EM Technology can solve the monumental problems facing mankind, those
related to food and the environment, while at the same time creating optimum health and social welfare. It has also brought about many developments that are allowing us to create a model for a future advanced information society based on co-existence and co-prosperity. It is clear that if EM becomes an integral part of daily life, as commonly used as water or air, and the derivative technologies related to it are put to use, the pledge of EM to create an “earth-saving revolution” will become a reality.

Since an innovative technology like EM fundamentally transforms standard practices, it is not easy to make it a widely accepted technology and philosophy. In order to do this we have used EM to solve many difficult issues we face and thus raised EM’s visibility in the world. But to establish EM in society it is critical to introduce it to welfare facilities to help them become more independent, and to have it become part of the environmental education curriculum at schools.

Another indispensible element is the creation of model enterprises in various industries and environmental fields, as well as the training of personnel. We have mainly handled this through EM instructor training workshops run by volunteers, in which we have seen great success.

The national NPO foundations EM Fukyu Kyokai (EM Outreach Association) and U-Net (United Networks for Earth Environment), with the cooperation of the INFRC (International Nature Farming Research Center) and EMRO (EM Research Organization), have also held advanced level EM instructor training workshops and have proactively trained personnel to disseminate EM Technology, but still I have felt keenly that, with the rapid developments in EM Technology, for it to become an integral part of society we must train EM Technology specialists in universities.

At The University of the Ryukyus personnel training consisted of a 2-credit standard education class (30 hour class) in “Environmentally Sustainable Agriculture” through EM Technology that I taught, a 2-credit course in pomology, as well as senior projects done in labs. About 100 students took the course on sustainable agriculture every year, while the number of those specializing in this was limited to 30. The number of students who could work directly with me in doing research in the lab was restricted, and even though we had over ten per year apply, unfortunately I could only accept three.

In March, 2007 I reached the mandatory age of retirement at The University of the Ryukyus and am now teaching at the International EM Research Center at Meio University, where I have been consulting with the university on the best way to train personnel in EM Technology. As a result we have decided to open a 10-credit (150 hour) course on EM beginning in April, 2009. Through this we will be able to start real personnel training in EM Technology.


The EM Curriculum at Meio University

Meio University, located in Nago City in Okinawa, was founded by Okinawa Prefecture and the 12 municipalties of northern Okinawa with government assistance, in order to promote the development of the northern part of Okinawa. In other words it is a joint state-private university, but as the name Nago Gakuen, by which it is often referred, reveals, Nago City is mainly in charge of operations of the university, and it has the lowest tuition of all private universities in Japan. EM classes as mainly part of the Tourist Industry major in the International Division, but no matter what school or major a student belongs to, the credits are accepted as basic units.

We will begin by offering 5 ten-credit EM-related classes, which include: Introduction to EM (covering agriculture and the environment), the one that I teach; Microbiology (EM foundations); Improving Life through Effective Microorganisms, a course in the applications of EM; Environmental Protection and EM (using EM Technology to deal with the environment); and Mechanisms to Purify the Environment (mostly fieldwork). We are preparing to steadily increase the number of EM courses, based on student desires and societal needs, create an EM Technology major (department), and eventually a division of EM studies.

Thus we have begun the first genuine EM Technology personnel training in the country. In particular we would like to emphasize the needs of the tourist industry for “functional, safe food” and “ a clean environment and abundant nature.” Additionally, we have plans for a number of alternative programs, including extracurricular activities and study programs both within Japan and abroad.

To do this it is imperative to train personnel who have a high level of competence in nature farming and organic farming and who are able to respond to environmental issues. We are actively recruiting students from agricultural high schools, though naturally we also welcome students from ordinary high schools who have an interest in agriculture and the environment. For the students entering next year we plan to increase the number of courses by at least 10 credits per year so that they can minor in EM Technology.

The Activities of Graduates

Through this process we plan, through the help of EMRO and EM related organizations, to help find employment for EM graduates throughout Japan. There are over 200 EM-related organizations in Japan, and with the passage of the Organic Agriculture Promotion Law in 2007 organic agriculture model towns will be set up throughout the country and there will be a great need for trained personnel.

This law requires “the country, prefectures, and local governing bodies to promote organic agriculture.” Because of this, public contact points to promote organic agriculture will be established not only at the prefectural level but also at the local level of towns and villages. However the personnel training needed to respond to this has been completely missing from agriculture school in universities and at experimental research facilities, so much so that in fact there are no such specialists at present. Thus Meio University will be the sole university in Japan that is actively educating students in nature farming and organic farming and is training the personnel that are needed.

In the future, in Okinawa and any other prefecture in Japan where there are more than 4-5 graduates of the program who wish to pursue independent farming, we plan to, with the cooperation of local governing bodies and EMRO, establish local agricultural foundations for which, EMRO will foot the entire cost until they are able to operate independently. We are putting the final touches on plans to create model farms throughout the country that will produce safe, functional food, actively clean the environment, leading to a more abundant, fruitful natural environment, while operating in a highly efficient, economical fashion.

Therefore we greatly welcome applicants from agriculture high schools not just in Okinawa but from all over Japan. At present our country is aiming at a change in policy that will focus on a tourist-based economy. Needless to say, tourism is based on safety and abundant hospitality, a beautiful country with a pristine environment, and an abundance of healthful, delicious food. Since EM Technology is constantly developing, as a follow up we also plan to hold several three-day seminars annually that will be aimed at graduates of our program.

EM has developed at present to the point where it is the technology that can support not only the Organic Agriculture Promotion Law, but also the country as it transforms into a tourism-based economy. To reach this stage I have had enormous help from many people and I am very grateful to all of them. I hope for their continued support as we begin our focused program of personnel training. 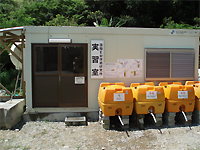 Labs adjacent to the Research Center. 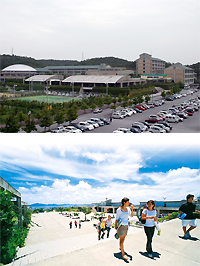 EM is also utilized in maintaining plants on the grounds of Meio University.