Seen from a different angle, the changes in weather because of global warming result from a reduction in the Earth’s energy rectification force. This is due to the various of types of pollution caused by population increase and the increase in the amount of energy used for economic development.

As countermeasures, it is necessary to implement emissions regulations for substances that cause global warming and increase the use of clean energy, as well as utilize technology to erase the radioactive materials that lightly contaminate the whole world. The conclusion is that, if EM is used throughout the world as freely as the air and water, the Earth’s rectification force will increase, entropy will be released to the outside of the system, everything will be purified, and it will be possible to find essential solutions to the problems of the present day.

It is evident that EM can eliminate or render harmless not only agrochemicals but such extreme pollutants as radioactive materials, which are viewed as impossible to deal with. Therefore, if we wish to, the whole world can become a safe, comfortable place where high quality and low cost products can be produced in a sustainable way.

Ultimate rectification force is a world of superconductivity, i.e. where electrical vibration and magnetic resistance are at zero. If you increase the purity and the density of EM, and continuously use EM in a layered manner harmful energy is rendered harmless or transformed into useful energy, and at room temperature the phenomenon of superconductivity appears. Therefore heat does not accumulate.

EM concrete has a useful life of over 500 years, easily over 1,000 years is properly maintained, and additionally the power-saving effects of such concrete housing is 35-50% or more, the people who live there will be healthier, and from circumstantial evidence it is clear that these dwellings will have a 35-50% increase in seismic resistance.

Also, I hear many testimonies that if you wear a EM plate (SPACE MATE) you will feel better physically, and even if you have a bad car accident and the car was totaled, you will come uninjured or with only a scratch.

As I pursue the mysterious phenomenon of EM, I arrived at the idea that its effects are due to electronic and magnetic rectification force. Many events occurred one after another that led me to the inevitable assumption that these are due to the rectification of the gravity waves produced by the gravitons that EM emits.


Until now, to deal with such natural disasters as typhoons, earthquakes and lightning, countermeasures have included strengthening buildings and setting up lightning rods, but we need to understand that shock waves are central to these disasters.

Shock waves are caused by the collision of a huge amount of energy, but if the energy is rectified no shock waves will occur.

In the present day throughout the country there are houses built using EM architecture and houses maintained using EM. We have been interviewing people living in these houses from areas where earthquakes have occurred and it is not uncommon for them to say that magnitude 5 earthquakes only felt as if they are magnitude 3, and that not even one cup fell off their shelves during earthquakes.

The Tsu Country Club in Tsu City, Mie Prefecture, known as a “golf course in the sky,” has been maintained using EM for ten years. The course was previously plagued by power outages caused by lightning, but this is now a thing of the past. We have also confirmed that other golf courses and farms that have continued to use EM have had no lightning strikes whatsoever, very welcome news in dealing with earthquakes and lightning.  Based on these experiences I have to come to believe that the same principles can be applied to typhoons. In my own experimental farm I installed an EM gravitron rectifying device, set a barrier line and observed the results. It was quite effective, though it is not easy to implement this.

On November 13, 2013, as an energy saving device for the EM Wellness Resort Hotel Costa Vista and EM · X Gold manufacturing plant, we set up an EM gravitron rectifying device. Fortunately, because it was clear that both return currents very much rectified the Okinawa main island current, it was effective not only as a typhoon measure, but EM was also effective in electromagnetic wave measures over a wide area, and various effects as a social experiment could be observed.

Also in early July this year, another huge typhoon came, similar to the one last year, but damage just slightly away from the location where the main impact of the wind hit was significantly reduced. It is estimated that crop damage from last year’s typhoon reached 2-3 billion yen, but this time the prefecture announced the damage was 500 million yen.

Results of a singularity check wave survey showed that the sky over Okinawa had a resuscitation barrier of 55km. Sunlight that passed through the barrier shows a significant reduction in the harmful effects of ultraviolet rays, so sunburn caused by direct exposure was also greatly reduced. The rainwater also became like very pure spring water, no PM2.5 damage at all occurred, and because the rainfall cleaned everything whenever it fell, cars became clean and shiny, as did buildings and houses, and there was a significant reduction in lightning strikes.


Exhaust gas on highways high-speed road was purified, soot in tunnels also disappeared, and tourists who visit Okinawa are greatly satisfied with the feeling of the “indescribably pure air.” Since the adverse effects of electromagnetic waves of electrical appliances has decreased, the academic achievement of school children has skyrocketed.

We have confirmed many reports that rust on buildings has disappeared and that the machines have not deteriorated as much as before. These results are consistent with the essential effects of EM: anti-oxidation, non-ionization, and detoxification of harmful energy and its conversion into useful energy. Only one and a half years have elapsed since this social experiment began, but I am confident that in 3-5 years we will see steady results that no one can deny. 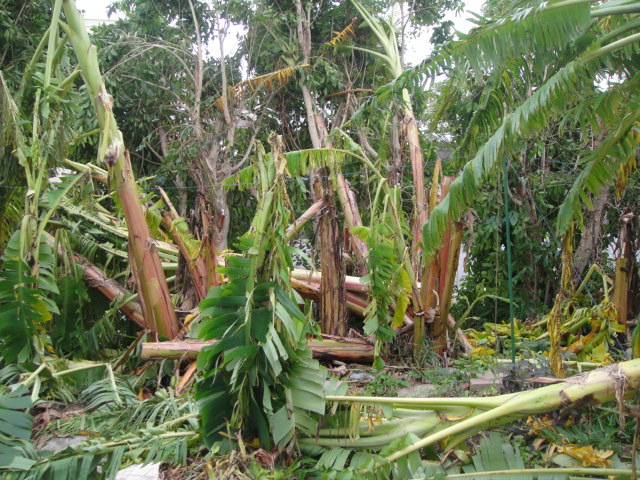 The place where the barrier line broke and the typhoon struck. 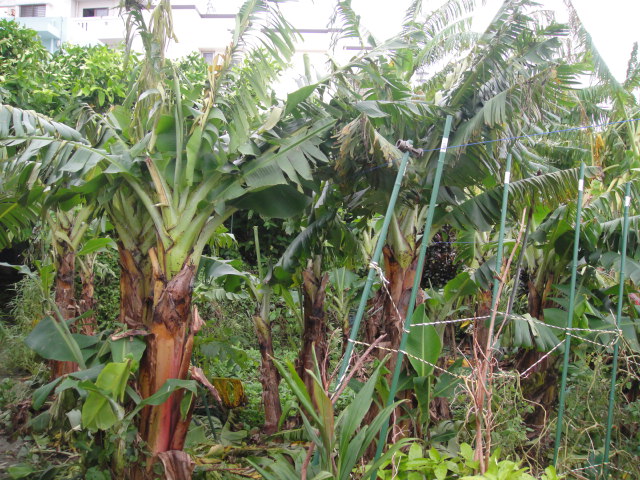 Where the barrier line is functioning. 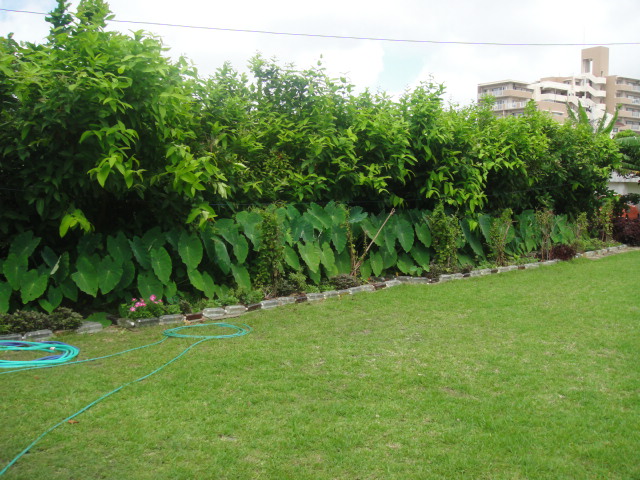 Courtyard of taro and wax apple (fruit), before the typhoon. 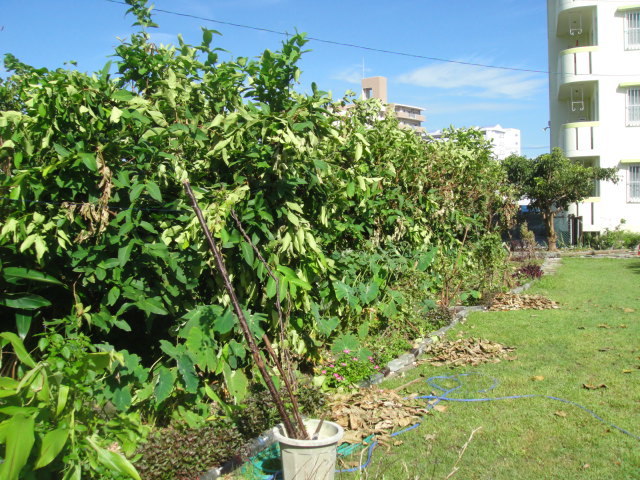 Courtyard of taro and wax apple after the typhoon. (Barrier line towards the back was cut off.) 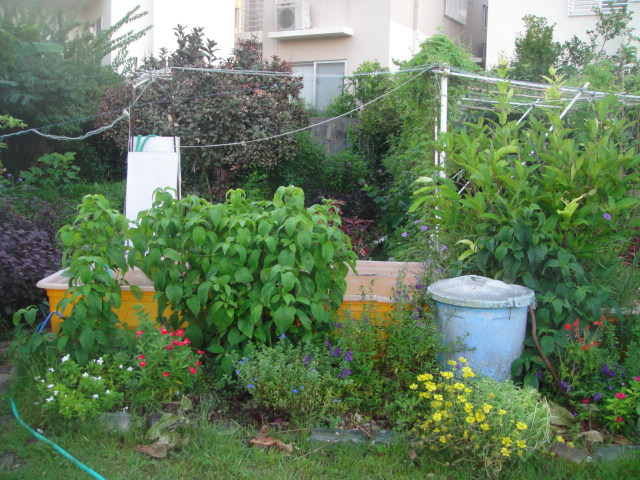 The back of the courtyard where the barrier line was not broken, after the typhoon. (Undamaged.) 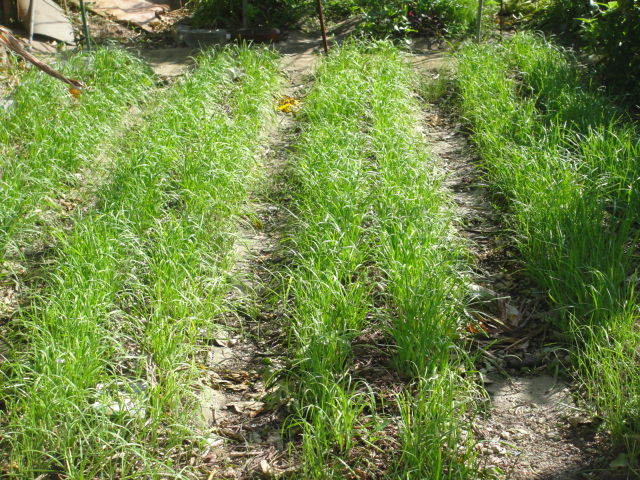 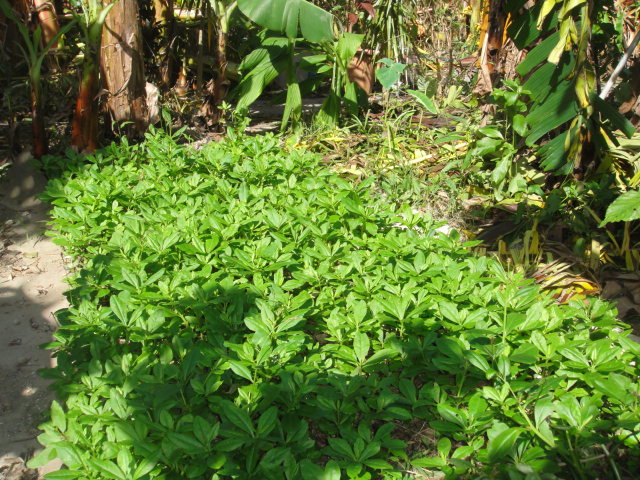 Brazil purslane three days after the typhoon. (The tips of the leaves usually become brown.)