Weather disaster due to abnormally high and low temperatures--storms, heavy rain, lightning, salt damage, floods, droughts--has become even more extreme year by year. If you look at history, it’s all happened before, however these once–in-a-century or once-every-50 year disasters are occurring frequently.

The way I understand it, this is caused by a worldwide decline in rectification function that I discussed in issue #82 of this column. In the 33 years since I put EM into practical use, I have amassed a variety of unusual information.

It is a clear fact that various weather disasters will be reduced significantly if one continues to thoroughly use EM. For instance, lightning will no longer fall at all, and only studios and houses that had been using EM remained when a debris flow occurred. If a magnitude 5 earthquake occurs, houses built using EM architecture only sway as much as if the earthquake was magnitude 3. This sort of story has become common in EM architecture now.

From the evening of July 7th till the morning of the 9th Okinawa suffered the kind of large-scale typhoon that occurs but once in 50 years, with over 400mm of heavy rain and strong winds for more than 48 hours. I have been involved in agriculture for more than 60 years, but among the typhoons I have directly observed, I have never witnessed such intense wind and rain lasting such a long time. I am able now, viewing this from the standpoint of the rectification force of EM, to envision various measures to deal with severe weather.

My own experimental farm, “Blue Sky Palace Farm,” has a line of woven aluminum chemical fiber used for electric fences stretched around it, types of partitions every 5m, and EM rectifying devices wrapped around them in 20 spots. I have connected a 100 volts cord to the line, but there is no current flow; instead it is based on the idea of applying potential voltage. 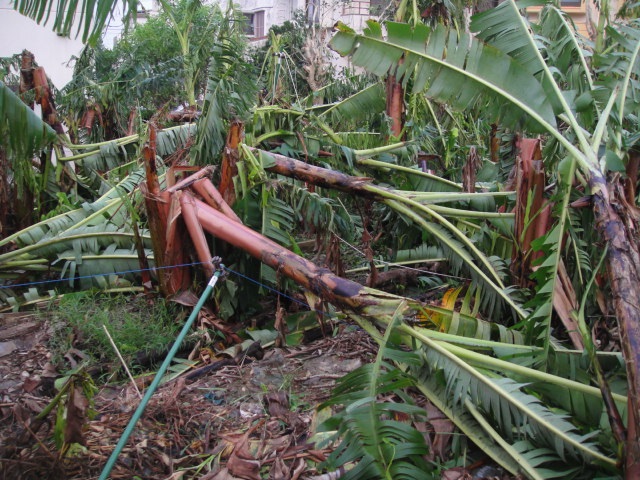 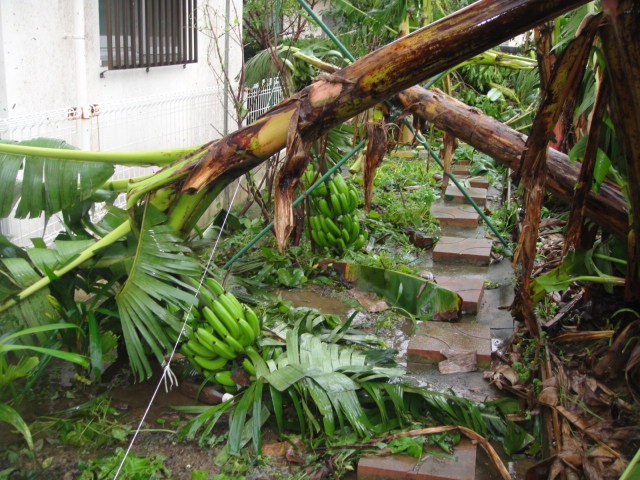 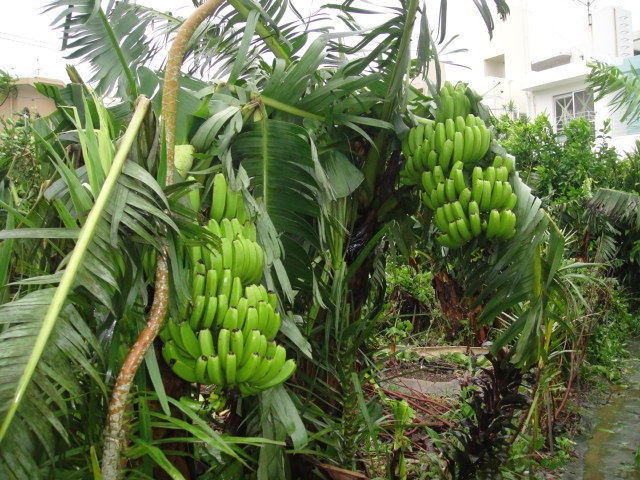 Photo 1 shows that in the banana garden trees that were higher than the rectified line were completely damaged.
On the other hand, photo 2 shows that the banana plants which are the same height as the rectification line or lower than the line, did not break off, and all remain undamaged. no break banana low tree height of less, they were left all for it. Of course I know that it is difficult to arrive at any definite conclusion because the wind blowing against them changes depending on location, but in a typhoon several years ago that blew from the same direction, the same varieties of bananas were damaged and broken, and the same phenomenon has appeared across the country.

Banana leaves that remained have been completely damaged, but if past experience is anything to go by, if organic fertilizer is provided and EM is diligently applied, it will be possible to have a wonderful harvest of bananas. 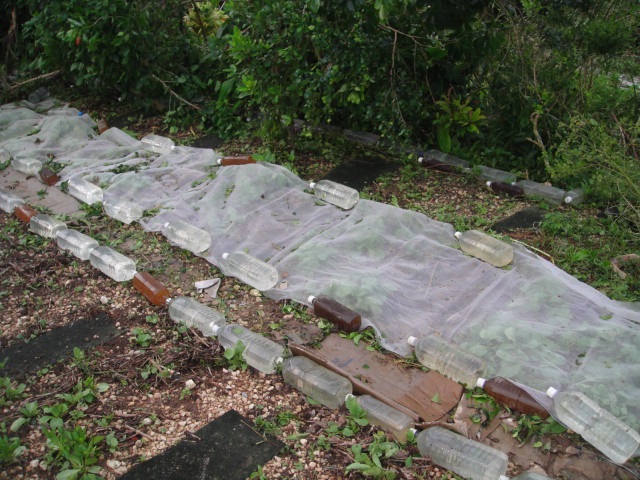 I have been giving away produce from my experimental farm to about 60 to 80 people every week, year round, and because it is open culture, it is essential to take measures against heavy rain storms and strong wind. In the summer I especially raise heat resistant vegetables and flowers such as mustard, garlic chives, Brazil purslane, Yunnan Baiyao and others. Before the typhoon season comes, I make a 1:5 dilution of Activated EM, apply it over the field with a watering can and make sure to saturate the soil with Activated EM. As in photo 3, I then cover the soil with a non woven fabric net. (You can also apply Activated EM solution directly over the net). 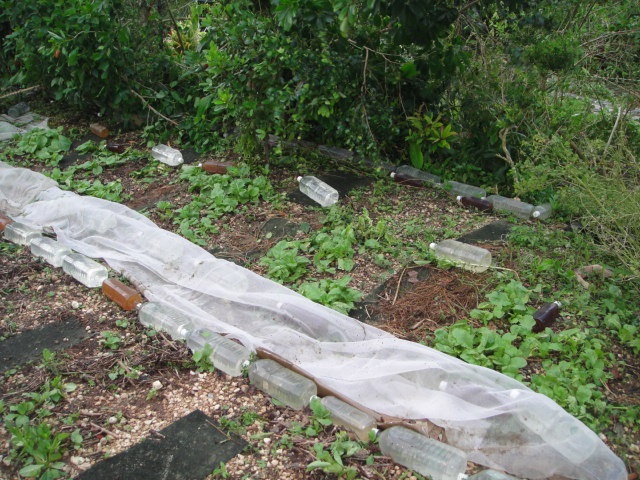 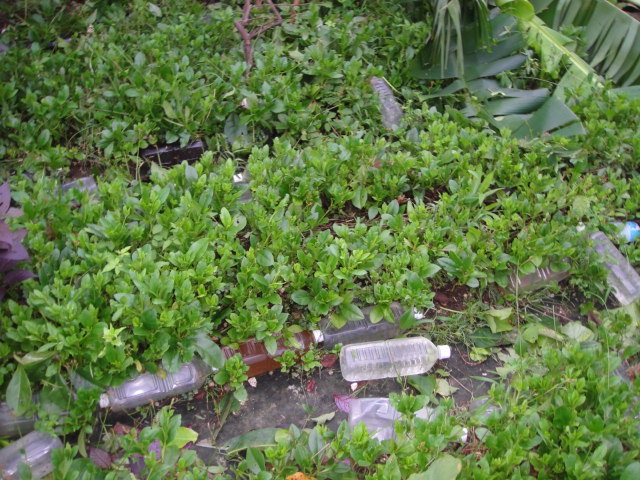 I set the net as an EM barrier and place 1-2 liter plastic bottles filled with either water or Activated EM on top of the net to holed it down. Photo 4 shows how the mustard is growing under the net. Photo 5 shows how well Brazil purslane is growing under the net. Both the mustard and Brazil purslane are intact and undamaged.
On the other hand, photo 6 shows mustard grown without a net, and nothing is growing at all. After the typhoon passes and the rain stops, I am going to spray a 1:5-10 solution of EM on top of the net so that the whole will get wet. If we stick to such a method, it is possible to cope quite well with heavy rains and typhoons. 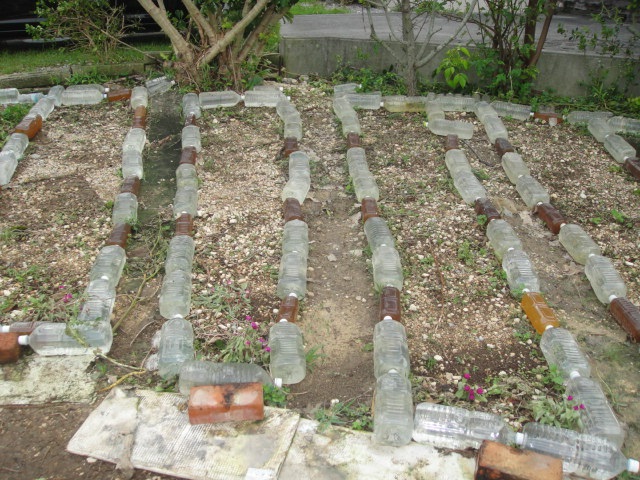 Sanitation and health measures using EM after floods and typhoons have spread all over the world now, but there are only limited cases of municipalities using EM in this way. Typhoon No. 8 has alerted us again to the use of EM in dealing with weather disasters, a point that has been forgotten. In this series so far, I have mentioned a number of times about weather disaster measures using EM, and bear in mind that most disasters take place because unrectified energy changes into shock waves. We should not forget to make the application of the rectification force of EM part of our daily routine and lives.