In this site I have often introduced the spread of EM Technology in Malaysia, and the process by which EM has been disseminated and developed there has allowed Malaysia to reach a quite advanced level. When EM is widely disseminated and used, all the major issues facing mankind—food (agriculture), the environment (protecting all life and biological diversity), health and medicine, energy resources—can be solved, education and society can be productively transformed, and a society with a high level of contentment can be achieved, a sophisticated information society where people co-exist and co-prosper.

Judging from the technical achievements we have already seen, employing an EM system allows food resources to be more than adequate even if the world population exceeds 10 billion, and that food production process will resolve the majority of environmental issues. However the question of pollution by invisible, intangible elements such as radiation and electromagnetic waves remains.

Through the accident at the Fukushima Daiichi Nuclear Power Plant caused by the Great Japan East Earthquake on March 11, 2011, EM has directly come to grips with radiation. Based on research results in Belarus, one of the countries effected by the Chernobyl nuclear accident, EM has been able to show its true power by markedly reducing radiation levels in populated areas, helping produce safe agricultural products totally free of radioactive materials, and by resolving problems of internal radiation exposure. (See The Law of Syntropy [Revitalization], edited by U-Net.)

EM-related products that counter electromagnetic waves are already on the market, and in this field—measures against wave radiation—we already have the perfect answer. Therefore if EM is applied thoroughly to issues of food and the environment, medical and health problems will be solved, though many issues remain to incorporate EM as part of the social system.

Because of this, I have been emphasizing the idea of living a complete EM lifestyle, but we are now beginning to deal with the fourth technical issue, namely energy resources. Resource conservation and the development of new energy sources are critical, and I have felt keenly the need for the creation of a regional model.

In Malaysia EM has been systematically introduced through a combined effort by both the government and ordinary citizens. As I have discussed in earlier columns, this came about through the efforts of Mr. Sawada, and has also been spurred on by the great many Malaysian people in various fields who have attended special workshops in Thailand that introduce the latest EM case studies. The number of Malaysians attending far exceeds that of people from other Asian countries, and the percentage of Malaysians attending workshops in Okinawa on construction, energy conservation, and health is also far and away the highest.

When considering energy resource issues, the fundamental starting point is that careful, long term use of resources is crucial. In the construction field the life of buildings is doubled through use of EM, which by itself is a revolutionary energy saving development. As I have discussed earlier, EM concrete can last over 550 years, and depending on the way it is managed, over 1,000 years. In Japan asphalt roads need to be resurfaced every five years, at a cost exceeding 5 trillion yen. If EM is used, though, the asphalt can last over 50 years. Even an old concrete building like the EM Wellness Resort Hotel Costa Vista can, depending on how it’s maintained, last much longer than would be commonly expected. This reality is steadily becoming known, although it is not easy to get the construction industry to utilize EM.

EM buildings not only make the residents healthy. Because EM converts harmful energy, electric bills for air conditioning can also be cut in half, and it is possible to completely eliminate the harmful effects of electromagnetic waves. EM buildings are very earthquake-proof, so there is no need for extra measures to be taken. Regarding the mechanism by which EM provides earthquake-proofing, it is believed that when a strong shock creates electromagnetic waves, EM passes these through an electrical field, returning them to a magnetic field, and in practical usage EM buildings have proven quite earthquake resistant.

In Johor State in Malaysia, which I have already introduced in this site, the international developer Tanah Sutera Development has been using EM in building construction for several years with increasingly good results. The president of the company, Steven Shum, has been very active in having the company be socially responsible, and has contributed well over ten million yen to the NPO U-Net’s EM Project to support reconstruction after the Great East Japan Earthquake.

Tanah Sutera Development has already built several hundred EM apartments and has constructed a school and shopping center using EM. This project began three years ago, and includes hospitals and welfare institutions, and with Singapore right next door it has become a model town for all of Asia.

In order to aid it in these efforts EMRO, with the cooperation of Tanah Sutera, several years ago opened a Malaysian office in Johor State and built a factory to manufacture EM for construction use. The AEON Group also has a store in the Sutera Shopping Mall, and environmental management of the mall is entirely done with EM.

With this as background, in order to be a liaison for general EM information, EMRO has opened its first company store abroad in Johor State, and has been aiding the effort to promote and help build an EM model town. As seen in the photo to the right, the EM Green Life store was opened on April 24th. Also, an EM lecture was held in the courtyard of the shopping mall, attended by numerous people, the majority of whom decided they wanted to try using EM in their daily lives.

Because of time constraints I wasn’t able to check every detail of the EM model town, but I was able to tour the completed Matahari Elementary School (which will have 3,500 pupils). Because EM vastly improves cement’s flow adjustability, they were able to use the unfinished concrete method of construction and were thus able to keep construction costs down significantly. The photos show the school’s main entrance, exterior, and first floor connecting passageway.

Malaysia in the end of April is quite hot, yet the concrete walls in direct sunlight did not retain heat and were cool. President Shum had never experienced this before and was very surprised. The first floor connecting passageway was especially cool, as if air conditioned, and several people who accompanied us were amazed. “I know what Dr. Higa means now,” some commented, “when he says air conditioning bills can be cut in half.”

Water treatment at the school is done through the water impoundment method. EM is added to the water and only the clean supernatant water is then returned to the river. There is no foul odor or sludge, and I heard that the water downstream has become cleaner and the number of fish has increased. This is probably the cheapest and most effective water treatment method in the world, one that protects biodiversity and enriches the environment. It is easy, too, to make this into a visually appealing river front park.

I am particularly looking forward to the successes the children achieve. Surrounded as they are by EM waves, I expect they will be quite healthy and improve academically. As EM improves relations between people, I think these children, too, will all get along well and there will be no bullying in the school. There are also plans to link up with a nearby welfare institution and begin EM environmental education classes.

Next year President Shum will be building a hospital that focuses on the use of EM in construction, and will create a system to recycle kitchen waste from the subdivision, connecting the city and farm villages. These developments are being favorably viewed not only by the state government, but by many related developers as well, and there are plans for several large scale developers to participate within the next few years.

In the midst of this trend, EMRO is responsible for providing EM for construction use, and sees as its duty the completion of the international EM model town. On my recent trip to Malaysia I received much information from many fields showing how they have had world class results in a number of areas, including the environment, agriculture, and fisheries, and I was able to confirm that both local and central governments are well-disposed toward EM and willing to actively support its use. On the way home I gave a lecture at the Nihonjinkai Kaikan (Japanese Meeting Hall) in Singapore to an almost a full house, and found that most of the attendees were already quite familiar with EM. Mr. Tsujimoto’s efforts have really paid off, and I am looking forward to future developments. Dr. Higa’s book The Law of Syntropy (Revitalization), which summarizes the ways in which reconstruction was carried out after the Great East Japan Earthquake.

The EM Green Life store, which opened on April 24th.

The Matahari Elementary School. The entire complex was made using EM. 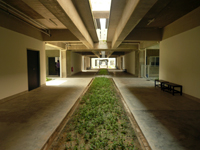 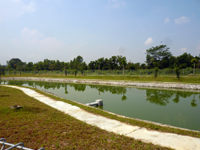