In the previous issue, I described the creation of super plants through the use of EM, namely that the essence of breakthroughs in limits is due to the energy rectification force of EM. Limit breakthrough is a phenomenon in which the level that has been considered as a limit is easily exceeded; in most cases this remains at the quantitative level.

One tomato plant grown with devoted care given to temperature management, nutrition supply, and pest control will bear over a thousand tomatoes, however there is no major change in the state of its production of fruit. It will not exceed the characteristics of its genetic variety, and will merely increase in quantity.

In contrast, bananas, which I introduced in the previous issue, clearly transcend the genetic characteristics of the variety. I have grown the same variety of banana (more than 100 plants) using EM for over 10 years, and this was the first time I harvested two bunches of bananas on the stem of one of them. I am confident that such a phenomenon will never occur in normally cultivated varieties. I say this because originally my specialty was tropical fruit trees, and I have been teaching banana cultivation for many years in various parts of the world.

EM is used in the majority of organic bananas grown in Latin America, and EM is widely used in banana cultivation throughout Asia, but up till now there has never been a report of two bunches of bananas growing in a single stem. However, starting last year, in my banana orchard three plants have shown this phenomenon of limit breakthrough, and since the beginning of this year the phenomenon has been seen in about ten plants.

Indeed, I have been using EM thoroughly from a few years ago, and in my experimental orchard (which I call a blue sky palace for plants) productivity has increased to the same level as plant factories, and visitors have definitely had an eye-opening experience. So far, as I have mentioned many times on this website, I apply 400 liters of good quality Activated EM to 10a per month, and I always add a 1:1000 concentration of EM Super Cera-C it.

At the same time, I buried EM mud balls made with EM Super Cera-C (1:100-500 ratio) into the soil at a depth of 30-40cm, with a 1-1.5m interval between mud balls. In addition, I put in an EM barrier to keep out wildlife.  I put all organic matter generated from my garden back into the soil as a layer of grass and saturated it with activated EM after it rained, and applied a 5-10 part dilution whenever it dried out. I manage my garden according to “Best way to use EM” described in the previous issue.

In addition, since I am also pursuing a breakthrough in increased yield, I use chicken manure bokashi that has been treated with EM as needed. Before I realized it, pests had disappeared, and Yamabotaru (Luciola, flashing fireflies) now flutter around between the banana trees (in May and June). I grow seven types of banana, and the limit breakthrough phenomenon has appeared in two of the dwarf varieties. The yield and quality (sugar content) of the other varieties also far exceeds what one would normally expect of these varieties.

From last year, a virus that effects papaya no longer occurs, harmful nematodes and banana weevils that are the cause continuous crop damage in bananas have also disappeared, and banana black flies are gone. Typhoon damage and damage by birds has also been significantly reduced by the EM barrier. Even in a heavy rain of 100 mm per hour, the topsoil does not flow away, with most of the water percolating down into the ground. The soil has become much stronger against drought, and damage due to disastrous weather has also been dramatically reduced.

Given this background, it is unnecessary to improve varieties by genetic recombination. Current gene recombination is focused on the development of crop varieties that will grow in soil that has been degraded by continuous use of chemical fertilizers and pesticides, and tries to resolve the issue by incorporating genes that will function in poor conditions. This does not take into account the perspective of substantial improvement of the soil.

Needless to say, substantial improvement of the soil involves focused management of the soil’s microflora (microbiome) so that it contains beneficial bacteria and these increase in density. Most beneficial bacteria have micro coils and rectification catalytic force, and they have an extremely effective rectification function. Therefore, most of the conventional improvements to soil will be unnecessary.

Plant factories and plant breeding ignore the essential functions of the soil and real improvement, and ignore the activity of beneficial microorganisms and enzyme function; because of this, there is a risk of monster crops developing over the long term.  If you look at the situation in terms of protecting the ecosystem and biodiversity, agricultural technology up till now has been the worst possible approach. We need to change direction, with the management of the microbiome (microflora) taking precedent.

The photo below is provided by Mr. Ono of the Nature Farming Science and Technology Institute in Tsu City, Mie prefecture. Their method is in accordance with the approach taken in the Sunshine Farm, an EM Research Organization model farm, and in my own experimental farm. The cabbage usually harvested in spring has become a kind of super variety. 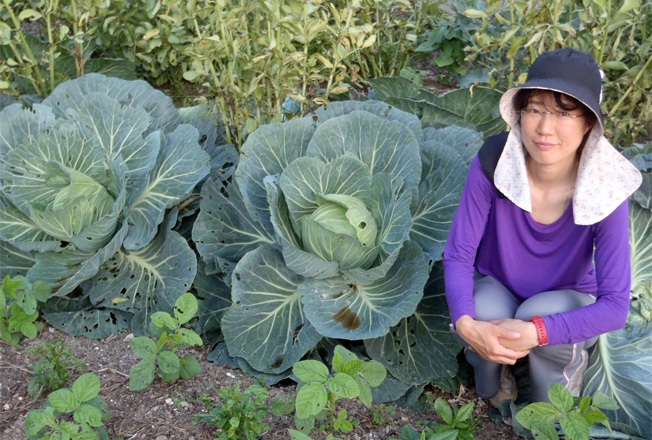