#20 The Beginning of a New Era


As we welcome in the new year, 2009, I would like to celebrate, along with all those who are involved with EMTM, the great accomplishments of the past year.

As the mechanism behind subprime loans in the US has come to light, the pyramid schemes of the financial industry have fallen apart, and this had a very serious effect on the actual economy. It is said that the financial loss will be between 2,000-3,000 trillion yen, with some predicting losses as high as 6,000 trillion yen.

Such an enormous amount could have financed the Second World War several times over, with money to spare, and countries that have gotten carried away with this system have been dealt a devastating blow. Countless people have lost everything, as if a Third World War had actually taken place. To be quite frank about it, the bubble affecting the whole world now is the phenomenon of the collapse of capitalism, and the roots of this are the same as those of the earlier collapse of socialism.

In short, we see here how bankrupt is the gaming-type concept that transforms everything into data, and that believes that the market and society can be managed scientifically and theoretically. As a result, the two-tiered structure of the world has come into sharper focus, and we see the importance of the analog parts that cannot be quantified as data in creating the future of humanity.

Plainly speaking, there are two principles that make up the world, one based on the marketplace, competitive principle in which everything is turned into data (digitalization) in a competitive game in which money decides the outcome, and the other that stresses consideration, civic mindedness, and volunteerism that cannot be quantitatively converted into data, a society based on the principle of coexistence that is not measureable in monetary terms.

I have long defined a society in which there is a high level of coexistence as one that is a contented society. It is a society where people live self-reliant lives, are content with less, and are not controlled by a money economy. Because Japan experienced the economic bubble of the 1990s, of all the advanced countries it has been the least effected by the present crisis. But behind this we also find proof that the basic Japanese-style of life is alive and well: a life that values nature, that finds spiritual value in hard, physical labor, that is based on morals and civic mindedness that avoids causing hardships for others, and that has a spirit of helpfulness and kindness to others.

The fact, too, that other industries have proactively taken in people who were downsized, that many groups and organizations have actively reached out to those in need, demonstrates how Japan has evolved in the information age.

Still, in order to deal with this unprecedented upheaval, there is no other choice than to, as a principle of personal responsibility, try to prevent illness, take good care of your own possessions and use them for as long as possible, live a sustainable lifestyle, and make efficient use of everything in a healthy cycle of life. For those involved with EMTM this may already be just common sense, but it is precisely in times of hardship that the real power of EMTM can be understood. Thus, this can be a real opportunity to create a society with a high level of contentment by making EMTM a public tool.

Towards a Contented Society

Needless to say, a society based on the principle of competition employs every available means in order to win, and in hindsight we can see that ruin is part of its very structure. Considering the level of present day technology, in which there is a close integration of economics and information, any problem should be amenable to a solution, but it goes without saying that the great damage that the principle of competition brings about originates in the vested interests and preconceived ideas inherent in this principle.

Creating a society where the level of contentment is high requires something that will guarantee a stable life once one rejects the principle of competition, otherwise it will be of no practical use. In order to do this, as I have discussed on many occasions, it is critical to construct a social system of coexistence and co-prosperity that aims at making “New Basic Human Rights” a reality.

I can state conclusively that as long as EMTM becomes as ordinary a part of life as water and the air, and is applied to all types of situations, these problems can be solved. It’s up to the will of the leaders involved.
In the beginning the EM Research Organization (EMRO) focused on how to activate and use EM・1®, but now this role has been fully taken over by volunteer groups. For that reason EMRO will turn its attention to creating a society with a higher level of contentment, and has begun various model enterprises that will lead to this.

First of all, last year we completed the EM Wellness Center (the Hotel Costa Vista, Spa Corazon, EM Clinic [Medical Corporation Okinawa Shokokai Clinic]. We took an essentially abandoned large hotel that was not being utilized anymore and through EMTM revitalizing construction have made it able to be used almost indefinitely to implement the concept of wellness (spiritual, emotional, and physical wellness producing happiness.) These successes also have revolutionary implications for the construction industry.

In terms of personnel training, with the cooperation of Meio University, students newly admitted this spring, no matter what department they are in, will be able to take ten credits (150 hours) of EMTM classes. If they take an additional program through the university’s International EM Research Center, they can become EMTM specialists. There is still time to participate in the second-round recommendations and general entrance exams, so please contact the examination center listed below.

From last fiscal year we strengthened our Local Development Department, and along with starting seminars to train advanced EMTM instructors, we also began actively developing municipal EM model businesses. This year we will develop these businesses further, and begin making EM model towns. I will discuss this in the next issue.

Dr. Higa has demonstrated the effectiveness of EMTM in his own fields. 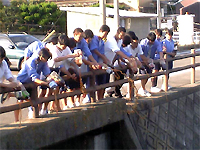 EM is being used by elementary schools and middle schools throughout Japan. 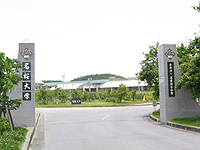 Meio University in Okinawa Prefecture where, starting this spring, students will be able to study EM TechnologyTM as a subject for academic credit.