The 16th National EM Technology Conference took place on February 26 at the Asahi Multipurpose Hall in Echizen Town, Fukui Prefecture. Starting in 1986, with Mr. Shoichiro Tabata taking the lead, Fukui Prefecture was the first place in Japan where EM was used in rice fields, and is an advanced prefecture in the use of EM, with EM improving yield and quality, controlling weeds, and having good results in no-tilling farming and lodging prevention. In the twenty-five years since EM was first used there, I have visited the prefecture some twenty times to advise on such things as planting flower beds to improve towns, and it is the one prefecture in Japan where the most number of lectures and other events have been held.

Echizen Town, where this Hokuriku Region Conference was held, includes the former Miyazaki Village, which was merged into Echizen, and the results seen in Miyazaki Village have spread to Echizen Town. I have discussed the successes using EM in Miyazkai Village several times in this column, introducing the village as a model of using EM to promote local development and revitalization, and I have stated strongly many times that all of Japan should follow the lead of Miyazaki Village.

There were over 850 participants at the conference, standing room only, and the hall was filled with enthusiastic EM users from the Hokuriku region, mainly from Fukui. We were honored by the presence of Mr. Nishikawa, the governor of Fukui, and many other town government and town council members were in attendance, including Mr. Seki, the town mayor, and Mr. Aoki, head of the town council. Because the chair of the planning committee was Mr. Tanaka, member of the prefectural assembly, there were several other prefectural assemblymen and others from the prefectural government in attendance; the conference really made me feel quite keenly how widely EM has been disseminated in Fukui Prefecture. I was also able to meet Mr. Kimura, the former village head of Miyazaki Village, for the first time in quite a while.

Mr. Tsurunen Marutei, member of the national House of Councilors, came, not just as an honored guest, but as a longtime EM user. He gave us much information about activities in the Diet, and we had him give a lecture at the plenary session of the national EM Outreach Association. The highlight of the conference was the contents of the 2011 Case Study Collection. This volume is filled with a variety of knowhow gained by EM users who have unflaggingly used EM over the past 25 years, and these case studies will help deal with the requests of those in municipal governments. It is a fount of information, filled with many ideas that can be of use to both veteran EM users and those new to EM.

Seeking Cultivation Systems that Provide High Quality and Workability in Large Scale Management
Because of time constraints we had just four presenters. The first presenter was Mr. Michiaki Yoshida, of Nagahama City, Shiga Prefecture, who is cultivating 12 of his 28 hectares of rice field following Nature Framing methods, using EM with no agro-chemicals or chemical fertilizers. From the beginning he has insisted on using no agro-chemicals or chemical fertilizers, and through a happy turn of fate he learned about the power of EM, and tested the possibilities of EM, and has had good results. Most small-scale farms stop at this level. At this level there is a tendency to just want to sell high quality rice at the highest possible price, but Mr. Yoshida’s corporate philosophy was “To provide safe and delicious rice to as many people as possible.” The Longevity Rice brand grown at Yoshida Farm follows this corporate philosophy and was given this name in the hope that people eating it would be able to live long, healthy lives. Beyond the name, solid proof of the quality of Mr. Yoshida’s rice is found in that fact that in 2006 he won the gold medal in the Young Agricultural Producers Division at the National Rice and Food Taste Analysis Competition.

Afterwards he was featured in the Mainichi Newspaper and in local newspapers and has taken on the challenge of being an opinion leader in the field of using EM in large-scale rice production. Mr. Yoshida firmly believes in an ideal vision of agriculture that envisions changing the rice fields around Lake Biwa to using EM, which will make Lake Biwa not only cleaner and more abundant, but will protect biodiversity and human health.

Technically there are many challenges ahead before this can be implemented—a supply system for EM must be created that can meet the scale involved, as well as issues such as surface puddling and a method to apply EM intensively to unproductive rice fields. But solving these is just a matter of time.

Organic Cultivation that Can Be Put Into Practice by the Next Generation of Young People
The next presentation was a case study by Mr. Toshinobu Wada of Oyabe City in Toyama Prefecture. Of his 19.6 hectares of rice fields, Mr. Wada cultivated 3 hectares using EM organic cultivation. He tried many ways to reach his goal of 540kg of yield per 10 are. In order to use existing EM Technology in large scale rice farming, Mr. Wada improved farm implements, and came up with a way to insert Activated EM while using rice planting and weeding machinery. He also used vertical harrows, did organic surface treatment and root grinding, and through using EM in parallel, was able, before rice planting, to break down the rice straw and rice stubble.

This method was also effective in suppressing weeds such as Monchoria vaginalis and barnyard millet, though in cold regions it takes several years for things to be stabilized. In order to do this, along with other methods Mr. Wada designed a weeding machine that drags a chain behind it, and had great success with it. As with Mr. Yoshida, what sustained Mr. Wada in these attempts was a strong sense of mission in regards to agriculture. Now that the successor to his farm has been decided, I look forward to future developments.

A couple of years of continuous cropping is one thing, but doing it for ten years means that danger was always just around the corner. During that time Mr. Yamamura has had many close calls, but in each case has been able to overcome them by using Activated EM and organic bokashi. Why did he continue such an adventurous undertaking?

He was able to do this because he has a strong desire to develop the taro industry in Ono City, which has been limited by the rotation with rice planting, and also because he has the lofty goal of making all of Ono City use EM-based Nature Farming. Nowadays, when the decline of taro raising regions because of continuous cropping is well known, Mr. Yamamura’s work, which breaks through existing limits, must be given high marks.

From Local Residents’ Involvement in Waste Recycling to Environmental Education

The final presentation was by Ms. Mieko Kinoshita, director of the Asahi Waste Recycling Network of Echizen Town. Activities that began in the former Miyazaki Village have evolved into a more organized, active, and complete social movement.

The movement’s activities have spread to the entire region, and the 183 members and 2500 households that are involved now provide EM-grown vegetables for school lunches, help clean up rivers and the sea, and are involved in a variety of EM activities. The results of their activities are can be seen most clearly in the Asahi Umaiichi farmer’s market that is run every Tuesday and Saturday. The Town has actively cooperated in these activities, and local government has begun to solve various difficult social problems related to revitalizing localities, such as the issue of people having no social ties and problems related to the elderly. These, too, are the result of the Network’s leader, Ms. Kinoshita’s, strong desire to improve the environment and revitalize local society. This conforms to the theme of this National EM Technology Conference—“Making an Abundant, Beautiful Earth for our Children and Grandchildren”—and I am very much looking forward to their creative future developments.

The above is a simple summary of the four presentations. The 2011 Case Study Collection is filled with many such original, ambitious projects. Because the number of participants far exceeded original plans, we have done an additional printing of the Case Study volume. I highly recommend that local administrations throughout the country put into practice the successes found in the Hokuriku region.

Many dignitaries at the meeting, including Gov. Nishikawa, governor of Fukui Prefecture.

The enthusiastic, overflow crowd at the hall. 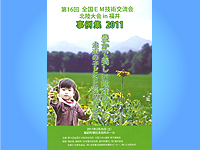