Many times in this series I have introduced Graviton (gravitational wave) farming as the ultimate application of quantum mechanics. The key point is to enhance the entanglement (managing of thoughts) on the right side of the Higa Theory chart (See Fig.1) and increase the quantum beat (coherence) on the left side. 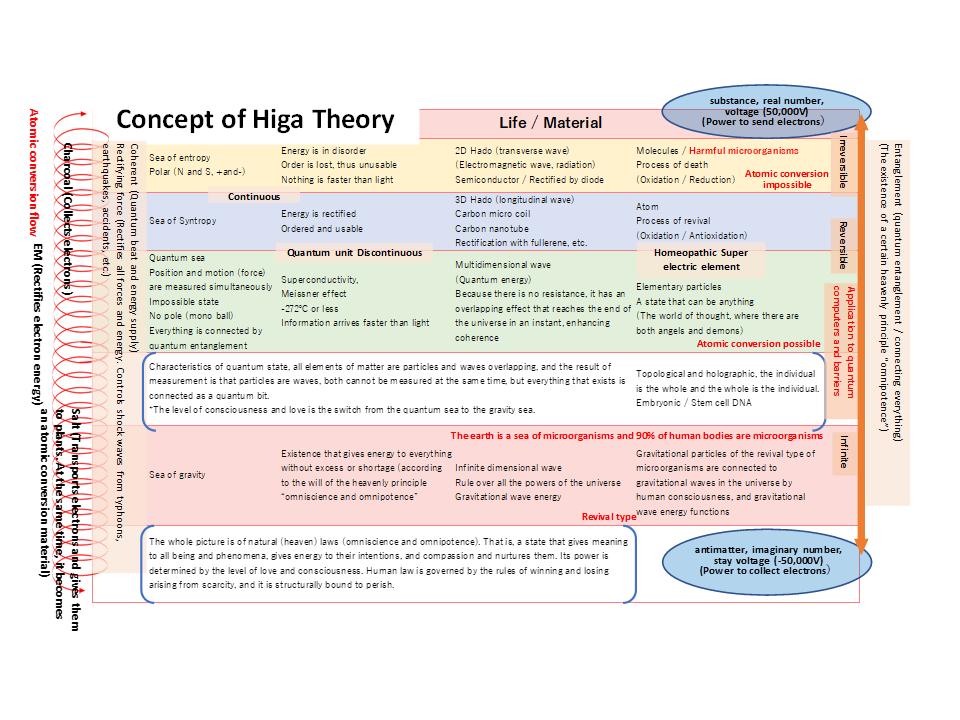 Quantum mechanics is the field that studies elementary particles that make up atoms, the smallest unit of matter, and the state of energy, etc. that determines their movements. It is a field that cannot be understood at all by conventional physics or chemistry, which views things as invariant, thus the well know saying, “Those who say they understand quantum mechanics don’t know quantum mechanics at all”.

The starting point of quantum mechanics is that light has a superimposed double structural property as both particles and waves, and when one is measured (fixed), the other property disappears (latent state), with the behavior depending on the consciousness of the measurer. In other words, everything is reversible and undefined, and for those who are in the real world where everything is determined and irreversible (the top part of Higa Theory), it is an incomprehensible field.Therefore, most people stumble at this elementary level, but you need to change your perspective and understand the concept of quantum states. In other words, before becoming matter, everything (elementary particles, elementary energies) exists in the opposite direction, and a fundamental concept to grasp is that the quantum state is one where they can change into anything (Higa Theory’s Third-stage quantum sea).

Therefore, in the quantum world, elements that can change from life to death, angels to demons, are evenly mixed, a state in which everything that humans can think can change to anything.It is the consciousness of the living organism that activates the state that changes to anything, and especially the consciousness (thoughts) of human beings are at the highest level. In other words, it is a world of will and desire. If we act with the intent to consolidate good things, the mutually contradictory quantum world that can change to anything will gradually manifest in a good direction over time.

This level is an enhancement of entanglement, but as a real force, quantum beats (coherent) need to be enhanced in order for this to be realized faster.That is, the existing quantum energy (elementary energy) must be rectified, aggregated and made to function. In graviton (gravitational wave) farming, the level of EM with a universal element function is raised, and charcoal and salt are used to create a barrier so that the energy from the fifth gravity sea of Higa Theory is concentrated. The key is to keep the levels constantly increasing with the application of layered effects. If the results are not what one expected, that means the level is low.The example introduced this time is from Mr. Fumiaki Yoshida of the EM study group in Mima City, Tokushima Prefecture, which was presented at the Shikoku EM Festa last year. Along with this, I would like everyone to relearn the importance of thoughts.


The Mima City Blueberry Study Group was established in 2007 and has been engaged in cultivation research. I was thinking about taking on a new challenge with my EM friends.Information about barriers was presented at the EM Festa in Kagawa in 2017, and after reading an introduction to barriers in Ecopure, I heard that it had already been introduced in Ehime Prefecture and was effective. Then, in November, I learned about them directly from Mr. Nomoto, chairman of Ehime EM Outreach Association, and I implemented EM barriers. I am grateful to Mr. Nomoto and other farmers who generously taught me when I visited Matsuyama. The materials (EM mudballs, activated EM charcoals, salt) were procured in-house and the activated EM solution was procured by the Ehime EM Outreach Association. I also bought an engine digger and started building EM barriers. Mr. Nomoto advised me, using the latest information, that I should set a radial barrier like the ribs of an umbrella, and although I was still skeptical, I have come to feel strongly that it was effective when I set it.
・What has changed (bird damage comparison)
Damage by birds can be eliminated by using birding nets, however they don’t withstand typhoons, and destructive damage can result. It is not possible to remove the net during every typhoon. Every year, the blueberry field, which has no net, suffered a great deal of bird damage. Blueberry-colored starling bird droppings overlapped under the electric lines. But not this year. Although more than 100 starlings flew in, only the area only around the blueberry field was damaged, and they tend not to enter the central area. However, there was no effect on sparrows. So far, using bright objects as a countermeasure to keep them away seems a bit more effective. I am currently experimenting with this.

・Hado function (Hado measurement results of blueberries)
The growth of blueberries has improved. I have been instructed by Mr. Tsumagari from EM Laboratory Co. Ltd. for three years, and have been irrigating by injecting activated EM liquid into the soil. Bushes damaged by longhorn beetles did not die and all sprouted the following year. The problem is that because of an enhanced hado level because of the barriers, growth is improved so much that the bushes actually grow too much. Currently we adjust this through pruning. If you prune them well, you can get a lot of delicious blueberries. More research is needed. I measured the hado levels of the fruit of the blueberries and found that the immunity is fourteen times higher than the commercial product, and eight other items exceed the measurement limits. Customer response has been quite positive. Blueberries after the rainy season have a high sugar content and are delicious. We ship them fresh and frozen, and freeze them so they can be made into processed products and jam.
・Does the plants change with the barrier? (sugar content and size)
The size and elongation of bush branches affects the size of blueberry fruit. This year, we had over a 100 times more large, 500 yen coin size blueberries than before. Last year, there were few this size, and two years ago, none. Sugar content tends to be lower as the size increases, but the ones the size of 50 yen coins tends to be higher due to varietal differences. Currently the highest sugar content is 18 degrees.

・Blueberries that can withstand typhoons
More than a dozen bushes fall each time a typhoon hit, but last year, although roof tiles flew away, there were no fallen bushes. After the typhoon, foliar spraying helped them to recover quickly.

・Are human thoughts conveyed to plants? “Thanks EM always.” (Care and maintenance and results)
I am learning about quantum mechanics, gaining the wisdom to do agriculture in a new way, always talking to the bushes in the blueberry fields. I told them things like, “It must be hard for you since bagworms ate most of your leaves” and “I got rid of all the bagworms, so cheer up and be healthy,” and then in September, the trees sprouted. I was able to share with them the feeling that we were rescued. Until now, there was no harvest for one year because I was pruning down to the root of the bushes. If you change your way of thinking and move forward, blueberries will always respond. I look forward to my daily walk through the blueberry fields.

・The importance of wishes and desires
The realization of this dream has been astonishing, with large, delicious blueberries through the use of EM. Although I have only begun to experience the effects of EM barriers that I learned about from reading Ecopure, I have been able to understand a little more how human consciousness is part of creating these barriers. If you truly care about them, everything you hope for will come true.
(January 16, 2020)