#133 How to enhance healthy Hado (wave energy) by EM

How to enhance healthy Hado (wave energy) by EM


In #132 of this series I introduced that idea that the soil microbiome (microflora) and the human microbiome are quite similar This law applies not only to the environment, but to all spaces and equipment in the biosphere.

From a quantum mechanical point of view, space and the universe are all full of energy, and in Higa theory (see page 51 of All in Love and Microorganisms, the source is gravity wave energy.

Because this world is determined by the level of the corresponding person, such as the level of thought and accumulation from the past, all the results are probabilistic and, strictly speaking, no two are exactly alike.

However, if the principle aspects are 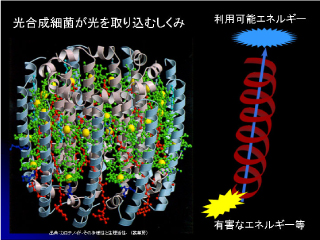 clarified and applied, stochastic reproducibility can be obtained. I have repeatedly described how EM has an antioxidative effect, a nonionizing effect, and functions to convert harmful energy into useful energy by electron transfer in a three-dimensional helical structure, and this power extends to all things.

See the picture on the right: A representative case of a three-dimensional (3D) helical structure, the helical light (energy) transmission system of phototrophic bacteria. (For details, refer to DND No. 61)

This diverse nature has a high correlation with the number of treatments as well as the quantity, so the conclusion is to continue the use of EM until it is effective.

As I have already introduced in DND etc., measures against radioactive contamination by EM (reduction of radiation dosage and suppression of absorption into crops) have been recognized in international conferences and international academic journals, criticisms of EM as so-called pseudoscience have completely disappeared.

However, the power of volunteers is limited when it comes to spraying EM in the conventional way across the vast disaster areas of Fukushima, though perhaps possible using funds from the national budget.

In order to solve this problem, we found, through various practical experiments, the method of utilizing the infinite graviton energy that enhances the rectifying power of EM.

This involves using charcoal and salt, raising the level of energy that can be used, and creating a boundary so that the energy does not disperse. The application of this method has already begun to be realized in Fukushima (see DND #130, “Gigantic Graviton Boundaries in Fukushima”), reaching levels that depend on the energy transfer and concentration through salt and charcoal.

At lectures and elsewhere people often ask me, “What material is best to use? ” I always answer them that it is best to try everything. However, since it is important to know this, I asked Mr. Nomoto, an EM goodwill ambassador, to cooperate in finding out. What he sent me shows the results of the edamame (green soybeans), cherry tomatoes and regular tomatoes from Iwate Himawari Garden. Mr. Toyama of Iwate Himawari Garden has been using EM for more than ten years, and he is a veteran member among EM users who has helped implement various cultivation methods. 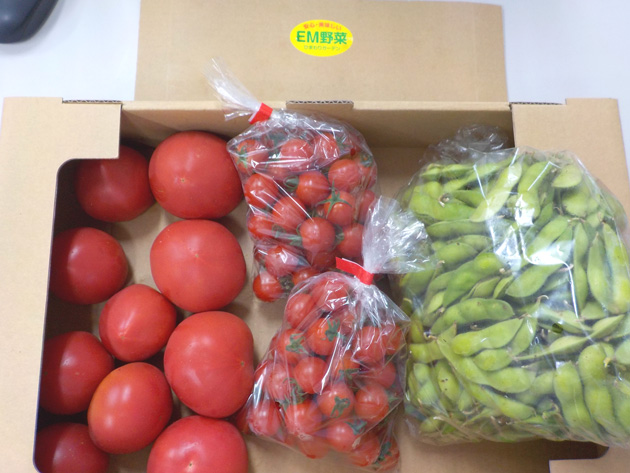 The cherry tomato results in the table show the results of using conventional EM (no salt applied), EM bokashi balls, plastic bottles of EM with EM Super Cera and charcoal. The Hado related to health has reached astonishing levels.

Regular tomatoes had higher levels than the cherry tomatoes on the left column, but this difference is due to an increased amount of EM bokashi balls and plastic bottles with EM, and a strengthened boundary. In terms of Hado, considerable enhancement effects have been observed. In general, it is common knowledge that the healthy Hado of cherry tomatoes is higher than in regular tomatoes. Therefore, strengthening the barrier has led to a major reversal in levels between the two.

Some people think that edamame and tomatoes cannot be compared, but in general tomatoes tend to be higher than edamame. 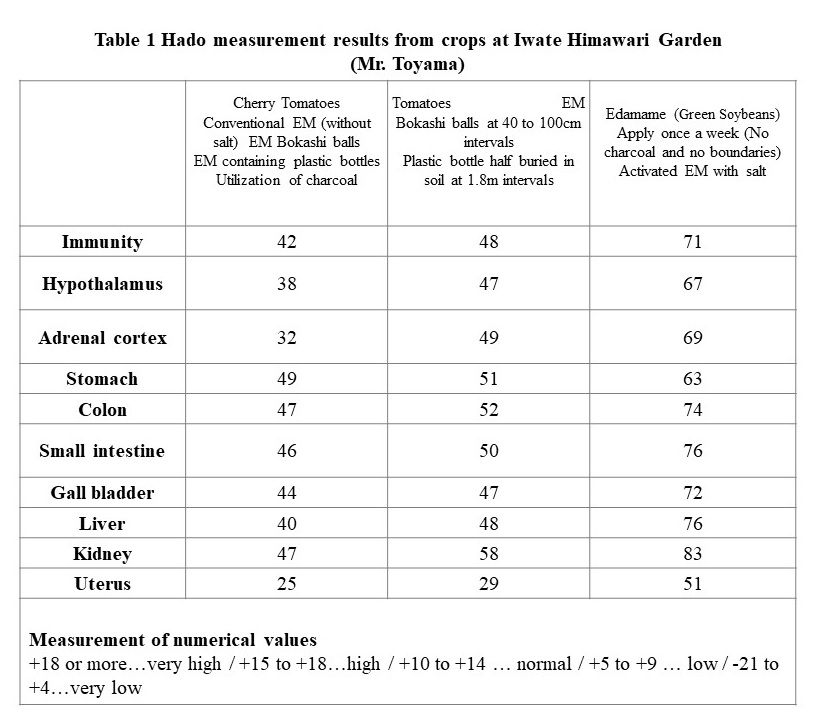 I have received a lot of information up till now from Mr. Nomoto, and it is clear that there is a big difference in the Hado, wave energy related to health, depending on the use of salt. If it is bothersome to create a barrier, you should concentrate on the use of activated EM solution with seawater (salted).