As I discussed in No. 165 of this series last year, the Gravitron Barrier on the Ryukyu Islands, which started in November 2013, has now reached a radius of 354 km throughout the entire Okinawa power grid (which currently extends 560 km to the south).

Electricity within the barrier now has photocatalytic properties, and is highly energy efficient, and there is marked decrease in salt pollution, which had been a problem on the islands. In fact, the entire Ryukyu Islands are getting cleaner year by year, with PM2.5, fine particles in the air, and exhaust gas and building pollution, having disappeared. Additionally, plants have become healthier and the natural ecosystem has gradually grown more abundant.

The rainfall has become less clustered and more like sacred water, the soil, which had been hard, has softened over the years, its water retention capacity has increased, pollution of the sea due to heavy rains has decreased, coral has revived, and large fish can now be caught along the coasts.

The Gravitron barrier has been strengthened over the years, with plant viruses beginning to disappear in 2017; since 2018 even the strongest papaya virus has completely disappeared, when the barrier was strengthened in response to the corona pandemic. Viruses are responsible for the majority of the degradation in perennial and bulbous plants such as papayas, bananas, taro, and others. Various virus-free technologies have attempted to deal with this, but the technology to eliminate viruses in natural space is unprecedented, and we are seeing the miracle of more and more virus-free plants throughout the Ryukyu Islands.

A typhoon changing its course itself is a miracle that surpasses that of plants being virus-free, and one that people may find hard to believe. However, as I have discussed in this series, the miracles brought on by the Gravitron barrier are all based on facts, and scientific verification is beginning to emerge.

As I mentioned in article No. 165 of this series regarding last year’s typhoon in 2021, the main island of Okinawa, which is located in the center of the Gravitron barrier area, was almost completely unaffected by the typhoon, and although the region was in a strong wind zone again this year, the typhoon did not cause any notable damage.

Typhoon No. 5, the first typhoon to approach the island this year, changed its course northward from Daito Island, where the Gravitron barrier is located, and passed east of Amami Oshima Island along the barrier line.

Typhoon No. 11, which struck the Ogasawara Islands in early September, was the strongest typhoon ever recorded in the summer, and was forecast to move straight westward while intensifying, hitting Daito Island and the main island of Okinawa.

After that, Typhoon No.12 moved slightly south of Typhoon No. 11, that is, outside the barrier line. In this case as well, the eye of the typhoon disappeared once and then reappeared at some distance from the Gravitron barrier line, a trend that appears to be getting stronger over the years.

To summarize the information so far, the fact is that when typhoons cross over the boundary line, they are rectified, shock waves are reduced, and wind speeds on the east side, where typhoons are generally more intense, decrease. At the same time, they are dispersed in a tornado-shaped manner, so that damage is limited to a smaller portion of the area, making the damage considerably less than originally forecast.

Overall, the damage to aging trees and facilities is noticeable, but as a result, the level of damage is much lower than reported.

Typhoon No. 14 followed a similar track to that of Typhoon No. 5. It might seem I’m trying to turn the argument in my favor, but this typhoon also followed nearly the same track as typhoon No.10 in 2020.
The Japan Meteorological Observatory was also planning to issue a special warning regarding Typhoon No. 10 in 2020, but the sudden weakening of the wind led them to change it to a general warning. This year’s storm conditions were similar to those of the 2020 typhoon, with partial tornado-like damage in parts and more rainfall damage than wind damage.
I mentioned the similarities between Typhoon No. 10 in 2020 and Typhoon No. 14 this time, and both typhoons had a fairly large and clearly formed eye at first, but they were rectified by contacting the Gravitron barrier in the Ryukyu Islands. This is quite obvious when you compare them to past typhoons that did not contact the Gravitron barrier in Okinawa and went on to strike the Kanto (Chiba) and Kansai (Osaka) regions directly, causing extensive damage there. Information from the meteorological observatory regarding this sudden change is limited, and we will await future observations. Below I will also introduce changes observed in bird behavior after the typhoon.


Information on birds in Okinawa

Numerous wild birds after the typhoon,
Evacuating to Tarama?

On the morning of September 5th, several flocks of wild birds were observed in Tarama Village after Typhoon No. 11, a large and very powerful typhoon, had passed over. Kunio Haneji, 74, a farmer, went around the island and took pictures. Mr. Haneji, a bird lover, was surprised, commenting how he’d “never seen so many wild birds before.”

Flocks of small egrets, medium-sized egrets, cattle egrets, black stilts, and wagtails were observed standing in groups in the windbreak forests and sugarcane fields that surround the village, as if taking shelter from the wind and rain.

On the 5th, many migratory birds were observed in Taira, which is one of the few remaining paddy fields in Nago City.  On this day, Typhoon No. 11 caused strong wind and heavy rains, and the birds were seen picking food among the rice plants in the second-season crop. Many varieties of herons were observed including cattle egrets, medium-sized egrets, small egrets and Gray herons. Stilts, snipe and skylark snipes were also seen. Large flocks of more than 100 sparrows were also observed, as well as robins, wagtails, and swallows. Many of them formed flocks of various sizes, staying low as if to avoid the strong winds. When cars and people on the farm road passed nearby, they occasionally fluttered up at once in the sky, creating what looked like a waterfowl paradise. Among them, the number of black-bellied terns was particularly impressive. Mr. Yutaka Toguchi, a wildlife protection officer in the Yagaji district, said, “We often see flocks of about 10 to 20 migratory black-bellied terns, but today we counted 63. It is a rare opportunity to see so many all together. The typhoon may have changed their flight path.” They are said to fly from the Far East to Indonesia to winter there, and they disappeared the next day.

The black-bellied terns that fly to Okinawa arrive from the continent on their autumn migration when the roseate terns and black throated terns on the coast return to the south. They feed on insects and aquatic organisms, mainly in rice paddies and wetlands in inland areas, and their summer plumage includes a black head and a black or speckled pattern on the abdomen. In the observations on the 5th, only a few birds had this summer plumage, the majority of them being juvenile birds or flocks in the process of changing to winter plumage. (Reported by Jinmei Shimabukuro) 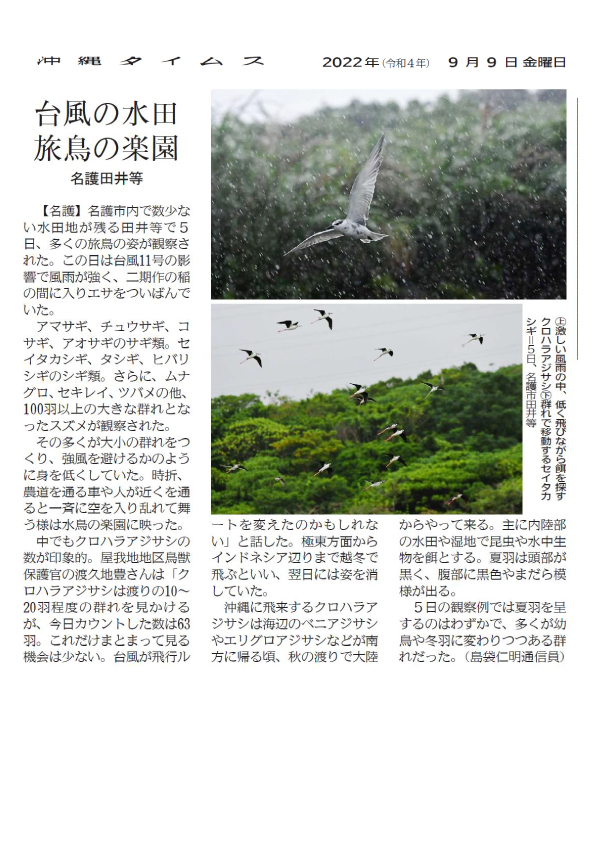 Flocks of herons searching for food in the fields
Kin

On September 12, a total of about 30 migratory herons, including little egrets, medium egrets and cattle egrets, and others, were observed in the rice paddies and fields near the Yaka Community Center in Kin-cho Yaka.

Little egrets were searching for food in the rice paddies, while the cattle egrets were resting on the ridges between fields and the medium egrets were busily hunting for grasshoppers and frogs in the fields.
(Reported by Manabu Tamaki)

A total of about 30 little egrets, medium egrets and cattle egrets flew in, on the 12th, in Kin-cho, Yaka.