#99: A New Phase of Limit Breakthrough through EM

The application of EM to eliminate radioactivity has entered the stage of practical use, and we have had steady results in Fukushima. Against this backdrop, atomic conversion by EM has led to a positive technology using salty fertilizer, mainly using seawater, and this technology has begun to spread. The results reveal an ultra limit breakthrough phenomenon that overturns the common sense of the past, and the report this time from Thailand also shows new aspects of limit breakthrough through EM. General Picheto mentioned in the report has overall responsibility for the EM project of the Royal Thai Army, is a national hero is Thailand, and has also appeared in the documentary film, “Sosei-Revival”.

The following is a report from Mr. Koshoji of EMRO Asia.

The other day, I met General Picheto. Currently, the General, now retired, has been manufacturing and selling EM compost (Bokashi fertilizer). I am reporting the following at his request to Professor Higa about his recent activities.

This year, unusually the rainy season has not yet come and we are facing a long shortage of water. Farmers in this region plow the fields when they have a little rain during the rainy season. All the farmers who have been using the compost made by Gen. Picheto have done likewise, preparing their fields. However, after it sprinkled a little for two days, we had no rain for the next two months, until August.

However, despite the severe drought, many farmers’ rice fields are quite lush and it looks like they will be able to be harvested. I also visited one farmer, and I saw healthy looking offshoots of the rice plants. Below are the photos showing the whole story. 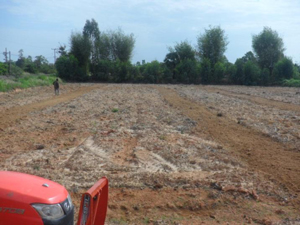 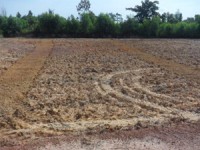 After it rains, EM compost is applied and the soil is tilled. 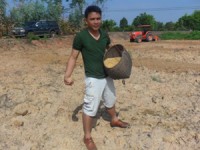 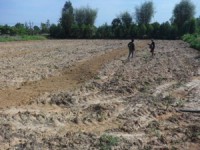 After tilling, they directly sow the seeds soaked in EM diluted solution.

The person sowing the seeds is a subordinate of Gen. Picheto and is the one who is recommending the use of EM compost to other farmers. 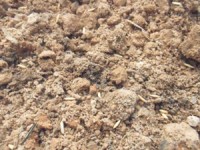 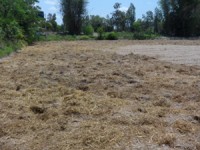 A photo of direct seeding. This person covered the soil with rice straw so that weeds will not grow. 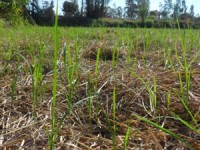 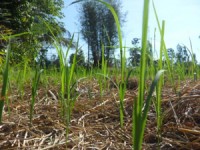 Post-germination. This is a time when there was no rain.

The following photos are of other farmers who were using EM compost. 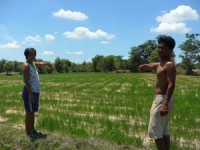 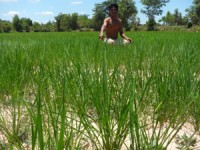 The soil is quite sandy and they had no rain, yet the rice plants all sprouted vigorously. 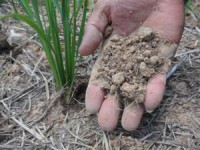 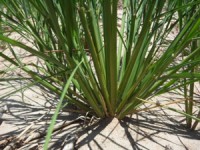 As you can see, the rice field itself is very dry and sandy. It has not rained for over two months, however the rice plants have opened in a fan shape with healthy-looking offshoots.

Below is a photo of the rice field to which chemical fertilizer has been applied. The tips of the rice plants have withered and there are no prospects for harvesting. The growth of the plants has stopped. 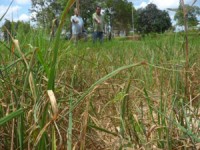 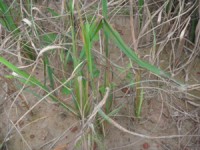 This photo also shows a plot where chemical fertilizer has been used. Root growth is poor and the plants look likely to die. 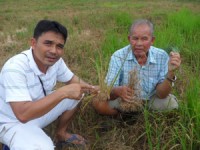 On the other hand, here are the rice plants of a farmer who used EM. This person is the head of the local town. He is very surprised how well they are growing in spite of the absence of water. 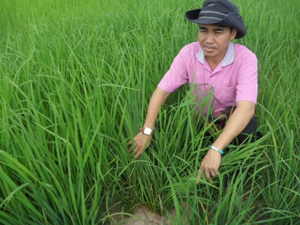 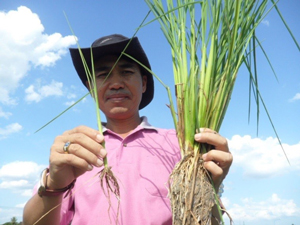 Plants planted at the same time.

The one in his right hand was grown with chemical fertilizer. It has not grown well because of lack of water. The one in his left hand is a rice plant grown using EM compost. It grew with many offshoots full of healthy white roots. 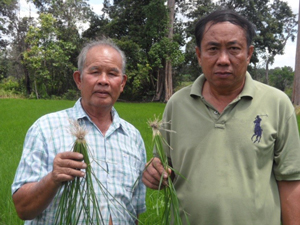 The man on the right has retired from working under former General Picheto. He used EM compost this year and the rice plants in his rice field are also growing well. 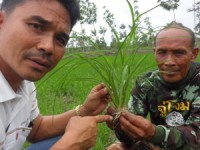 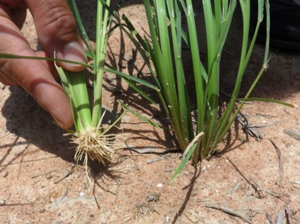 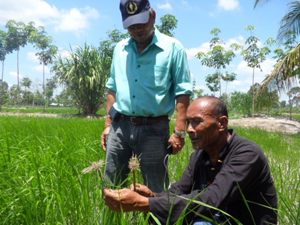 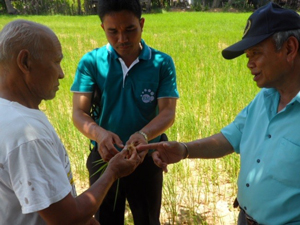 Finally, this is the photo of a farmer you visited last August 10th. The rice plants have grown very well and there are 30-35 offshoots. The farmer says he was worried what will happen because of the lack of rain during the rainy season this year, however he is not worried at all now. 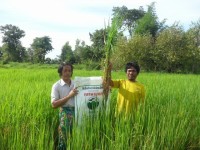 In my books and in the Funai Media articles, I introduced cases in which wheat and grass were seeded when there was rainfall, then went through subsequent severe drought, yet grew well.

I wondered why they grew so well without any rain and no water. When I observed the fields carefully in the early morning  I saw they were filled with morning dew just like it had rained.

It is clear that the fields to which EM was applied captured a large amount of moisture from the air. If we take advantage of this phenomenon we can see a vision of vast deserts becoming productive farmland.