#58: The Royal Kingdom of Thailand, in which EM Functions as a Set Government Policy

In last month’s essay I introduced how EM was used as part of government policy in Thailand to deal with cleaning up after the unprecedented floods, and gave details from the progress reports issued by the Ministry of Defense and the Ministry of Natural Resources and Environment, and by the Royal Thai Armed Forces. These results have led to a complete acceptance of the use of EM as part of measures to deal with polluted water from flooding, and to a more widespread recognition throughout the world of the power of EM.

----Using EM to Make Thailand the Foremost Nation in the World----
At the end of February I received a report entitled “Summary Report on the Emergency Project to Deal with Water Pollution Problems Caused in the Flood Affected Areas in the 14 Central Provinces” issued by the Ministry of Defense and the Ministry of Natural Resources and Environment, and another report entitled “Summary of Results of the Project to Purify Water Polluted by Flood Damage” issued by the Royal Thai Army.
I would like to express my deepest respect for the magnificent results achieved, and convey my thanks to all those involved.

EM was first introduced into Thailand in October, 1986. The late Rev. Kazuo Wakugami, Head of the Sekai Kyusei Kyo Thailand Foundation, very much wanted to use EM to help spread Nature Farming and organic farming in Thailand, and he visited my place of employment at the time, the School of Agriculture of the University of the Ryukyus. Rev. Wakugami was from Okinawa, and was noted for his work in social welfare enterprises.
I am also from Okinawa, and EM was a technology first created to help in the development of agriculture in Okinawa.

As a professor of horticulture I was devoted to the development of horticulture in Okinawa. Orchids and the majority of ornamental garden plants and tropical fruits in Okinawa had been brought in from Thailand and I myself really liked Thailand and had been helped in many ways by the people of Thailand, so I very enthusiastically accepted Rev. Wakugami’s proposal. At the time, northeastern Thailand was suffering from a drought and saltwater damage, and farm villages were impoverished.

I concluded that it was possible to solve these problems if EM were used to skillfully recycle all sorts of organic matter so that farmers could become self-sufficient, and if the power of EM was used to clean up the environment and promote good health. Rev. Wakugami and I began explaining the uses of EM to people at the Ministry of Agriculture, and then to leaders involved in agriculture and welfare. At the Sekai Kyusei Kyo Thailand Foundation we also created a model for using EM in Nature Farming.

Since then, I visited Thailand 4-5 times a year, and have done my utmost in hopes of making Thailand into an EM model nation that leads the world. I felt Thailand was a very suitable nation to become an EM model nation because of several factors: the esteemed King of Thailand and his Royal Household deeply desire their citizens’ happiness, the cooperation of many devout believers from temples and elsewhere, and the various King’s Projects, which are not limited by the usual administrative barriers. All these factors made Thailand a suitable country in which to use EM to create a model realm.

In 1988 through the efforts of Rev. Wakugami the Kyusei Nature Farming Center was established in Saraburi Province. People involved in the Royal Army King’s Project in northeastern Thailand attended the opening ceremony; since then many key people, including those from the Royal Army, have received training and helped in spreading EM throughout the northeast region.

Nearly 100,000 people have completed training at the Center, including over 5,000 people from more than 50 countries. People from over 60 countries have participated in some form of training there, not only from Thailand but from Asia, Europe, Africa, and America.

Thanks to this Center, EM has been used in King’s Projects in the northeast region and in many other areas in Thailand. Further, almost all schools in farm villages use EM in agricultural education and in solving environmental issues, and it has developed to the point where EM is the fundamental power supporting a “Self Sufficient Economy.”

The Public Housing Corporation under Mrs. Waranut has used EM in a water cleaning project to clean the water in a huge dam, to treat water in residential areas, and in sanitation measures, and these have become a model for the world. Gen. Pichate has spearheaded efforts in Sa Kaeo Province and Ubon Ratchathani Province to use EM to help poor farmers become more independent and in training farmers in southern Thailand to gain more economic independence. The successes they have had in solving numerous social problems have been highly praised by UN authorities.

In the once-in-a-century flooding that occurred last year, the Ministry of Defense, the Ministry of Natural Resources and Environment, and the Royal Thai Armed Forces all used EM and were able to resolve various sanitation problems that resulted from the flood. The world has taken note of this. Other countries should also take note how EM was used in this historic natural disaster as part of a new method of national crisis management, and I hope that these results will become known throughout the world.

Viewed from a historical perspective, this tremendous success has its origins in the desires of the King of Thailand and Rev. Wakugami’s strong convictions, which were in accord with these, and in the EM activities of the Saraburi Kyusei Nature Farming Center. The Thai people further developed these so they will become the starting point for a new kind of nation building. Rev. and Mrs. Wakugami have now gone on to their great reward, but I am sure they are very pleased with these results.

After the Great East Japan Earthquake of March 11, 2011, EM has played a large role in sanitation measures and in dealing with salt damage in the effected areas. Further, EM・X Gold has been widely used to treat internal radiation exposure. All of these activities were made possible through the efforts of EM volunteers. It will take more time before Japan adopts the use of EM as part of its official crisis management response as was done in Thailand. Not just Japan, but all the countries throughout the world where EM activities take place need to learn from the successes we see in Thailand, and the publication of this book will play a valuable role in helping them do so.

EM is a safe, easy-to-use, low-cost, high-quality product, and through its sustainable, virtuous circle approach it has the power to solve numerous issues facing mankind today: not just problems in agriculture and the environment, but also in areas such as construction, energy resources, medicine and health.

If the publication of this book helps many more Thai citizens understand about EM, master the potential of EM, and apply EM in all sorts of areas as freely as the air and the water, I am positive that Thailand will inevitably develop into the best model for the future, an ideal nation with a high degree of happiness and contentment among its people. 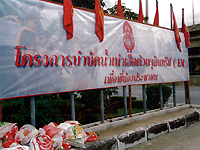 A banner at the distribution center for Activated EM at the Royal Army Club that reads “Project to Clean Water Through Use of EM.” 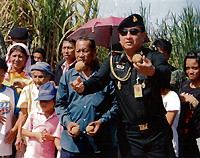 Throwing EM Mudballs into the water in the Lat Karbang district in Bangkok. 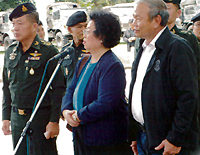 One ton of EM and EM Mudballs were distributed to the Thai Red Cross before the arrival of the flood to help deal with the flooding.

EM was distributed to the Royal Thai Army that has jurisdiction over northern Thailand.

A garbage treatment facility in Phitsanulok Province. EM being sprayed at the request of the Flood Management Committee.

Tanks of Activated EM that were distributed free of charge by the Royal Thai Army for use in treating water after the flood.

Mrs. Waranut being interviewed on TV.