From about 10 years ago, we have devised a variety of methods to employ EM to deal with these kinds of weather disasters. Our conclusion is that it is possible to deal very effectively with the free radicals caused by a variety of stress.

To do this, as mentioned in the previous issue, start by embedding EM mudballs made of EM ceramic powder, charcoal powder and Ibushisumi (smoked husk charcoal) into the soil, one for every 1-2 square meters, at a depth of 30 cm. Then if you apply 500 – 1000 liters of Activated EM per 10a every year, you will be able to effectively deal with any damage.

At the same time, once every 3-7 days, for about five times, apply a dense 1:5 dilution of Activated EM to the surface of leaves as a measure against insect pests. You can use watering cans or sprayers, and it is fine to make use of automatic spraying. At the same time, if you erect an EM barrier (protective barrier) to ward off damage from birds and wildlife, you can also prevent shock wave damage from typhoons

In the July issue of this site I gave as an example my own experimental farm, Blue Sky Palace Farm, to show the situation before and after the massive Typhoon 8. After the typhoon we were able to provide a stable supply of the remaining types of vegetables (Brazil purslane, Yunnan Baiyao, Chinese chive, mustard), and the dwarf bananas shown in the photographs were all harvested. By early September the farm had fully recovered, and at the beginning of October the area with tall banana plants was also fully restored, and I was looking forward with pleasure to a productive farm.

Typhoon 8 was the strongest and longest lasting typhoon in the last 10 years but thanks to thorough use of EM Technology the recovery that should have taken half a year was achieved in 2-3 months. Seeing this, I couldn’t help but smile to myself. The vegetables were free of pests, we were able to begin continuous cropping, so that even after harvesting, the crops did not decrease, bananas grew better than we had ever seen, the papaya I happened to plant (photo 1) had stunningly good fruit, there was a continual crop of okra and bitter gourd, and visitors were simply amazed at what they saw. 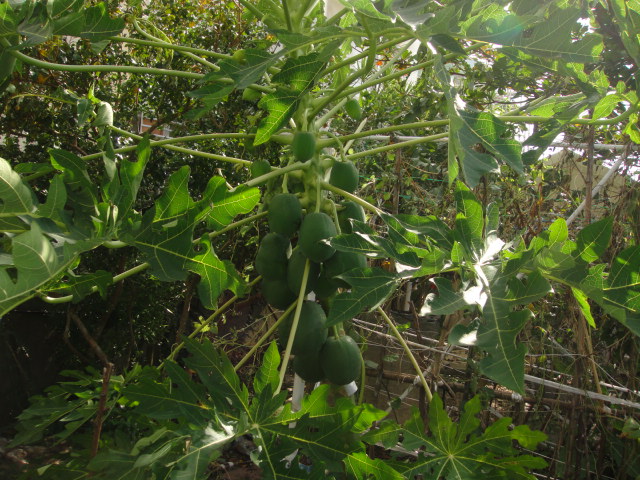 As the effects of Typhoon 19 increased starting October 10, in order to make it in time for a lecture in Kanagawa on the 12th, I arrived to the airport at 7:30am without taking any measures to deal with the typhoon. The 8am flight had already been canceled, and as our area entered the storm zone I sent an apology to the organizer of the lecture in Kanagawa and was somehow able to have them hold the lecture by having a substitute show my PowerPoint file on my behalf. Meanwhile, I carefully followed the movement of the typhoon. I think that many readers will have heard that last year, on November 13th , when we used an EM Graviton rectification box to rectify the EM Wellness Center Hotel Costa Vista and EM・X Gold manufacturing plant, the return electric current nearly rectified the exchange on the entire main island of Okinawa.

When I checked quantum entanglement with an O-ring, I found a 13km long barrier in the main island of Okinawa and observed various protective effects. In about three-four years I would like to issue my conclusions. If the sky and sea can act as a barrier of 13km, and rectifying action takes place in this space, I expect it will be possible to deal in positive ways with typhoons. I carefully observed the situation as Typhoons 8, 13 and 19 drew closer to Okinawa. What they had in common was that the typhoon shock wave was significantly reduced, and we observed the unusual phenomenon of the center of the typhoons, as they came near Okinawa, disappearing as they passed through, and then reforming afterwards.

In terms of rain and wind, Typhoon 19 exceeded Typhoon 8 and the tall banana trees in the Blue Sky Paradise Farm were flattened (photo 2). This time, just before I left for the airport, I used a high-level rectifier element to strengthen the barrier, so the short banana trees were not damaged and there was not much difference between before and after the typhoon. They are ready to harvest. Somehow I could feel the effects of strengthening the barrier (photos 3, 4, 5, 6). 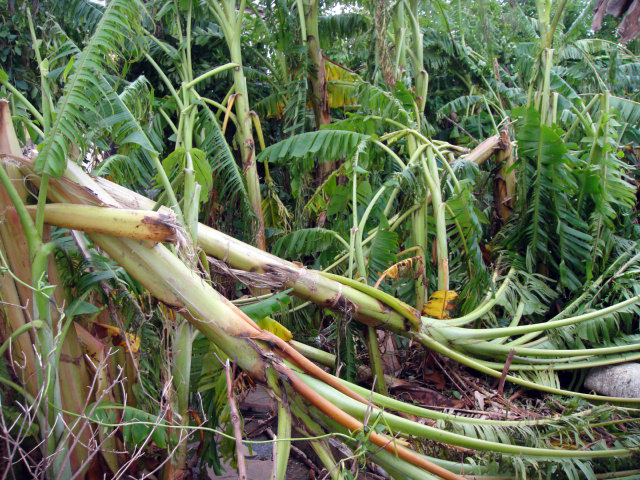 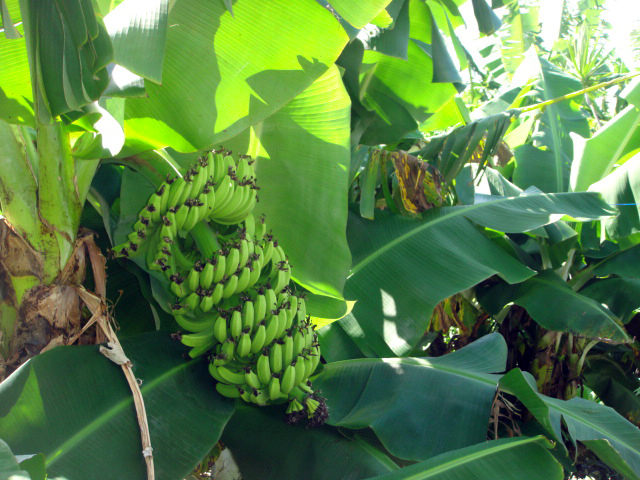 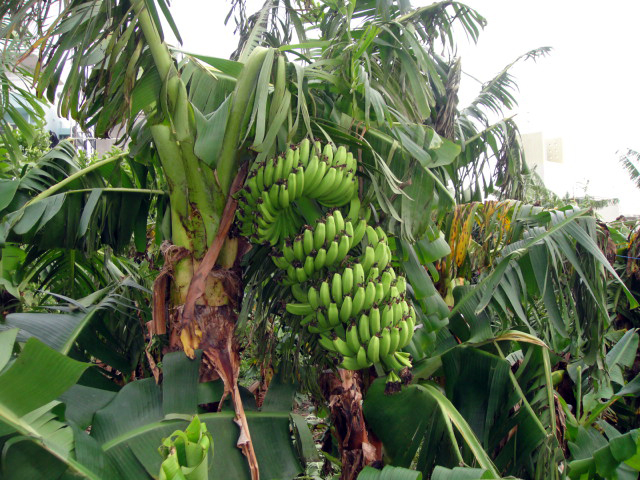 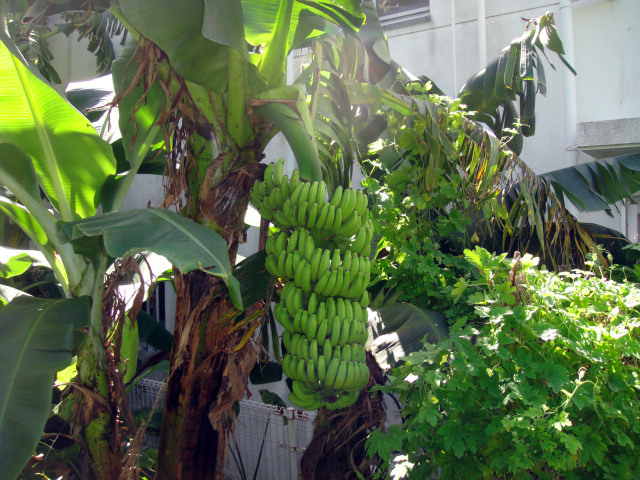 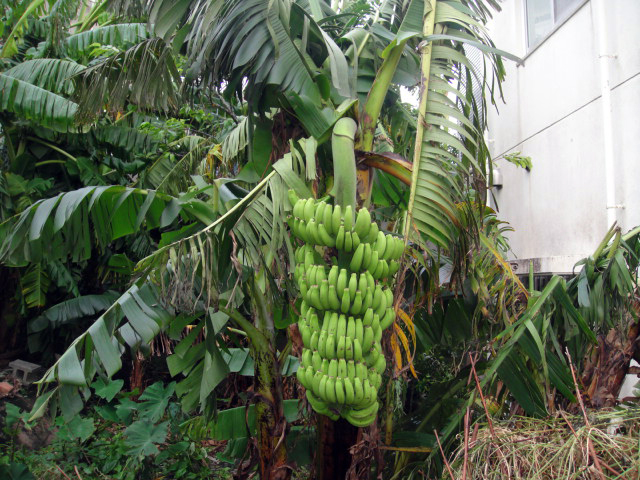 Although the Brazil purslane was also intact as shown in the photos (photos 7 and 8), because I didn't put a net over the mustard, it was damaged. Since I knew that Typhoon 19 was going to be an extremely powerful typhoon, I seeded mustard seeds around 5pm on the 10th. Photo 9 shows how they germinated three days after the typhoon. Since I did a thorough job of dealing with post-typhoon damage, I am confident that the Farm will recover very quickly. 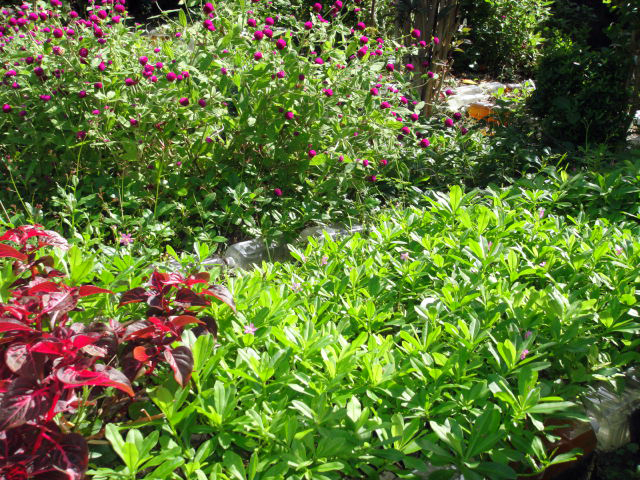 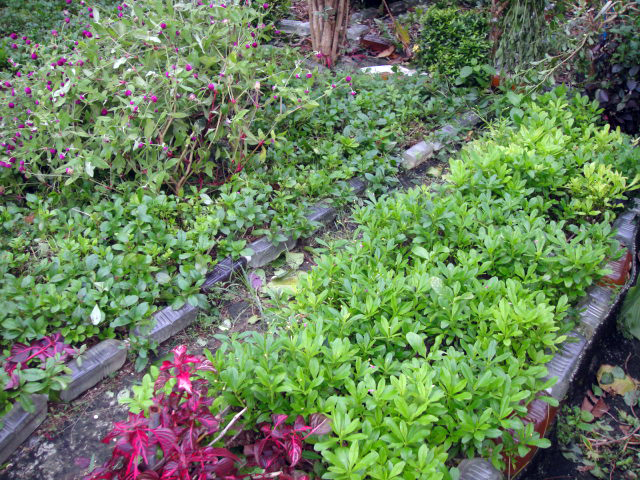 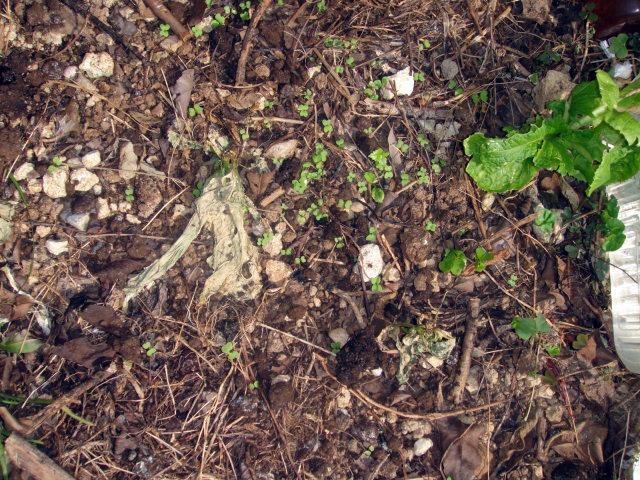