Even by the end of April the temperature still hasn’t gone up, and the price of vegetables throughout Japan has shot up. The uproar over global warming that continued until last year has quickly quieted down. More than thirty-five years ago I did a detailed investigation of weather data for the preceding thirty years. My first book, Gardening in Okinawa, was written to clarify the characteristics of weather in Okinawa and to help prepare measures to deal with cultivation there. This was before I had perfected EMTM, and was a manual on chemical fertilizer-based agriculture.

If you examine the average temperatures and amount of rainfall in Okinawa, you find that the amount of rain is slightly too much but at a level conducive to raising plants, and at first glance these seem like optimum figures. The problem is that these statistics do not reveal the actual conditions I experienced over those thirty years—the terrible droughts, the long periods of rain, the torrential rains.

Moreover, if you consider how Okinawa could get 4-5 severe typhoons per year, yet have periods of several years in a row without any at all, you see how reality doesn’t match the statistics. What is clear from this is that weather conditions also never match the statistics, and seen from this perspective, the statistical average is so unusual it could be labeled abnormal weather.

Most soil in Okinawa is made up of a coral limestone base with a layer of heavy clay-like alkaline soil, and a tertiary deposit of highly acidic, red clay, but leached layers of coral limestone, called Shimajiri Merge, are shallow and do not retain water and thus the region is often struck by drought. In addition, all the insect pests found in tropical and temperate zones are found here.

The average temperatures indicate that winter in Okinawa in warm, but for tropical plants it is too cold, and there are major fluctuations, with 1-2 months of extremely cold temperatures sometimes, and times when you can’t depend on getting enough sunlight. In these conditions, the only crops that provide a decent income beyond a certain level are sugar cane and pineapple; to raise other crops successfully, especially garden products, requires technology that deal with all the weather conditions, all the insect pests, and all the types of soil, otherwise it is impossible.

Even with all these fluctuations, once every 10-15 years in Okinawa we have a period with hardly any typhoons at all, and a decent amount of rainfall.  This period is a paradise for vegetation, with plentiful fruit, deep, vivid greenery everywhere, the island revealing endless possibilities. During this period, people with little experience in agriculture have hopes and dreams for Okinawa agriculture and accept the challenge of farming on the island.

But Nature can be merciless, and just when things are starting to go well it presents us all sorts of abnormal weather—typhoons, droughts, heavy rains, low and high temperatures. The new farmers who’ve taken up the challenge can make it through the first year or two, but by the third year have run out of capital and, going heavily into debt, see their dreams turn to nothing and disappear. Nature is spiteful, and just when people give up, it presents us with ideal weather. And then another group of newcomers arises with all their dreams and undertakes the challenge of farming in Okinawa; in three to four years they, too, disappear, having fallen into the devilish appeal of Okinawa agriculture, and history repeats itself as many fall victim to it.

My idea was that if you intensify knowledge and technology, in other words if you make agriculture a knowledge- and technology-intensive industry, these problems can be overcome, and I emphasized that with the strong winds in the Okinawan winter and cold temperatures not suitable to tropical plants, it was necessary to use greenhouses. I also proposed that as a measure against summer typhoons H section steel be used to reinforce the greenhouses; this totally reversed the accepted wisdom of leaders at the time, that Okinawa was a place of “perpetual summer,” and the Ministry of Agriculture accepted my proposal. In Okinawa, where the wind is strong and there can be a lot of rain, the use of greenhouses does more than kill two birds with one stone; it has also become the key for the steady cultivation of garden products.

From the beginning I was confident that the technology to promote agriculture in Okinawa, which operates under so many handicaps, could be applied anywhere in the world, and agricultural leaders in Southeast Asia and the Middle East began to attempt it; unfortunately, though, the technology steadily grew apart from Nature, and I myself ended up suffering from chronic agrochemical poisoning.

After all sorts of fortunate experiences, in 1980 I finally discovered EMTM, and began actually applying it in 1982. At present, now that EM TechnologyTM makes skillful use of Nature’s power, it is possible for there to be a truly innovative, technology-intensive agriculture in Okinawa.

1. Countermeasures against cold temperatures (cold-weather damage)
A little known fact is that as the density of EM-1® in the soil increases, the temperature of the soil in the early morning, when it’s the coldest, is raised 2-4 degrees C. In fields in cold regions where EMTM has been constantly used, places such as Tohoku and Hokkaido, we have seen numerous instances of snow melting about a month or more earlier, and frost forming a month later than usual. Last year the summer in Hokkaido was extremely cool, with insufficient sunlight, and they suffered the worst cold summer damage in sixty years. Most of the farmers in Shinshinotsu village, however, who have faithfully been using EMTM, had crops that were the same, or better, than in an average year. In Mikasa City, too, where an EMTM Model Town project is underway, they had similar results.

If you apply 20-30 per cent more EMTM Bokashi than usual, and at the same time use 300-500 liters of Activated EM-1® per 10 are, and EMTM-7 foliar spray, this will greatly prevent frost; at the same time photosynthesis will increase, and through increased antioxidant power it is possible to completely prevent damage caused by low temperatures. Foliar spray has been unexpectedly effective, and spraying a mixture (a 500 dilution of Activated EM-1®, a 5,000-10,000 dilution of EMTM-7, and a 5000 dilution of EMTM Super Cera C [EMTM ceramics powder]) 1-2 times per week has been shown to be particularly effective.

2. Countermeasures against summer heat
As the density of EM-1® in the soil increases, the temperature of the soil in the time when it’s highest, from afternoon to evening, is lowered by 2-3 degrees C, so the use of EMTM is itself an almost complete countermeasure against heat. If foliar spray is also done, as described above, not only will photosynthesis be promoted, but antioxidation will also be strengthened. As a result, the amount and quality of crops will improve, and simultaneously this will act as a deterrent to pest damage, so it is important to always stay alert to what is occurring.

3. Countermeasures against torrential rains and typhoons
Even if all possible precautions are taken, such as making sure of drainage and putting in tree lines as wind breaks, some damage is unavoidable. Because fruit trees in particular are mainly in exposed, open fields, make sure to use plenty of Activated EM-1® to increase the density of EMTM in the soil. Two-three times a year, be sure to apply a coating of EMTM Super Cera C to where the trunk touches the soil, and in addition do foliar spraying 1-2 days before, and after, a typhoon or heavy rain (within 12-24 hours after any damage); this will bring about dramatic results. In cases of extensive damage, adding a 5000 dilution of EM・X Gold® will make the spraying even more effective.

For vegetables and fruits that have been waterlogged—tomatoes, cucumbers, eggplants, and melons--if you do foliar spraying and inject enough EMTM into the rhizosphere, you can expect a miraculous recovery.

4. Preventing lodging in rice planting
If you use EMTM thoroughly when cultivating rice there will be great results, but you should also, from the heading stage to the ripening stage, do foliar spraying twice, as explained above, with a stronger concentration of EMTM Super Cera C, a 2000 dilution. Your harvest will increase 5-10% and quality will go up 1-2 rankings, so this is indispensible in rice planting.

5. Measures to strengthen greenhouses and farming facilities
The foliar spraying already discussed should also be done to the metal frame of the greenhouse and the plastic covering, and to other facilities. Mix EMTM Super Cera C into the paint and paint the foundation, and if you wash the entire facility several times a year with Activated EM-1®, the greenhouse will stand up to quite strong typhoons, and the plants inside will grow strong and healthy. This is an added effect of the 3D wave energy in EMTM.

The above is a simple discussion of measures to deal with damage caused by abnormal weather, but all the cases follow the same pattern. The reason is that the physiological causes of damage during calamities—whether from high or low temperatures, water damage or typhoons, or damage from excess salt—are all the same: the triggering of powerful active oxygen. The antioxidant power of EMTM has the strength to erase active oxygen, which leads to such dramatic effects. If effects aren't seen, that just means that insufficient EMTM is being used. 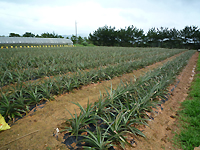 A pineapple field in Okinawa 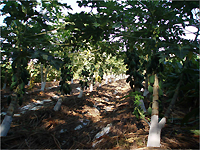 A papaya field in Okinawa 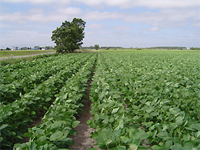 A soybean field in Shinshinotsu Village in Hokkaido 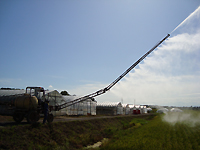 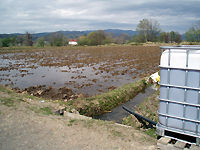 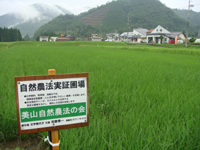 Raising komatsuna in a greenhouse in Okinawa. The effects of EMTM make the greenhouse itself always look like new, and much stronger