#77: The Use of EM in School Education in Bhutan

EM was introduced in Bhutan in 1990, and though specialists sent from foreign countries (starting with the EU and including from Japan) were opposed to the use of EM, experimental results in the field showed greater success than expected and the Bhutanese government began actively supporting EM. Bhutan has a population of about 700,000, with little level land and limited access because of the mountainous terrain. It is widely known that Bhutan’s national policy involves building up the nation through increasing the GNH (gross national happiness).

Since the entire country of Bhutan has been designated as a world natural heritage site, they are moving away from the use of chemical fertilizers and agrochemicals towards organic agriculture. EM is being widely used to recycle food waste and to transform animal excreta into organic fertilizer, and self-sustaining gardens at schools play a major role in promoting this.

The majority of high schools in Bhutan are boarding schools, because the rugged terrain limits travel. Because of this each school has a self-sustaining garden to supply the dormitories, and are actively using EM in these gardens. Since many of the students return to farm villages after graduation, APNAN (the Asia Pacific Natural Agriculture Network) is proactively supporting these endeavors.

First, to commemorate the start of World Food Day (WFD) in 2002, we organized a contest among the high schools’ self-sustaining gardens that are using EM, awarding the Higa trophy (the Dr. Teruo Higa Prize) and a cash award, and twenty schools participated. As a result EM has spread to all the high schools, over thirty schools, and this has become a major part of Nature Farming in Bhutan.

This movement took place simultaneously with a school agricultural program event including elementary, middle and high schools, and afterwards we received support from the FAO (United Nations’ Food and Agriculture Organization), and EM has begun to steadily spread further into elementary and middle schools. Below is a report from Mr. Yujiro Sano of APNAN, who advises the project.

I participated in this year’s awards ceremony for the outstanding schools, the largest annual event in the School Agriculture Program (hereafter SAP). Approximately 190 of the 551 schools in Bhutan participate in SAP, and the school that has the most outstanding school vegetable garden among the HSS (basically equivalent to a high school in Japan), LSS (equivalent to middle schools in Japan), and elementary schools, is given the award. About 100 schools are using EM.

1. Principal’s Welcoming Remarks
2. Speech by Dr. Tashi Samdup, representative of the Council for RNR Research (hereafter CoRRB).
3. Speech by the governor of Gasa District, Dasho Sonam Jigme.
4. Display and Sale of organic farm products and processed goods from Bjishon region.
5. Entertainment by students of the Bjishon school (including a parade, dances, a debate on whether global warming is affecting agriculture, a quiz of farmers, a play, and other events.)
6. SAP Awards Presentation: 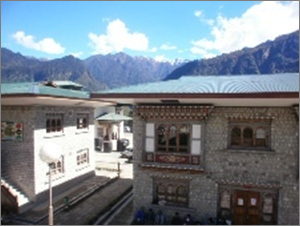 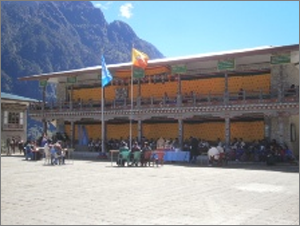 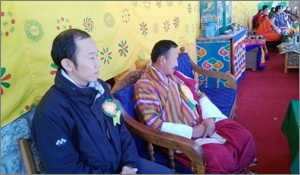 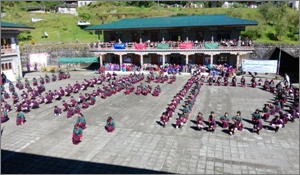 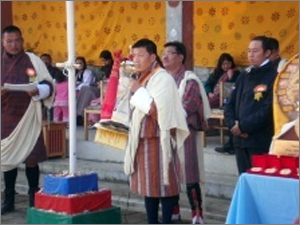 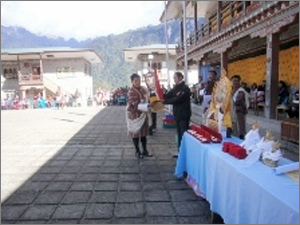 The awards ceremony for top SAP schools held at Bjishon MSS, Gasa District, on World Food Day. The photos on the top show the school buildings at Bjishon MSS. The photo in the middle (left) shows the Governor of Gasa District (on the right) and Mr. Sano (on the left); in the photo on the middle right, the entire student body spells out the letters WFD, for World Food Day. Photos on the bottom show the Higa Trophy being presented from APNAN to Udzromg LSS, and the speech given by a representative of that school, thanking APNAN for the award. 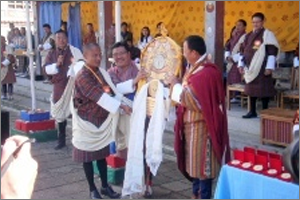 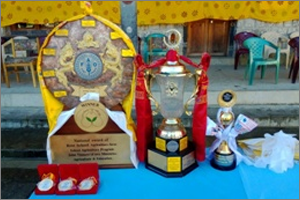 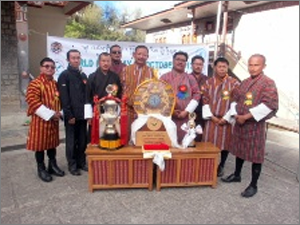 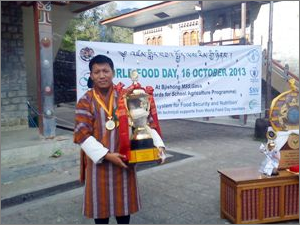 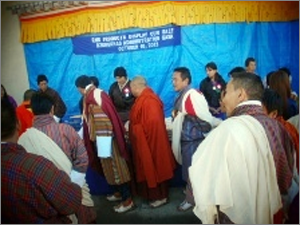 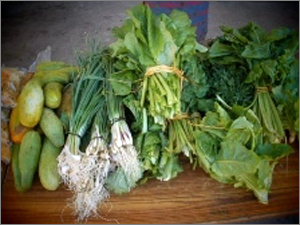 The awards ceremony for top SAP schools held at Bjishon MSS, Gasa District, on World Food Day. The photo on the top left show Tendruk HSS’s award. The photo on the top right shows the three trophies; from left to right, the HSS trophy, the LSS trophy (the Higa Trophy), and the CPS trophy. The middle row of photos shows the commemorative photo taken after the awards ceremony. The bottom row of photos shows the organic farm products from the district on sale throughout the ceremony. Various types of vegetables, mushrooms, cheese and other products were on sale. Gasa District is an organic farming district, and all the farm products of the district are organic. 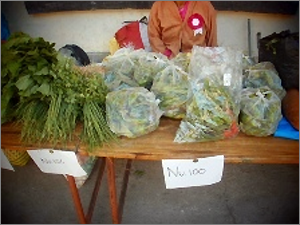 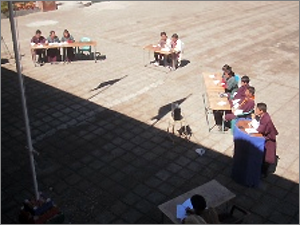 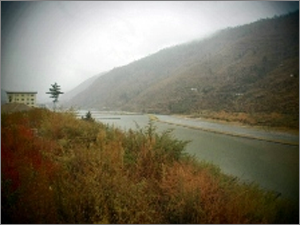 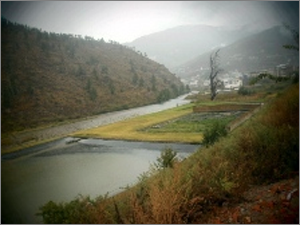 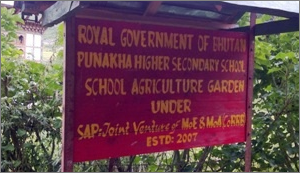 The photos on the top row, taken at the awards ceremony for top SAP schools on World Food Day, show vegetables on display (left hand photo), and on the right, the student debate on the topic “Whether or not global warming is affecting agriculture.” The middle row of photos shows the open style water treatment plant I inspected in Thimphu along the river. We are exploring a project to use EM to reduce odors, and then collect the data. The bottom row shows the farm at Punakha HSS that I inspected. Cultivation of crops there is proceeding extremely well.