In article 165, I discussed how the weather and agricultural environment in Okinawa in 2021 have become more favorable and stable. Positive effects of these changes are gradually becoming evident in natural ecosystems.

In the past few years, it has become evident that the number of birds coming to Okinawa has increased yearly and below I give some examples of these occurrences in 2021. The photos are mainly from Ishigaki Island, but a variety of migratory birds have been observed on the main island of Okinawa, as well even on Miyako Island and Daito Island.

Rare birds one after another arrive in Ishigaki Island 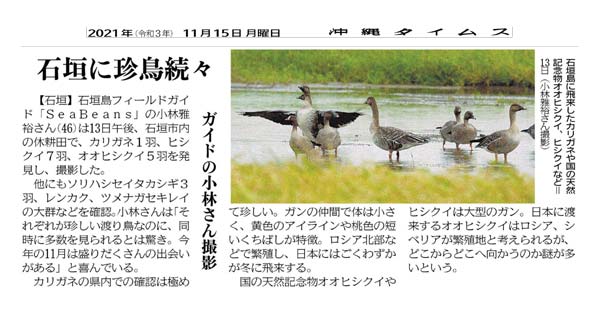 ・The lesser white-fronted goose that came to Ishigaki Island and the national natural treasure, bean goose and great bean goose, taken on the 13th. (Photo by Masahiro Kobayashi)

On the afternoon of the 13th, Mr. Masahiro Kobayashi, 46, of the Ishigaki Island field guide shop “SeaBeans,” found and photographed one lesser white-fronted goose, seven bean gooses, and five great bean gooses in a fallow rice field in Ishigaki City.

He also saw three pied avocet and a large group of pheasant-tailed jacana and yellow wagtail.
Mr. Kobayashi said, “Each of these is a rare migratory bird, and I was surprised to see so many of them at the same time. I expect many encounters in November of this year,” he said happily.

It is extremely rare to see a lesser white-fronted goose in Okinawa Prefecture. It is a small species of goose family with a yellow eyeline and a short pink beak. They breed in northern Russia and other parts of the world, and only a few fly to Japan in winter. The great bean gooses and the bean gooses, both national natural treasures, are large geese. The great bean gooses that fly to Japan is believed to breed in Russia and Siberia, but it is unclear where it comes from and where it goes thereafter.

Wild birds appear one after another in Ishigaki Island 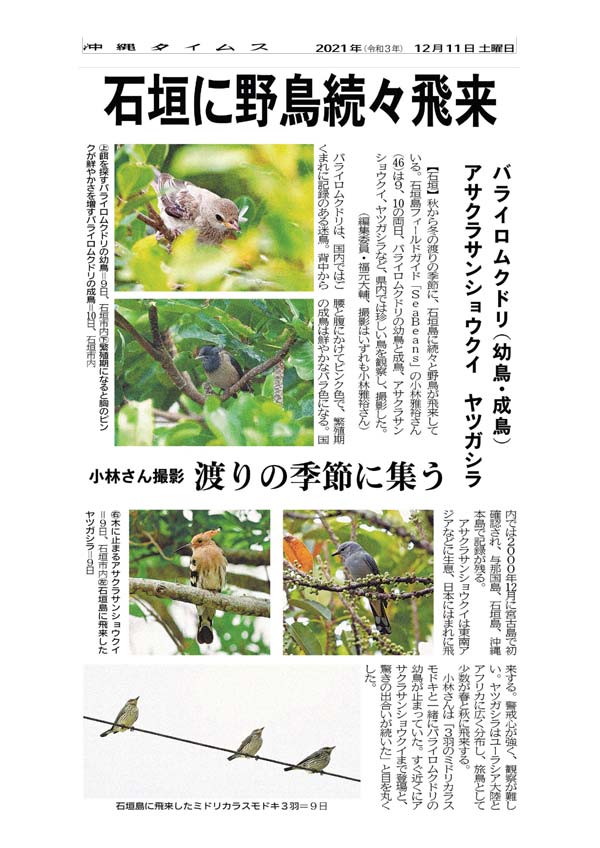 Wild birds are flying to Ishigaki Island one after another during the migration season, which runs from autumn to winter. Mr. Masahiro Kobayashi, 46, of the Ishigaki Island field guide shop “SeaBeans,” observed and photographed rare birds in the prefecture, such as young and adult Rosy starlings, black-winged cuckoos, and Eurasian hoopoes on both the 9th and 10th. (Daisuke Fukumoto, editor; all photos by Masahiro Kobayashi)

The rosy starling is a migratory bird that has been rarely sighted in Japan. It is pink from the back to the waist and belly, and adult birds turn a bright rose color during breeding season. In Japan, it was first sighted on Miyako Island in December 2000, and there are records of sightings on Yonaguni Island, Ishigaki Island, and the main island of Okinawa.

The Black-winged cuckoo is found in Southeast Asia and other parts of the world, though they rarely come to Japan. They are very cautious and difficult to observe. The Hoopoes are widely distributed in the Eurasia Continent and Africa, and a small number of them fly to Japan in spring and autumn as migratory birds. Mr. Kobayashi noted that, “A young Rosy starling was perched along with three Asian glossy starlings. There was even a Black-winged cuckoo nearby, so I had a series of surprising encounters.” 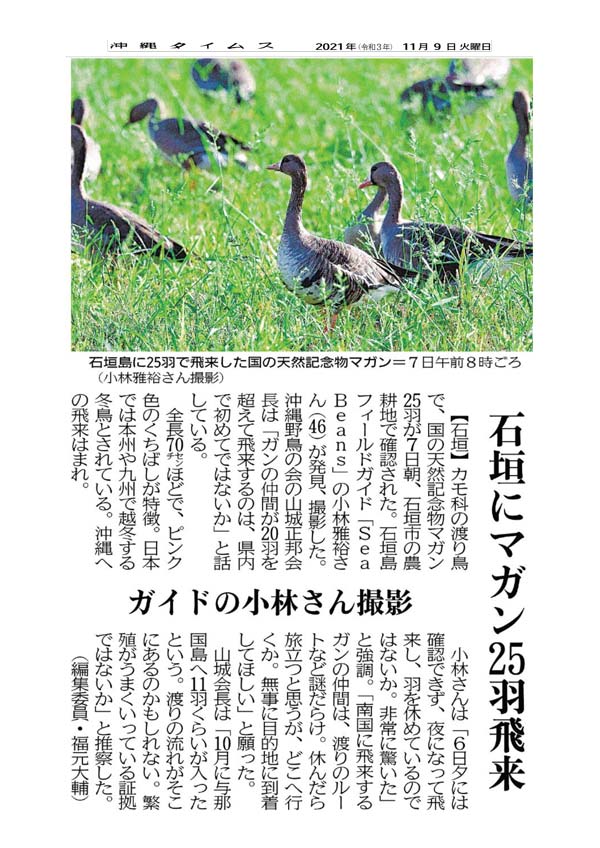 ・A flock of 25 white-fronted geese, a national natural treasure, flew into Ishigaki Island at around 8 am on July 7th. (photo by Masahiro Kobayashi)

A national natural treasure, twenty-five white-fronted geese, a migratory bird of the duck family, were sighted in farmland in Ishigaki City on the morning of the 7th. Mr. Masahiro Kobayashi, 46, of the Ishigaki Island field guide shop “SeaBeans,” found and photographed them. Mr. Masakuni Yamashiro, chairman of the Okinawa Wild Bird Society, said, “I believe this is the first time in Okinawa Prefecture that more than twenty geese have flown to the area.” The bird is about 70 centimeters in length with a distinctive pink beak. In Japan, it is considered a winter bird that spends winters in Honshu and Kyushu. It rarely appears in Okinawa.

“I couldn’t confirm this on the evening of the 6th,” Mr. Kobayashi said. “I think they flew in at night and were resting their wings. I was very surprised to see them.” He added, “There are many mysteries surrounding the migratory route of geese that fly to tropical countries. I am sure they will leave after they rest, but where will they go next? I hope that they arrive safely at their destination.” Chairman Yamashiro speculated, “I heard that about eleven geese arrived in Yonaguni Island in October. That might be part of a migratory route and may be evidence that breeding is proceeding well.” (Daisuke Fukumoto, Editor) 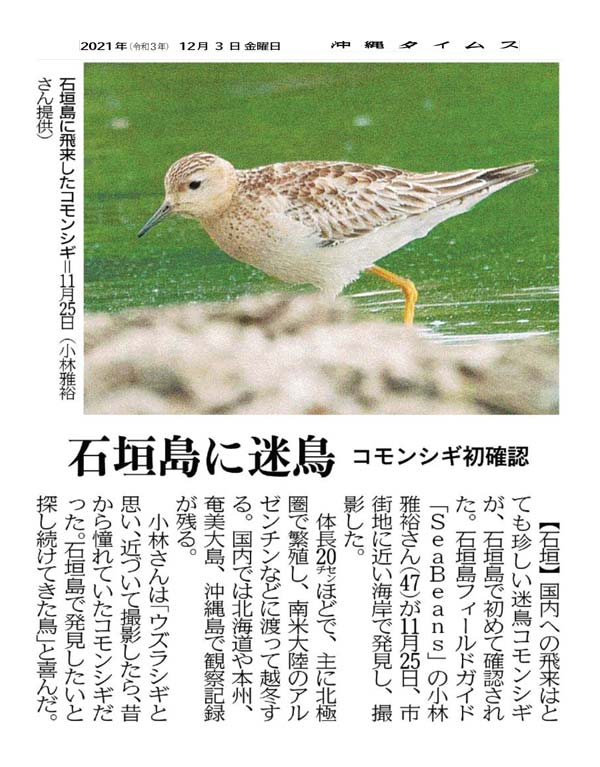 The migratory common snipe, which very rarely flies to Japan, was sighted for the first time on Ishigaki Island in Okinawa. Mr. Masahiro Kobayashi, 47, of the Ishigaki Island field guide shop “SeaBeans,” found and photographed the bird at a beach near the city center on November 25th. This variety of bird is about 20 centimeters in length and breeds mainly in the Arctic Circle before migrating to Argentina and other parts of South America for the winter. In Japan, there are recorded sightings in Hokkaido, Honshu, Amami Oshima and Okinawa Island.
“At first I thought it was a quail sandpiper,” Mr. Kobayashi said happily, “but when I got closer to photograph it, it turned out to be a common sandpiper, which I have longing to sight. It’s a bird I have been searching for, hoping to discover it on Ishigaki Island.”

The arrival of a tree pipit December 1, 2021 (Courtesy of Okinawa Times) 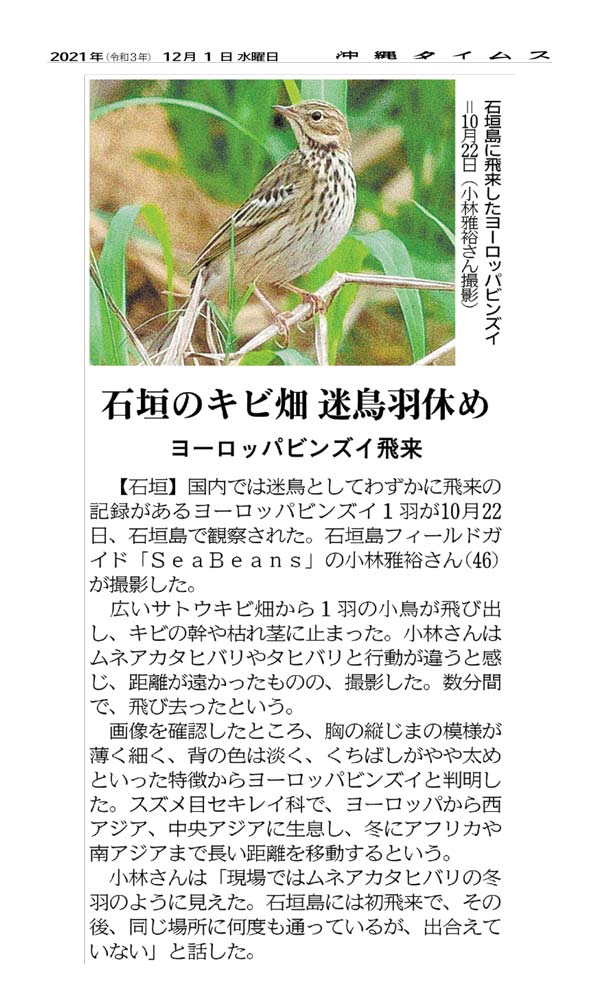 On October 22, a single migratory tree pipit, which has rarely been sighted in Japan, was observed on Ishigaki Island in Okinawa Prefecture.  Mr. Masahiro Kobayashi, 46, of the Ishigaki Island field guide shop “SeaBeans,” found and photographed the bird. A small bird flew out from a large sugar cane field and perched on the trunk and dead stalks of the millet. Mr. Kobayashi felt that its behavior was different from that of a red-throated pipit, so he photographed it even though it was far away. After a few minutes, he said, it flew away.

After checking the images, the bird was determined to be a tree pipit because it had that bird’s characteristics: a thin, pale pattern of vertical stripes on its chest, pale coloring on its back, and a slightly thicker beak. It is a member of the sparrow family (Passerine Motacillidae) and inhabits Europe, Western Asia and Central Asia, and migrates long distances to Africa and South Asia in winter. Mr. Kobayashi said, “At the site, it looked like it had the winter feathers of a Red-throated Pipit. It was the first time it flew to Ishigaki Island, and I have been to the same place many times since then, but I have not been able to find it again.” 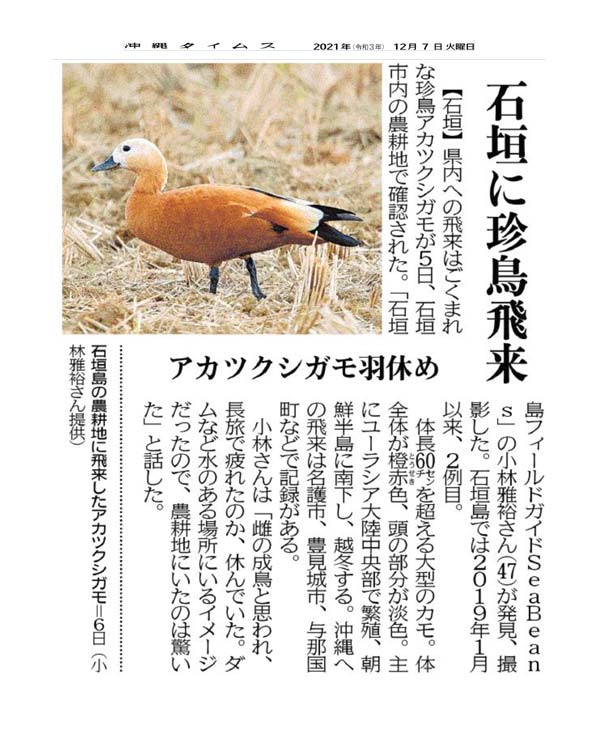 A very rare bird, the Ruddy shelduck, which rarely flies to Okinawa Prefecture, was sighted in farmland in Ishigaki City on the 5th. Mr. Masahiro Kobayashi, 47, of the Ishigaki Island field guide shop “SeaBeans,” found and photographed it. This is the second case in Ishigaki Island since January 2019. It is a large duck, over 60 centimeters long. Its entire body is orange-red, and the head is light-colored. It breeds mainly in central Eurasia. It migrates south to the Korean Peninsula and spends winters there. There are records of them flying to Okinawa in Nago City, Tomigusuku City or Yonaguni Town. Mr. Kobayashi said, “It seemed to be an adult female bird, and was resting, probably tired from its long journey. It surprised me to discover it in farmland because I had a mental image of it being in a place such as a dam.”

Two rare birds fly to Ishigaki Island one after the other

There are almost no sightings in Okinawa Prefecture
Photographed by Mr. Kobayashi October 17, 2021 (Courtesy of Okinawa Times) 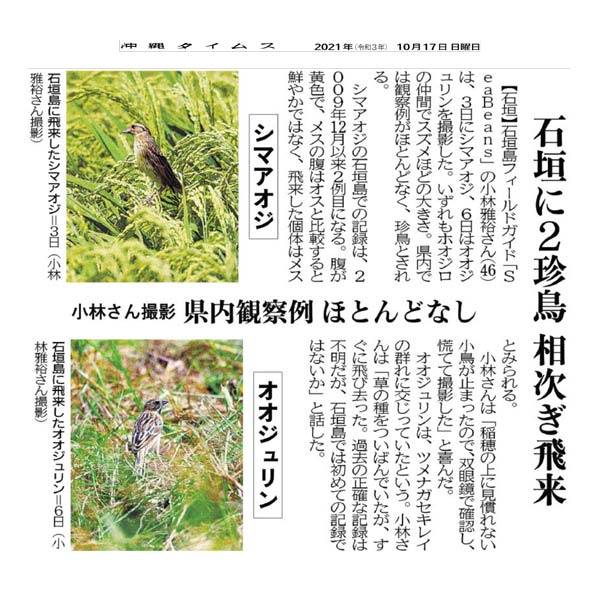 This is the second record of yellow-breasted bunting on Ishigaki Island since December 2009.
The belly of the bird is yellow, the belly of females not as bright as that of males, and it was determined that the individual bird that flew in was a female. Mr. Kobayashi was pleased, saying, “I saw an unfamiliar little bird on an ear of rice, so I checked it with binoculars and hurriedly snapped a photo.”

The reed bunting was with a flock of yellow Wagtails. “It was picking at grass seeds,” Mr. Kobayashi noted, “but flew away immediately. Records are unclear of sightings of this bird in the past, but I think this is the first-ever sighting in Ishigaki Island.” 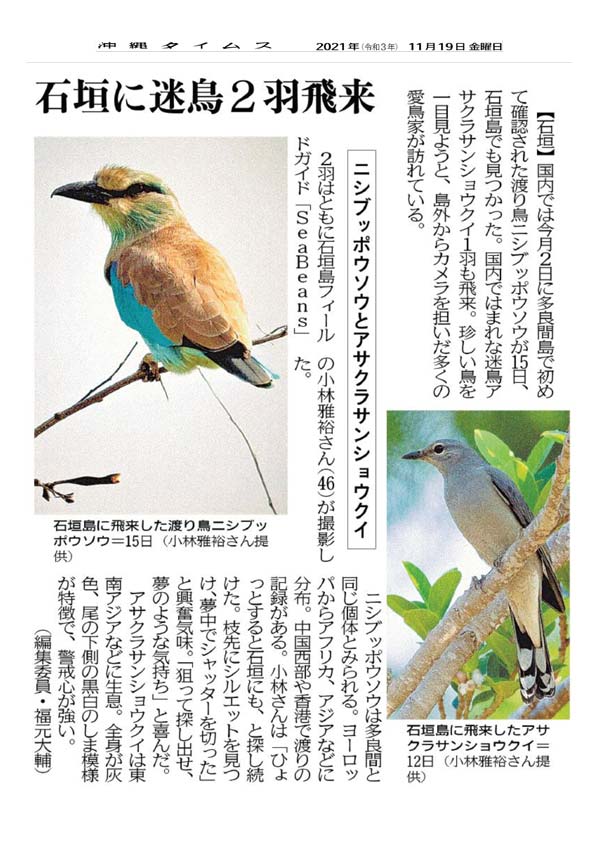 The two birds were both photographed by Mr. Masahiro Kobayashi (46) of the Ishigaki Island field guide shop “SeaBeans.” The European roller is believed to be the same bird as the one seen in Tarama Island. It is distributed from Europe to Africa and Asia, and there are records of its migration in western China and Hong Kong. Mr. Kobayashi said, excitedly, “I kept looking for them, hoping to find some in Ishigaki Island. When I spotted a silhouette on the tip of a branch and, amazed, snapped a photo, it was like a dream come true.”

Black-winged Cuckooshrike inhabit Southeast Asia and other parts of the world. It is characterized by a gray body and black-and-white striped pattern on the underside of its tail, and is known as very cautious. (Daisuke Fukumoto, editor)

・The White-naped crane searching for food, apparently the first confirmed sighting on Minamidaito Island.
・On the 22nd, in a field in Kyuto, Minami Daito Village (Photo by Kazuaki Higashi, reporter)

A White-naped crane, which seems to have arrived on Minamidaito Island for the first time, was confirmed by the 22nd. Mr. Masakuni Yamashiro (59), chairman of the Okinawa Wild Bird Society, said, “I have never heard of this bird flying to Minamidaito. It must have flown here because it was lost. There is a possibility that it will continue to winter here.”

The White-naped crane is a young bird and its gender is unknown. It was confirmed on the 14th in a field near the home of Mr. Satoshi Kochi (48), an independent business owner in Kyuto village. He seemed surprised, saying, “I’ve seen a lot of wild birds, but I’ve never seen such a large and elegant-looking bird.”

It was spotted moving in an area two kilometers in diameter around the runway of the old airport and the reservoir and on the 22nd was observed searching for food in the fields. The White-naped crane breeds in the Amur River basin, which flows through northeastern China and Russia, and winters in Kagoshima prefecture and other areas. (Kazuaki Higashi, reporter) 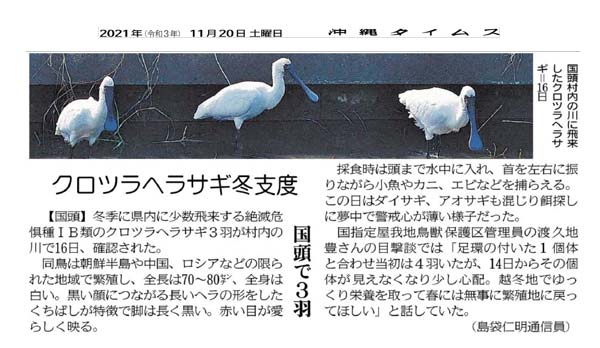 ・Black-faced Spoonbill arrives at a river in Kunigami Village on the 16th.

On the 16th, three Black-faced Spoonbills, an endangered IB species that flies to Okinawa prefecture in small numbers during the winter, were sighted in a river in the village. The birds breed in limited areas in the Korean Peninsula, China and Russia, and are 70-80 centimeters in length with a white body. They have a black face with a long spatula-shaped beak and long black legs, as well as lovely red eyes.

When they forage, they put their heads underwater and shake their heads from side to side while catching small fish, crabs, shrimp, etc. On the day of our visit, Great egrets and Grey herons were also present, all so absorbed in the search for food that they were less cautious.

According to Mr. Yutaka Toguchi, manager of the nationally designated wild bird and wildlife sanctuary, “There were four birds at first, including one with an ankle ring, but I am a little worried because I have not seen that one particular bird since the 14th. My hope is that they take their time to nourish themselves where they spend the winter and then return safely in the spring to their breeding grounds.