#78: Receiving an Honorary Doctoral Degree from Rajamangala University of Technology in Thailand

I was invited to the November 4th graduation ceremony of Rajamangala University of Technology in Thailand, where the university conferred on me an honorary doctoral degree (in sustainable energy and the environment). I have received a number of honorary doctorates and been designated as an emeritus professor in many countries, but this was an especially meaningful honor since Thailand has been active in numerous government-sponsored projects utilizing EM and has steadily been moving towards being an EM-centered nation.

I have often introduced EM activities in Thailand, not just in this site but also in my books and the DND website, but the main impetus for the conferral of the honorary doctorate this time was the use of EM in sanitary measures following the massive flooding in Thailand from October through November 2011, a scale of flood that occurs only once every thousand years. After the flooding, EMRO was also requested by the Thailand special task force to participate, and I served in an advisory capacity. Details can be found in this site and the DND site, as well as in my book A New Earth Saving Revolution.

Rajamangala University of Technology is the largest national technology university in Thailand, with many regional campuses, a mammoth university that graduates tens of thousands of students each year. The very first EM manufacturing facility was located in the Rangsit district, where the main campus is located, within walking distance of the campus. This proved to be a fortuitous coincidence.

My degree was recommended to the main campus by the board of trustees of the Ratanakosin campus and was conferred at the November 4th graduation ceremony. I was the fourth person so honored, and the first foreigner. Seeing the hall filled with the 5,000 graduating students was certainly the highlight, and I was also quite moved by the solemnity of the entire ceremony. The conferral of the degree began with a candle lighting ceremony led by Princess Sirindhorn, the King’s official representative, followed by a prayer of completion by five Buddhist priests, during which time the princess conferred on me the honorary doctoral degree. (See photo 1) 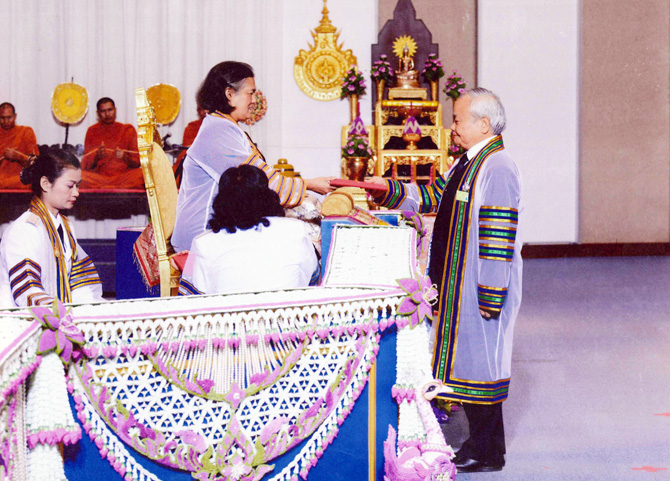 Princess Sirindhorn smiled a little at this time, possibly having been reminded by someone of the events of 24 years before. The scene was broadcast throughout the entire country, and many were surprised by the Princess’s smile. Princess Sirindhorn personally presented the degrees and diplomas to every one of the graduates, following which she read a congratulatory message from the King. The entire auditorium was greatly moved and touched by this.

This huge graduation ceremony of 5,000 students, which took some four hours (the Princess took a fifteen minute break), took place in perfect order, and was a serious, formal and very impressive ceremony. A great deal of practice and rehearsal was needed to conduct a ceremony such as this, and I myself had to rehearse my role several times. At the evening reception sponsored by the university, the head of the board of trustees said, “A long ceremony like this must have been hard on you. What did you think about it?” He was probably expecting me to reply that the ceremony should have been briefer, like the ones in Japan.

But I told him the following: “Such ceremonies must not be easy on the royal household, but I hope that this type of formal, blessed graduation ceremony will continue. Having a ceremony where the graduates pledge to be of service to society and their country gives them a greater awareness that they have become full-fledged members of society, the DNA needed to help society evolve into something even better. This is a mechanism to deploy the fundamental potential needed to develop the nation of Thailand. The prosperity of great nations is supported by that potential, and maintaining this tradition is not only part of a historical continuity, but will help the graduates grow as a source of the nation’s strength. Because of it Thailand will become, as time passes, an even better nation. Japan used to have ceremonies such as this, but nowadays regretfully it does not.” 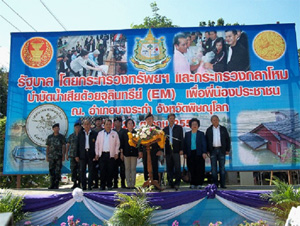 [Photo caption:] The Military, Ministry of Natural Resources, and the Ministry of Social Development and Human Society Participated in the Kick-Off Ceremony for EM Activities Directed at Flood Relief After the Massive Flood of 2011

When the head of the board of trustees and the university president heard these remarks I made, they were both surprised and moved, and felt renewed pride in their nation’s universities and the graduation ceremonies that close out the school year.

In addition to having the honorary doctorate conferred on me by Rajamangala University of Technology, I was also asked to serve as honorary chairman of the university-sponsored international conference on “Eco Construction and Eco Energy.” For this purpose I again visited Thailand in mid-December, when I provided advice and helped launch a model energy-saving enterprise that utilizes EM Technology.

On November 5th I gave a commemorative lecture at the Ratanakosin campus, which had sponsored my honorary doctorate. Many people working in EM-related areas attended, as did representatives from the National Housing Authority, Ministry of Social Development and Human Society, and the military, and it was a wonderful opportunity to renew old acquaintances.
At the Ratanakosin campus we also decided to conduct joint research in the fields of eco construction and eco energy, and to substantiate findings at actual National Housing Authority sites.

EM was first introduced to Thailand in October, 1986. EM had remarkable success, and in order to disseminate its use throughout Asia, in the fall of 1989 we held an international conference on EM and Nature Farming at Khon Kaen University in northeastern Thailand, a university that, at the time, was a sister school of the University of the Ruykyus. Along with preparing for this conference I was also invited to attend the ceremony marking the 30th year since the university’s founding.

At the ceremony, from the Royal Family Princess Sirindhorn attended as representative of the King. At the time EM had been remarkably successful as part of the King’s agriculture promotion project (the King’s Project), and in order for the Princess to have a deeper understanding of this I proposed to present her with an English-language research paper I had written on EM that was used at the world organic farming conference held in Burkina Faso in Africa. I was told just beforehand that there was no precedent for such a thing but that my wishes would be conveyed, and since no objections were then raised it was decided to proceed. That night I had to practice the presentation formalities many times. Afterwards I learned that Princess Sirindhorn had a deep understanding and appreciation for microorganisms. 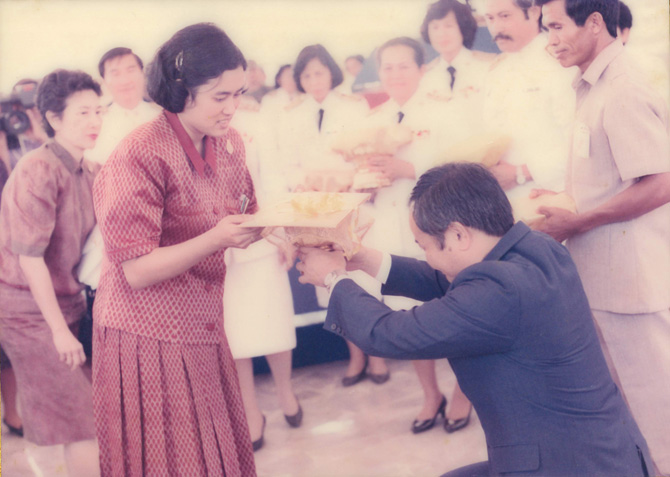 Photo 2, dated February 6, 1989, shows this presentation. At the time, northeastern Thailand was suffering from a great drought and farming villages were impoverished, and EM was starting to draw attention as a possible solution. I wanted to present the paper to the Princess because I hoped that EM Technology, which had already demonstrated proven results in the King’s Project, would contribute to solving agricultural issues in Thailand (particularly in the northeast region) as well as environmental issues, and also because of the upcoming first international conference that would held in October at Khon Kaen University.

This sort of presentation was quite exceptional, and those working on EM at Khon Kaen University celebrated the future of EM in Thailand. The international conference in October of that year was a great success, and we founded APNAN (Asia Pacific Natural Agriculture Network). Based in Bangkok, APNAN truly plays a leading role in disseminating EM throughout Asia and the Pacific. It is my hope that this recent visit will serve as the opportunity to build on the foundational use of EM Technology in agriculture and the environment to shift to its use also in the medical and health fields, engineering and construction, all kinds of industries, and energy and energy-saving fields, and that through this we can further develop an EM-based model for the future.