As already written about in this magazine and in the online journal DND (Digital New Deal), radioactive contamination cleanup measures in Fukushima Prefecture using EM are proceeding well. On June 15th I visited several sites to see for myself the good results obtained in this cleanup effort in Koriyama City, in the Emporium Kindergarten, and at Cosmo Farm, in Miyakoji Town, Tamura City, a designated controlled area 19 kilometers from the nuclear power plant, as well as Kawauchi village, where people have begun to return to their homes.

The next day, June 16, at the multi-purpose auditorium in the Fukushima Prefecture General Agriculture Center in Koriyama City, I attended the 2nd EM Technology Colloquium, where there was an exchange of information on these successes and other case studies, and in the afternoon I gave a wrap-up lecture.

In Belarus and the Ukraine, which were affected by the Chernobyl accident, use of EM reduced radioactivity by 15-35% in one year’s time. In Fukushima we have made a guideline index to increase the amount of EM applied so that results can be seen as soon as possible. The general goal is to apply 1 liter of Activated EM per square meter. If results are not seen, then applications can be repeated. Use a 10-100 dilution and apply Activated EM so that it permeates the soil everywhere; right after it has rained, it is easier and more effective to use EM・1.

EM has the power not only to reduce radiation, but also to eliminate the free radicals that are produced along with this. Low-level radiation exposure has become a problem because the free radicals constantly produced in the environment lower the immune system of the human body. Because these free radicals increase the damage done by radiation, even if the amount of radiation is within safety standards they will produce a variety of damage.

Damage done by low-level exposure does not just affect the human body; it is important to understand that it is a destructive phenomenon that leads to the oxidation collapse of all sorts of objects in the area, starting with buildings. The life span and functionality of residential buildings are reduced by half, plastic and metal products, including cars, of course, deteriorate rapidly and lose their functionality.

If you spray EM and the radiation does not decrease as you had hoped, it will still definitely eliminate free radicals and prevent deterioration of the environment, machinery, and buildings. These effects will accumulate the more times you spray, and the phenomenon of syntropy (revitalization) will be evident. In the colloquium this time there was information given about marked results, with reductions in radiation of 30-50%, but there were some people who had their doubts because the levels did not reach zero.

But if you think about it, radioactive cesium has a half-life of thirty years, which means that, following the precepts of atomic physics, it will take thirty years for the amount of radiation to be reduced by half. But thorough use of EM can, in a year, reduce the amount by over 50%, and with the methods described above, by over 30%. This in itself is almost unbelievable. On top of this, it can completely suppress the damage done by free radicals brought about by radiation, and can actively transform agricultural land, the environment, and living spaces into places in which everything becomes healthier.

This isn't a case a “turning misfortune into a blessing,” but the more one uses EM the more everything will be revitalized, without adding any new burdens to the environment. Even if one uses EM on a daily basis as freely as the air and water, in order to fully understand its significance and live a complete EM lifestyle, one must have a firm sense of a higher level of commitment. Not just in Fukushima, but in hotspots in the Kanto and Tohoku regions, and areas where there is low level radiation exposure, this is the reality people face, whether they like it or not.

For better or for worse, if this handicap leads to a shift to an advanced EM lifestyle, in which EM is always being used, spraying EM will become an enjoyable activity. These efforts will revitalize those around one, and give them the opportunity to choose and build a more enjoyable, meaningful life.

Emporium Kindergarten has implemented a system to thoroughly use EM wherever possible, and the results of this have also had an effect on the families of the children. Their system creates large amounts of EM and uses an electric motor, making it easy to spray EM whenever and wherever one wants. An EM information exchange is already active among parents and others. They are also seeing the added benefits of using EM in a group situation, including the fact that the kindergarten is always fully enrolled. The successes seen in Emporium Kindergarten have also been applied to schools and kindergartens in regions where there are radiation hotspots, and moreover this has started to spread not just to people involved in kindergartens, but to local residents as well, with volunteers systematically helping spread EM use.

Cosmo Farm in Miyakoji Town, Tamura City, is 19 kilometers from the nuclear power plant, in a designated controlled area where radiation is high. Four people have remained in this area, using EM to do full-scale cleanup of the radiation and to grow all sorts of crops. Mr. Imaizumi, the head of the farm, said he has been using EM for twenty years and that when the nuclear accident occurred he evacuated the area. Afterwards he confirmed that the amount of radiation in the compost of an EM farmer in Okuma Town, 10 kilometers from the nuclear power plant, was very low, and after he collected a variety of EM-related information he returned to his home in the controlled area.

Cosmo Farm is serious and thorough in its use of EM. It had converted a shimeji mushroom growing facility into an Activated EM production facility, where it produces thirty tons of Activated EM per week, which it sprays, using a firefighting pump, over fields, homes, and the woods and hills in the valley one hundred meters on either side of the farm. The amount of radiation has fallen under fifty percent of what it was previously, and they are confident in the results they have using EM. The challenge that Cosmo Farm has taken up will serve as a model for radiation countermeasures in broader regions.

After Cosmo Farm I visited Horimoto Farm, in Kawauchi Village where the villagers decided to return from evacuation. Much of Kawauchi Village has radiation levels below 300-400 Bq, with only limited areas over 1000 Bq. Because Mr. Horimoto has been using EM for quite some time, his rice fields measure around 200 Bq, a very low level. Mr. Horimoto produces large quantities of Activated EM, which he distributes to surrounding farmers, and they have had some good results. At the radiation levels seen in Kawauchi Village, if EM is applied along with the zeolite and potassium silicate the government recommends using, it is possible to reduce the radioactive cesium to zero. Zeolite is a good soil amendment, and since it works well EM, in a sense this is a welcome pairing.

The main problem is the financial damage caused by unfounded rumors. Regarding this, I have often introduced in this magazine the successes of Makuta Amenity in thoroughly using EM fermented compost to the point where radioactive cesium is undetectable. If their example is followed, this problem can be resolved. Mr. Horimoto is undertaking the challenge of creating an innovative model for agriculture in Kawauchi Village, based on his past experiences using EM, and on the information from Makuta Amenity he has put into practice.

At the colloquium on the 16th we heard reports on the three cases given above, as well as reports on activities by the EM and Watering Cans Association (Iwaki City), the Baba EM Research Society (Minami Soma City), and Mr. Makuta of Makuta Amenity. They detailed the successes they have had up till now, and the results of using EM fermented compost, which have been reported on in this magazine, and the background behind the public announcement in Fukushima Prefecture.

The auditorium was full for my afternoon speech, with over 200 attendees. Since this was my first public talk after Fukushima Prefecture had officially acknowledged that EM is capable of absorbing and suppressing radioactive cesium, the talk was reported in a positive way by local newspapers and television.

In order that more and more people in Fukushima will learn about the increasing number of EM-related activities, the FM Fukushima radio station will broadcast a program, entitled “Beautiful Fukushima, EM Paradise” in the afternoon once a week. I expect that this will be a further impetus to EM activities in Fukushima. 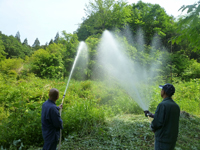 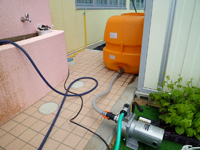 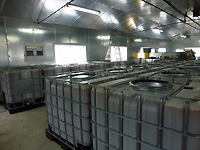 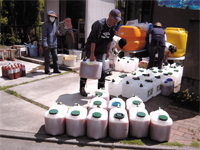 Members of the EM and Watering Cans Association Distribute Activated EM Every Saturday. 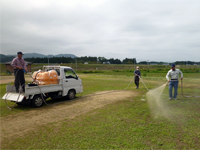