The cost of the collapse of subprime lending that the U.S. has experienced for the first time has now far exceeded original estimates, but from a global perspective it is the beginning of the most revolutionary opportunity in human history for an era in which war in no longer necessary. A social trend is now beginning to put the brakes on runaway capitalism and to reevaluate socialism. In other words, we have reached the point where there must be a paradigm shift from the antagonism and competition that we have dragged along with us, to a paradigm based on coexistence. We are at the stage where we need to be flexible about approaches so that together we can solve the present social unease.

We have seen this flexible approach within Japan leading to all sorts of emergency measures to aid the unemployed and to restructure the workplace, with excellent results that could not have been attained with existing ways of thinking. In short, we see a burgeoning consciousness of human rights that focuses on human dignity and happiness, and the idea that it is entirely logical to employ methods that rely neither on capitalism or socialism but ones that are adapted to best address each particular situation.

This transformation has spread to both the global economy and international relations, with countries finding they must change direction and abandon the selfish approach that puts their own country first and ignores other nations and international society, or else their countries will become bankrupt. We see the U.S. and the EU working together to escape the financial crisis, and we’ve reached a point, unprecedented in human history, where people are willing to try any and all approaches.

In order to further strengthen this trend, it is necessary for the principle of self responsibility to function in an organic way, so that the individual strives to improve society, society protects the individual and improves the country, and the country protects society and changes global society for the better.

Since the beginning of the New Year I have had these issues in mind as I’ve written this series. Up until now I have mainly been dealing with the methods and philosophy of applying EM in order for individuals to fulfill the principle of responsibility towards society. With the exception of Tokyo, where there is a structural concentration of finance, the majority of other municipalities in Japan have begun to restructure as sustainable financial entities.

I have long been explaining how if public administrative units and citizens systemically incorporate the use of EM into their daily lives, it is possible for them to cut public administrative costs in half, and I have been assisting in all sorts of practical applications. In the beginning, local governments and the national government didn’t want to have anything to do with EM, but now they have recognized its effectiveness. However, in order to fully demonstrate the power of EM and lower administrative costs by half, we must remember that it is of paramount importance that EM not be used just as a substitute for existing methods, but to transform administrative methods.

The village formerly known as Miyazaki Village in Fukui Prefecture, with a population of some 6,000, had a village debt of around 9 billion yen, and its per capita medical expenses were far and away the highest in all of Fukui Prefecture. The village’s finances were on the verge of collapse and they had to obtain a special guarantee from banks to pay village employees and tide them over during their financial crisis.

They were in exactly the same situation as larger restructured financial entities, but at the time the national and prefectural governments still had financial reserves so they were somehow able to manage. This was in 1995. Eight years later, Miyazaki Village had the lowest medical costs in the prefecture, its village debt was almost zero, its population had increased, farming was revitalized, academic achievement at elementary and middle schools, and school sports (mainly volleyball), were at the highest levels in Fukui Prefecture. People called Miyazaki Village a miracle, and Village Chief Mr. Kimura, who had led the village from being the worst in Japan to the nation’s best, was invited to the annual garden party hosted by the Emperor.

These achievements continue today after the village has merged and is now called Echizen Town. It will take a while for these achievements to be found throughout the town, however the achievements of the former Miyazaki Village have become a great example for other local governments that are facing financial crises, so even if this is somewhat old news, I'd like to reintroduce what happened in Miyazaki Village.

It all began with the aging water treatment facility (waste treatment facility) in Miyazaki Village. The center of the village was filled with a terrible odor, and more and more villagers complained about losing their appetite. The village asked professionals to estimate the cost of repairs and this came to over one hundred million yen, which they couldn’t afford. At the time the village wasn’t even able to raise 50,000 yen, so instead they sought the advice of people who were using EM, came up with their own solutions, established a method of cultivating large quantities of EM, and they continued to use EM by the book until the odor disappeared.

In about a week complaints about foul odors dropped off, and the villagers and the village office totally reevaluated EM. Originally many people in Miyazaki Village had been using EM with great success to recycle kitchen food waste, and for home gardens, and there were groups that were using EM in Nature Farming, and they were all a great help to Mr. Kimura as he revitalized the village using EM. After resolving the issue of the waste water treatment, the village office formed an EM outreach project team, which successfully disseminated the use of EM in a wide variety of areas: organic waste recycling, using sewage to make organic fertilizer, utilizing EM-grown vegetables in school lunches, obtaining JAS organic certification, applying EM-fermented rinsed rice water in homes, using EM in animal husbandry, using EM to clean school swimming pools, restrooms, and classrooms, and also in pottery and in secondary industries.

Naturally, costs to treat organic waste and sewage went down markedly, they were able to have reserves of several tens of millions of yen per year, and could provide subsidies, so they were now able to envision the projects that were truly necessary for the village. Before they knew it, the medical costs they had been covering were drastically reduced, and the village now had the lowest per capita medical costs in all of Fukui Prefecture.

Not only that, direct sales of EM-grown agricultural products, though only sold on the weekends, reached ten million yen per month; most of these were grown in home gardens and small-scale farms run by part-time farmers. Ten million yen per month is an extremely great blessing in a farming village like this with an aging population. The costs for these operations are so low because they use food waste and other low-cost resources, so the ten million yen is almost all pure profit.

Since the majority of households are utilizing EM-fermented rinsed rice water, it’s not necessary now to apply EM at the waste treatment facility because the purifying function went up. Sludge is utilized as a high quality organic fertilizer, the discharge water is a kind of magic water that is being widely used in farming and to care for trees along streets, and furthermore it helps to purify rivers and streams downstream from the village.

Wherever I went I stressed that all of Japan should follow the example of Miyazaki Village, but at the time not only the national government but also the prefecture, and local governments were indifferent to EM and had no problem about opposing EM.

In the present day, the situation has totally changed. The Organic Farming Promotion Act has been established, and at organic farming conferences that focus on EM, section heads in the national government have become regular attendees. The government, both at the national and local levels, has changed its mind completely about EM, and its former opposition is a thing of the past. “Got a problem? Then turn to EM.” The national and local governments are in a difficult situation right now, and have finally accepted EM. EM’s time has truly arrived. 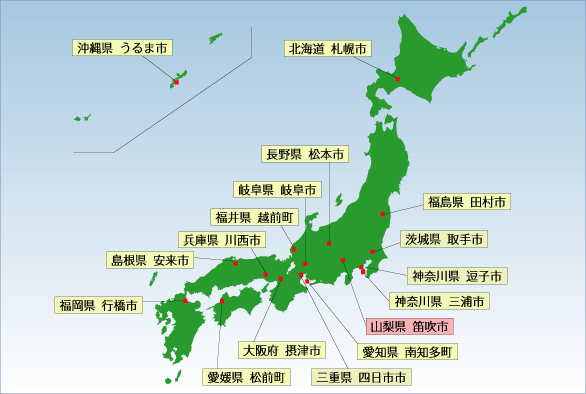 In Echizen Town Miyazaki (formerly Miyazaki Village) in Fukui Prefecture, EM Technology is being implemented in the public waste treatment facility to combat odors (top). EM Activated liquid in PET bottles is being distributed free of charge to all homes (center). Mr. Kamisaka, Head of the Division of Environmental Health explaining the way to apply EM, using a chart that explains the flow of polluted water in the waste treatment facility (bottom).

After merging with Echizen Town, the local administration and residents are cooperating in numerous projects.

At the Nature Farming Technology Conference held last August (sponsored by INFRC, the International Nature Farming Research Center), Mr. Akira Mochizuki, assistant director of the Agriculture Protection Section of the Production Development Division of the Ministry of Agriculture, was a panelist.