#83: The Energy Rectification Force of EM

In explanations of the application of EM in the field of energy conservation, and in recent issues of Kenko Seikatsu Sengen (Taking a Stand for a Healthy Life) magazine, there have been an increase in descriptions of EM’s energy rectification power, and an increased number of questions about it as well. Here I would like to provide information about this rectification force.

Rectification is a technical term about electricity, and in the narrow sense it means converting alternating current to direct current, but in a broad sense, it means an adjustment to smooth the flow of electrons. Atoms, the basic unit of matter, have a central nucleus that contains both positively charged and negatively charged electrons.

When such atoms are stimulated to produce magnetism or electricity, an originally stable state of electrons round the atom now moves freely; in other words they become free electrons and transmit electrons. When these free electrons increase, this becomes an electrical current, and becomes electrical power that can be used in all fields.

In order to make this more efficient, many kinds of power semi-conductors have been developed (transistors, diodes, semiconductors, thyristors, and carbon micro-coils), in other words technology to efficiently rectify electrons, which have achieved significant results in energy saving and increased functionality.

In principle, the energy metabolism of organisms is also done by the exchange of energy of free electrons, and can safely be considered as operating under exactly the same principle as electronics; its performance is far more efficient than power semiconductors.

The energy efficiency of plant photosynthesis (to the end product), and the efficiency in the human body moving at 1,500 to 2,000 kcal energy per day are, when you consider the level of present day power semiconductors, at an almost miraculously high level of efficiency. Thinking of it the other way round, it is the result of the rectification force of enzymes, hormones and coenzymes involved in metabolism, and the level of rectification power is directly linked to the level of health and production.

Considering the Essence of Limit Breakthroughs 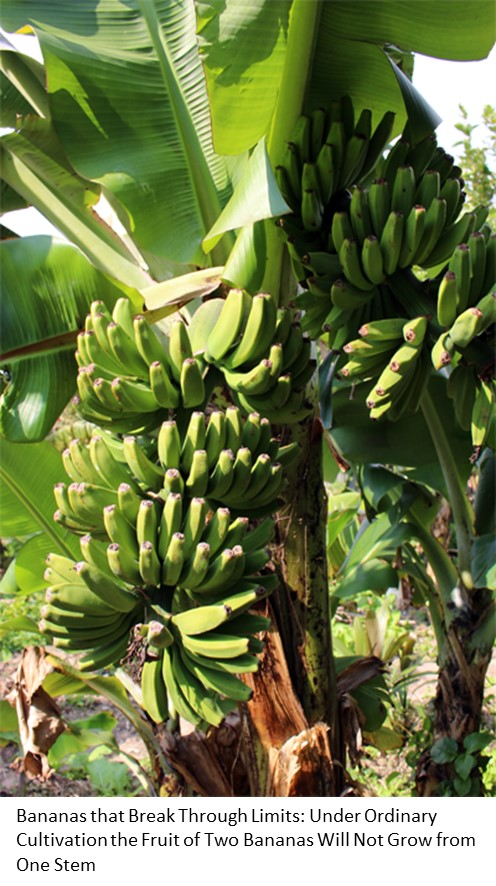 When you thoroughly use EM, you will experience a phenomenon that will bring about a breakthrough, an exceeding of limits in all sorts of fields: increased crop yield and quality, a strengthening of animal and human immunity, and breakthroughs in animal husbandry and in dealing with radioactivity. In other words, a phenomenon that exceeds the capacity of the original varieties. In the photograph, for example, you see what was considered impossible, namely a bunch of two bananas attached to one stem.

I have written about breaking through limits with various crops in my book The Use of Microorganisms in Agriculture and Environmental Preservation (Nobunkyo), but at that stage the rectification power of EM was not yet apparent as what made these breakthroughs possible.

With the passage of time, we have confirmed EM’s antioxidant and deionization action, as well as its power to catalytically convert harmful energy into useful energy, and now I believe that most of this essential power is found in the rectification force of EM.

The application of this rectification force has made nearly permanent the life of lithium ion batteries, has increased capacity three to four times, and has more than doubled the efficiency of electrons. Such effects of EM have been described as a function of the micro-coil within EM. More recently, the Massachusetts Institute of Technology (MIT) is incorporating carbon nanotubes (micro-coil) in plant chloroplasts, increasing photosynthetic capacity by 30% and decreasing, by nearly 30%, the free radicals that can damage cells, thus creating so-called “super plants.” (See the 2014.3.16 issue of Nature Materials magazine.)

This numerical value agrees with what is shown on p. 82 of my book The Use of Microorganisms in Agriculture and Environmental Preservation, namely how fermentation synthetic microbes (EM) increase the photosynthetic capacity of Unshu (Satsuma) mandarin oranges. This experiment was conducted under the direct guidance of one of the leading researchers in Japan on photosynthesis, but at the time the results were announced he declined to have his name listed as co-researcher. 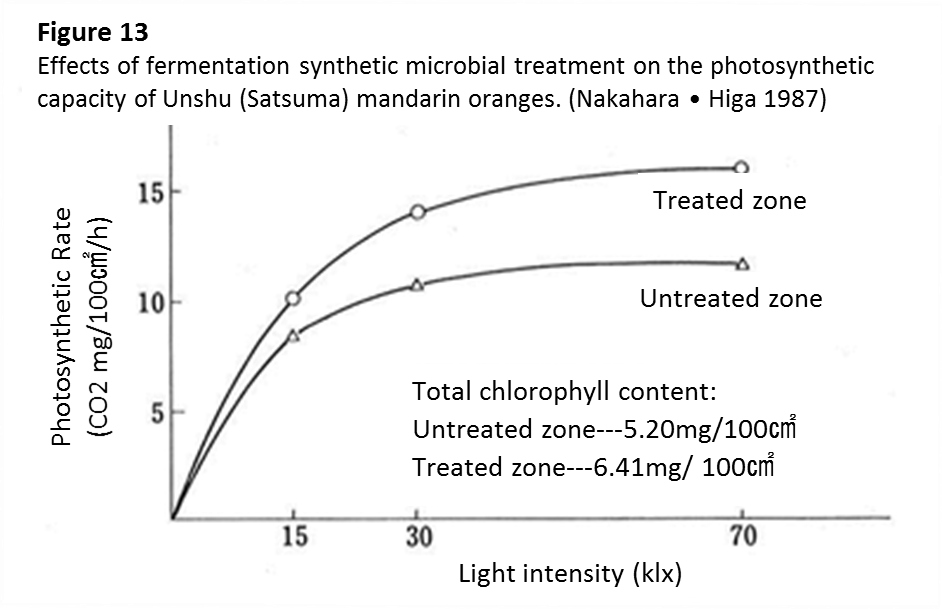 The other researcher balked at having his name listed, saying, “The methods and results of the experiment are error-free, but these figures are abnormally high. Normally it would be difficult in the same variety to create a difference of more than 5% in photosynthesis, let alone this number of over 30%.”
I had no choice but to list the name of the graduate student who conducted the experiment when we published it (in 1987), but at the time no one believed our results. On the contrary, EM was criticized as presenting unreliable data.
There are a number of hurdles to overcome before the MIT study can be put to practical use, but if you use EM effectively you will be able to create super plants quite easily.


How to Make Good Use of EM

First, make good-quality Activated EM that is below pH 3.5, increase the amount of organic matter in the whole soil, and manage the soil so that the microbiome is close to the type of microflora of EM, which has predominantly beneficial microorganisms. And then spray a 100-122 dilution of Activated EM on foliage every few days with a watering can or other method. When you mix in super Serra C (EM ceramics powder) in a 1,000 to 2,000 dilution, it will be even more effective.

If, however, insect pests still appear, thoroughly spray the whole with a 3-5 part dilution of good quality Activated EM. It is even more effective if you add 1:500 parts super Serra C. If you spray this once every 2 to 3 days for a total of three times, most insect pests will disappear.

Not only does the sprayed EM rectify the electron flow of the plant body to increase efficiency, it also improves the microbiome of the soil and the rectification power in the soil. In part it is critical to continue to use EM until results are seen because continued use will improve and stabilize the rectification power of EM.

Conversely, the various effects of an EM lifestyle are directly linked with the essential power of EM, in other words its rectification force. Every bad thing--the environment becoming worse, increased health hazards, and crops that do not grow sufficiently—is due to a disturbance in electron flow, causing resistance and a remarkable decrease in efficiency.

Photo captions:
Bananas that Break Through Limits: Under Ordinary Cultivation the Fruit of Two Bananas Will Not Grow from One Stem
Dr. Higa’s book The Use of Microorganisms in Agriculture and Environmental Preservation 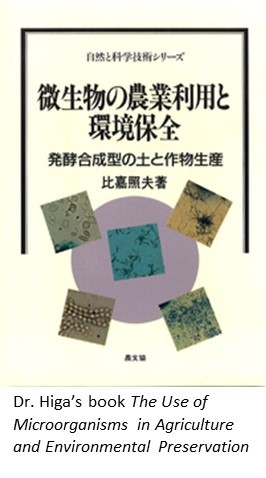