In August, I received some exciting information and I would like to introduce this achievement to everyone.
The purification of the Dairyuji River has not only cleaned the river, but also the sea, and there are reports that it has enriched the marine ecosystem by reviving sea grasses such as tengusa, (gelidiaceae), thus achieving a virtuous cycle of environmental purification.

I would like to recommend that all elementary schools use this as a textbook for learning about environmental purification. At the same time, I would like to take this opportunity to express my sincere gratitude to Mr. Jiro Kato, who has led this activity from the beginning.

It’s been so hot these days, and I would like to extend my best wishes to you during this hot season.
We have published a booklet titled “The Cleaned-up Dairyuji River in Senami,” which was serialized in the Murakami Newspaper, hoping that children can read it easily. This booklet is a record of the cleanup of the Dairyuji River from the Showa era to the present Reiwa era. You came to Murakami City in 1998 and gave us guidance when the whole town was struggling with foul odors. Now the river is clean and we are truly grateful. Thanks to you, the purification activities are still ongoing., and we look forward to your continued guidance.

Please take care of yourself during this hot weather. 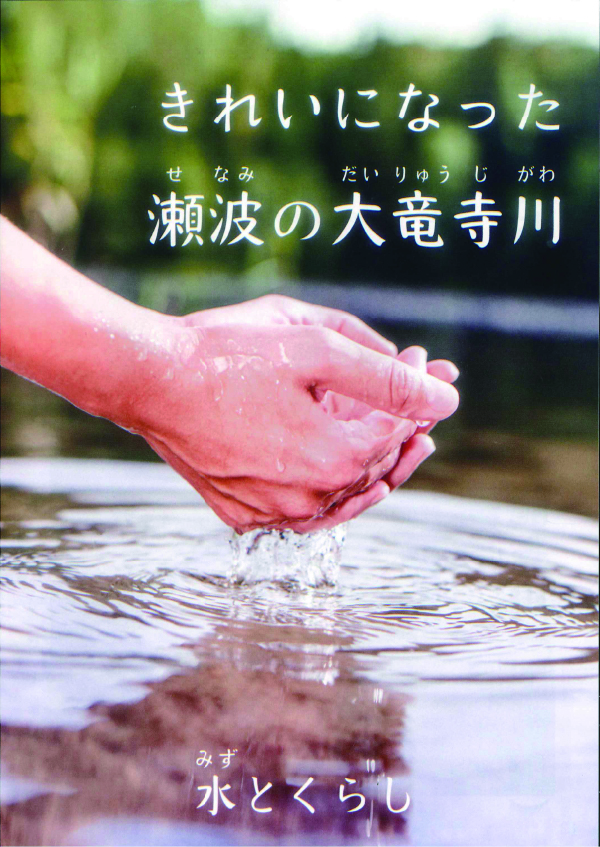 "Water and Our Life" 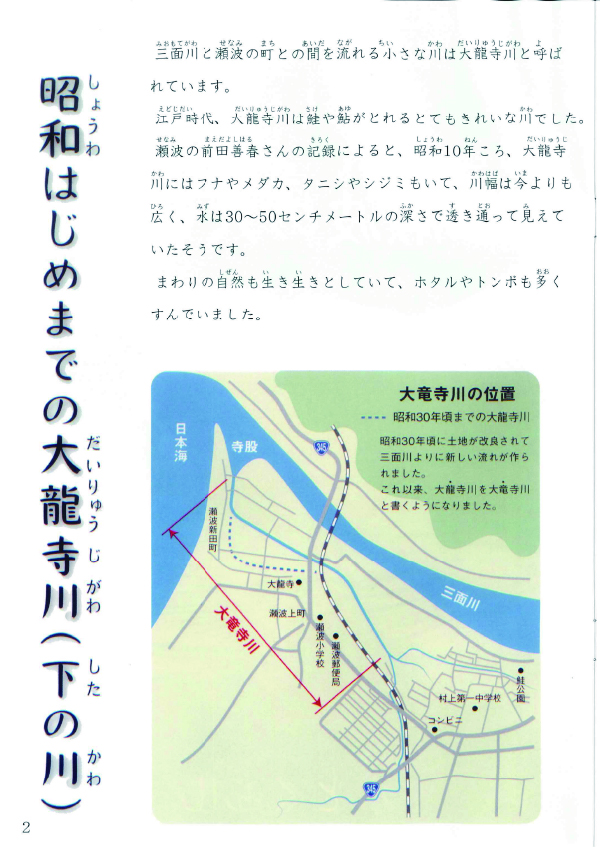 The small river that runs between the Miomote River and the town of Senami is called the Dairyuji River. In the Edo period (1603-1868), the Dairyuji River was a very clean river where salmon and sweetfish could be caught. According to the records of Mr. Yoshiharu Maeda of Senami, around 1935 there were crucian carps, killifish, Japanese pong snails and freshwater clams in the Dairyuji River then. The river was wider than it is now, and the water was clear to a depth of 30 to 50 cm. The surrounding nature was also vibrant, with many fireflies and dragonflies found in the area.

Location of the Dairyuji River 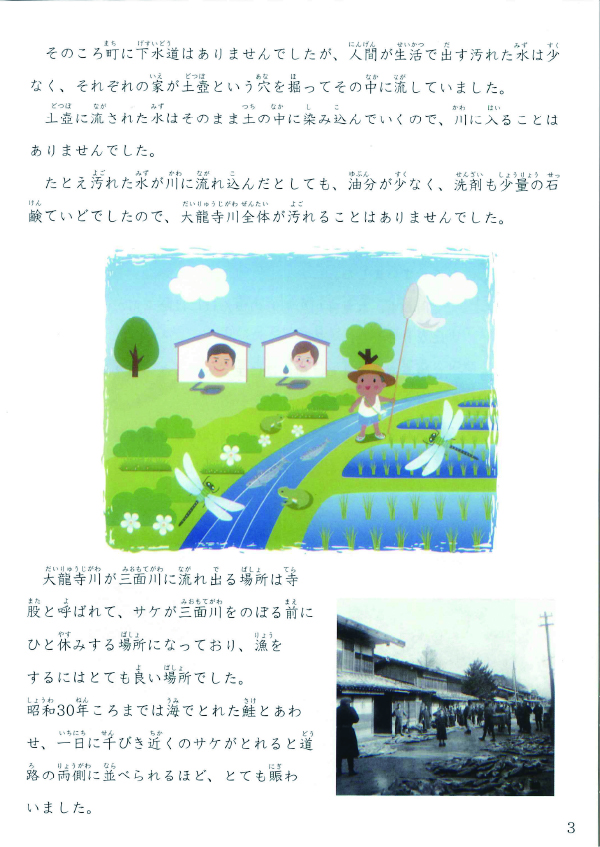 At that time, there was no sewage system in the town, but the amount of dirty water that people produced in their daily lives was small, so each household dug a hole, called “Dotsubo,” an earthen jar in the ground, and drained sewage into it. The water that flowed into the earthen jars soaked into the soil as it was, so it never entered the river. Even if polluted water flowed into the river, it did not contaminate the entire Dairyuji River because there was little oil and the detergent used was only minimal amounts of soap.

The place where the Dairyuji River flows into the Miomote River was called Teramata, and it was a good place for salmon to rest before they continued up the Miomote River, making it an excellent spot to fish. Until around 1955, the area was so crowded with people that when nearly a thousand salmon were caught in a day, they were lined up on both sides of the road, including salmon caught in the sea. 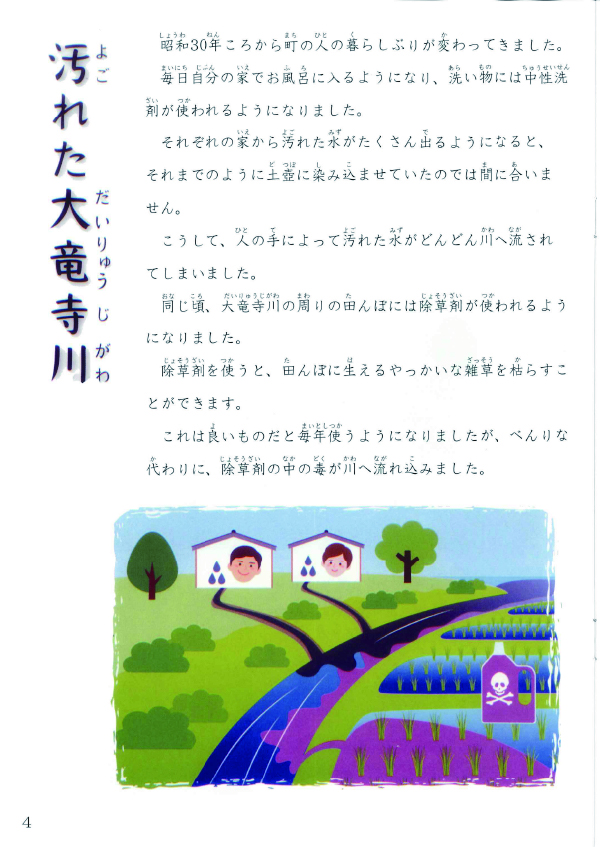 Around 1955, the lifestyle of the people in the town began to change. People started to take a bath in their own homes every day, and they started to use a neutral detergent for washing. When a lot of dirty water was discharged from each household, the earthen jars were insufficient to contain it the way they had. Thus, because of people more and more dirty water was discharged into the river.

Around the same time, herbicides began to be used in the rice fields around the Dairyuji River. Herbicides kill the troublesome weeds that grow in rice fields. People started using these every year, but instead of being convenient, the poison in the herbicide flowed into the river. 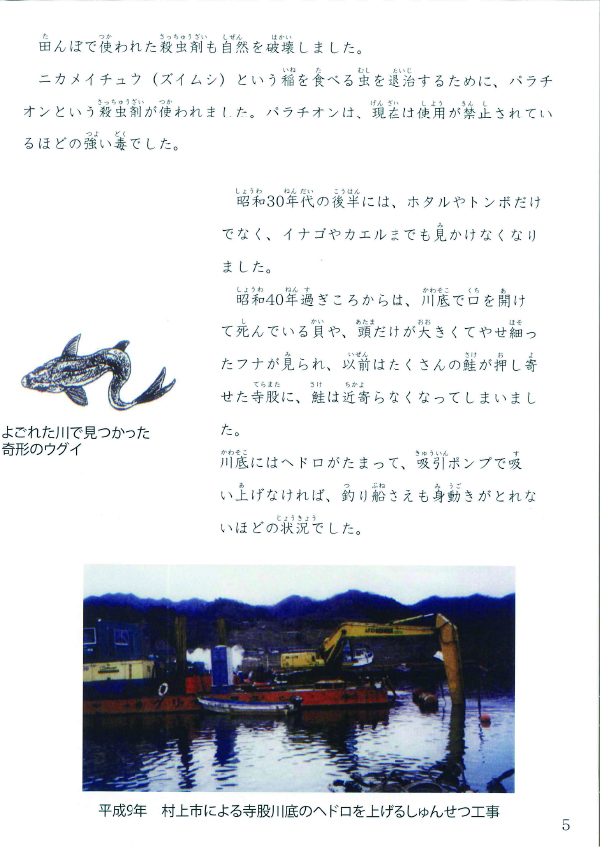 Pesticides used in the rice fields also destroyed nature. An insecticide called parathion was used to kill the rice eating insects known as nikameichu (Chilo suppressalis Palacio) and was such a powerful poison that it is now banned.
In the late 1950s, not only fireflies and dragonflies, but also locusts and frogs, disappeared.

After 1965, we started to see dead clams with their mouths open on the river bottom and skinny crucian carp with large heads, and salmon stopped coming to Teramata, which used to attract so many. Sludge had accumulated on the bottom of the river, and even fishing boats could not move unless the sludge was periodically removed by a suction pump.

A deformed Japanese dace found in a polluted river.

(Photo)Dredging work by Murakami City in 1997 to remove sludge from the bottom of the Teramata River. 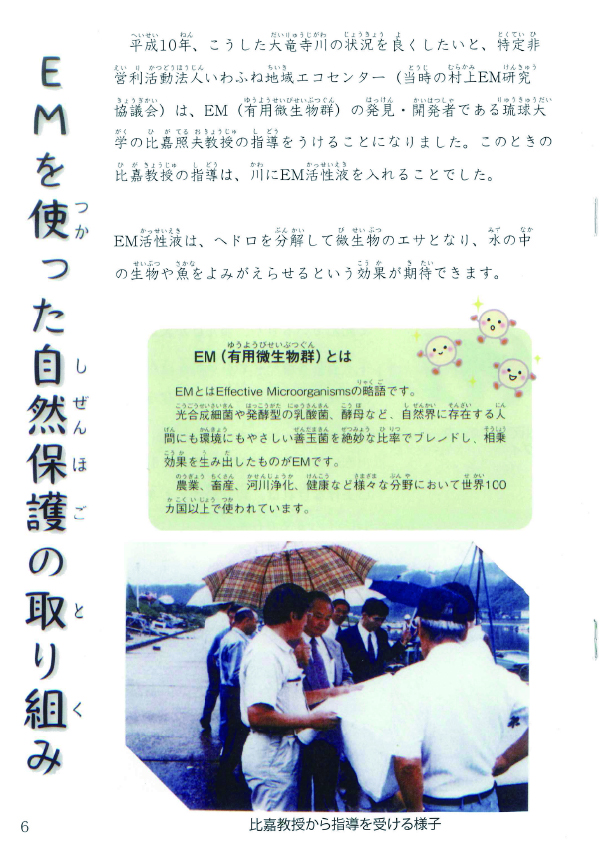 In 1998, in order to improve the situation of the Dairyuji River, the Iwafune Regional Eco-Center (then known as the Murakami EM Research Council), a non-profit organization, sought out guidance from Dr. Teruo Higa of the University of the Ryukyus, the discoverer and developer of EM (Effective Microorganisms). Dr. Higa’s advice at this time was to apply activated EM into the river.

The activated EM solution decomposes sludge and serves as food for microorganisms, and we expected it would revive the organisms and fish in the water.

What is EM (Effective Microorganisms)?

EM is a synergistic effect created by blending phototrophic bacteria, fermentative lactic acid bacteria, yeast and other naturally occurring beneficial bacteria that are friendly to both humans and the environment in a perfect ratio. It is used in more than 100 countries around the world in such fields as agriculture, livestock, river purification, and healthcare. 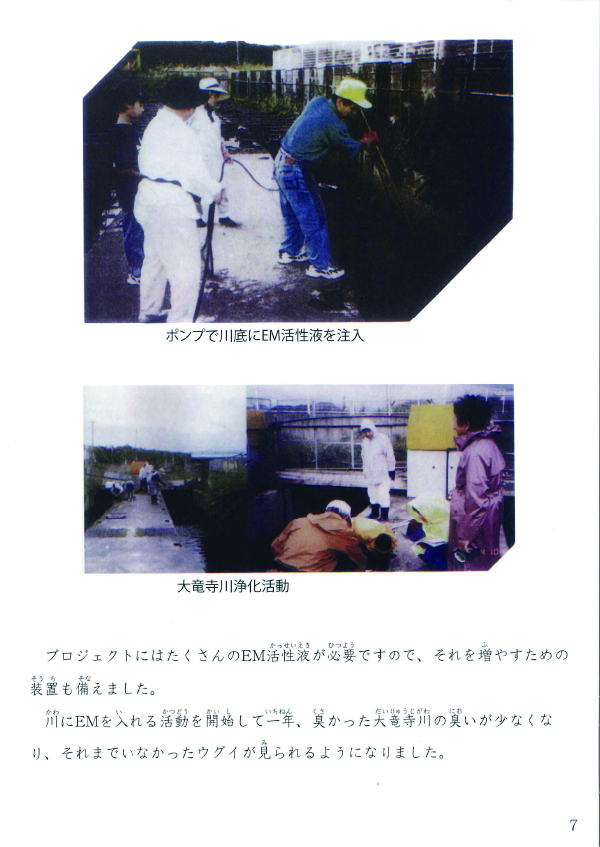 (Photo) Injecting Activated EM・1 into the riverbed with a pump

Since the project requires a lot of Activated EM・1 , we have also installed a device to increase the amount. One year after we started applying EM into the river, the foul smell of the Dairyuji River decreased and we started to see Japanese dace, which had not been seen there before. 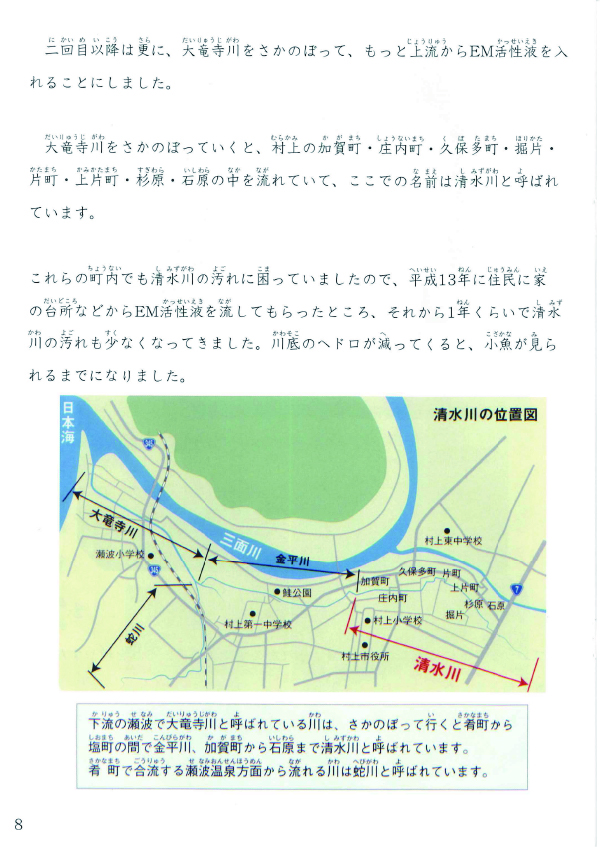 In these towns, they were having trouble because of how dirty the Shimizu River was, so in 2001, we asked residents to use Activated EM・1 in their kitchens and other places, and within a year or so, the pollution of the Shimizu River had decreased. As the sludge on the river bottom decreased, small fish began to appear. At the Iwafune Regional Eco Center, it used to be difficult to increase the amount of activated EM, but in 2001, we succeeded in increasing the amount by using the heat from the Senami hot spring. We are now able to make a lot of Activated EM・1, and since 2017, we have been distributing 200 to 300 liters of activated EM every week, 50 times a year, to the households along the river that have been working with us.


Nowadays, everyone is concerned with protecting the environment, the sewage systems have been linked up, and the river has become cleaner with sweetfish and salmon appearing.


(Photo) In 2017, salmon run-up was confirmed in the Dairyuji River. 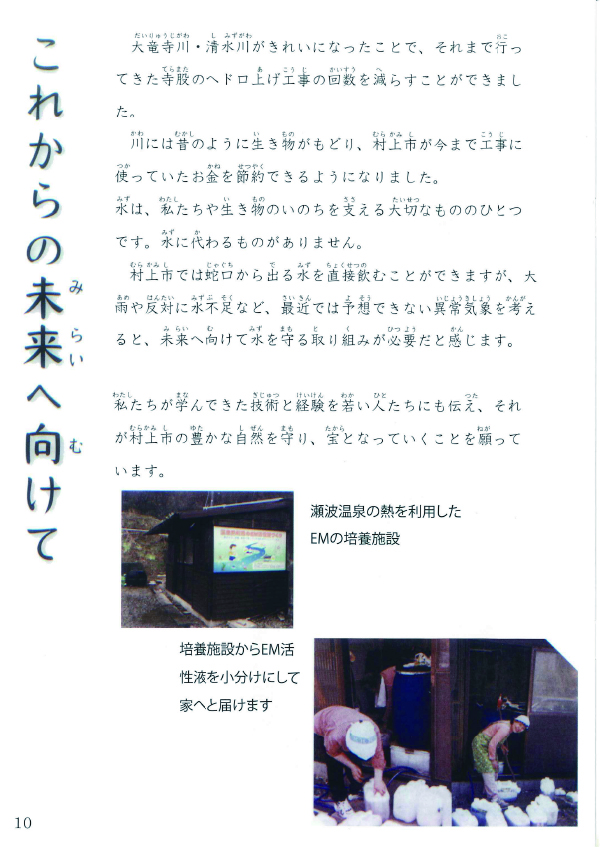 Since the Dairyuji River and Shimizu River have been cleaned up, we have been able to reduce the number of times we have had to dredge sludge from the Teramata River

Living creatures have returned to the rivers, and Murakami City has been able to save the money it used to spend in dredging sludge.

Water is one of the most important things that support us and the lives of all living creatures. There is no substitute for water.

In Murakami City, we can drink water directly from the faucet, but considering the recent unpredictable abnormal weather conditions, such as torrential rain and, conversely, water shortages, we feel that we need to work to protect water for the future.

We hope that the skills and experiences we have learned will be passed on to the younger generation, and that this will help protect the rich nature of Murakami City and make it a treasure.

(Photo) Activated EM・1 is delivered in small portions from the culturing facility to each household. 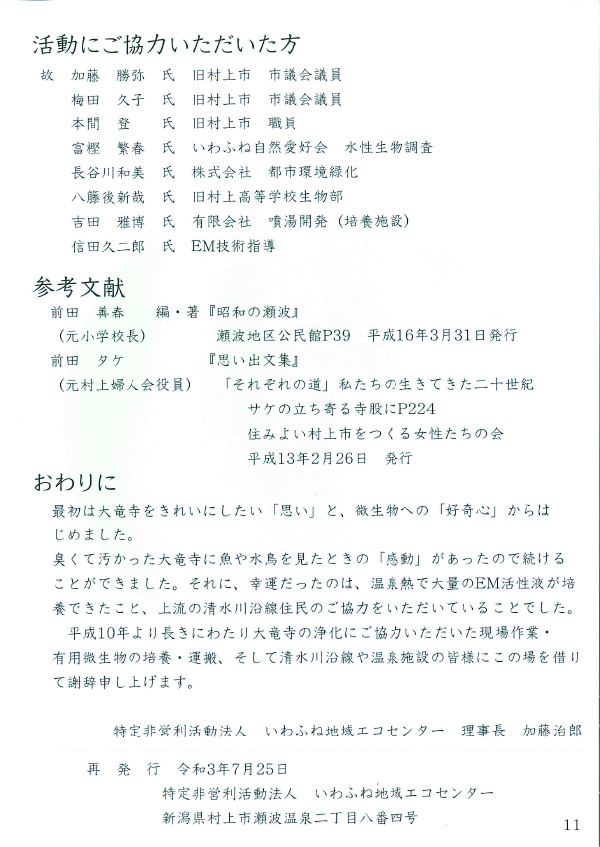 People who supported our activities


Take Maeda (former officer of the Murakami Women’s Association)
Memories Collection, Each Road: Our Lives in the 20th Century

Teramata where the salmon stop by (page 224)

We started out with the desire to clean up the Dairyuji River and a curiosity about microorganisms. I was able to continue because I was so impressed when I saw fish and water birds in the Dairyuji River, which used to be smelly and dirty.

We were also fortunate to be able to use the heat from the hot springs to cultivate a large amount of activated EM, and to gain the support of the residents along the Shimizu River upstream.

I would like to take this opportunity to express my gratitude to all the people who have supported the purification efforts in the Dairyuji River ever since 1998, including those involved in the onsite work, the cultivation and transportation of EM, and the people along the Shimizu river and at the hot spring facilities. 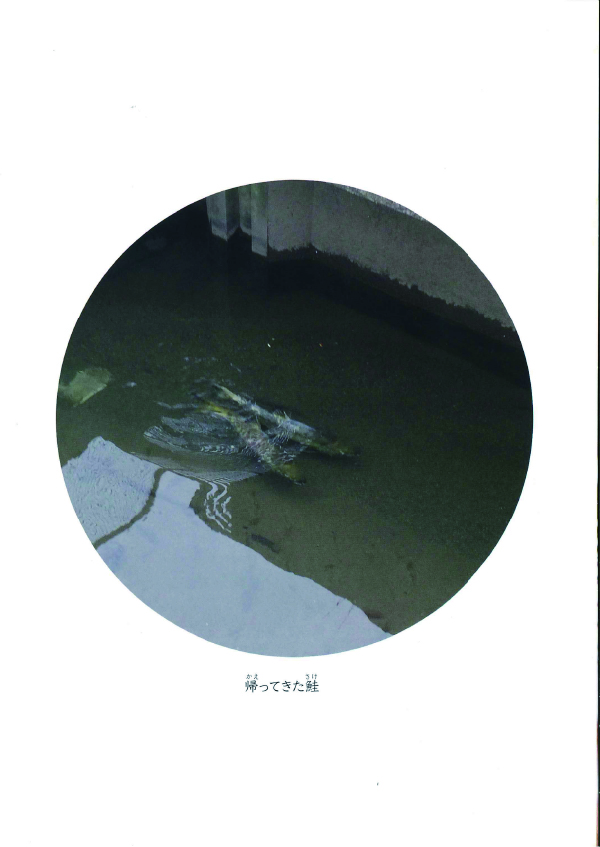 The salmon that came back

※Mr. Kato’s activities are introduced on the following page.

Three newspapers and other media published articles on the “School of sweetfish in Dairyuji River” / EM Seikatsu Corporation
https://www.em-seikatsu.co.jp/contents/shop/report_detail.php?id=1738