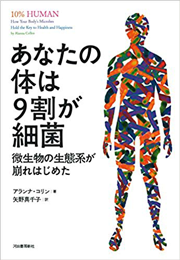 In the last issue, #131, I explained about health related Hado (wave energy) from a quantum mechanical point of view. The soil sample of Arumu Farm shown in Table 1 is almost perfect and because the immunity is extremely high, I said that this means that you could actually eat the soil.

In the EM world, it has been common knowledge from the beginning that the microbiome (microflora), which is mainly based on beneficial microorganisms, is inextricably linked to crops, environment and human health, but historically this idea was initially totally denied.

In the past five to six years, as research on soil microflora has progressed rapidly through metagenome analysis, various new findings have come to light. 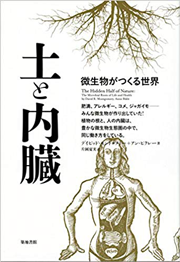 which was introduced in this journal (see issue #111), is a typical example, and afterwards the bookThe Soil and Internal Organs was also published, which addressed this point exactly. Fecal transplantation of beneficial microorganisms has become common now, as well as clay derived from microorganisms such as montmorillonite and based on the results from the livestock industry, and many types of clay are now considered health food.

The book I would like to introduce this time is Eat Dirt by Dr. Josh Axe. This book reaches the conclusion that some things considered dirty can dramatically improve health, and that it is better to eat the dirt that adheres to organic agricultural products. 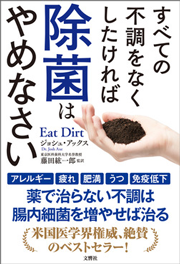 The Japanese title is If you want to get rid of all disorders, stop disinfecting and eliminating bacteria.
The cover page says that disorders that cannot be cured by medicines can be cured by increasing enteric bacteria, that this book is endorsed by US medical authorities, and is an acclaimed best seller (published by Bunkyosha 2018).

The important points are as follows:
The key point of this book is that all these issues can be solved if you fully implement the EM life style, including of course the consumption of EM grown crops and EM fermented foods. At the same time, it is important to remember that EM has the power to render many harmful chemicals and radioactive substances harmless.

Table 1 shows the hado measurements regarding the health of the soil in which EM is applied, obtained through the cooperation of Mr. Nomoto of Matsuyama City, who is an EM goodwill ambassador.

First of all, the general fields are at the level of the two on the left hand side of the chart: the general mandarine orange field in Tobe town, and the field at Arumu Farm using cow manure with bark. This soil is impossible to eat and is also harmful to health.

The third row shows a modification to the second row, using EM with the cow manure and bark; a considerable improvement is seen, but considering the immunity hado level, etc., it is also impossible to eat this soil.

The fourth soil sample uses the salt of the Arumu Farm introduced last time, mixes the residue of Chinese cabbage, charcoal, the waste fungus bed, makes an EM boundary, and improves it by the method of raising hado energy of the whole greenhouse by using power stickers. This soil can be eaten, as I mentioned last time.

The rightmost column shows results of the soil at Shinsen Spark Farm. This is the soil of the rice field introduced in issue #124 of this series. Brown rice produced in this soil has an all-round health potential, as shown on the right side of Table 2 in issue #131.

Judging from the results of the brown rice, we predict that the immunity of the soil of Spark Farm will be considerably improved; even if you use a large amount of EM, the first crop in ordinary rice fields will never reach this level.

In conventional usage of EM we expect to see examples that reach the full 21 point level in 5 to 10 years. But by using charcoal, salt, activated EM with seawater, and boundary technology, we can easily reach figures that are considered ideal in the very first crop. I look forward to further breakthroughs in yield and quality through utilization of this technology.

*1 After modification with cow manure with bark: 100 liters of 1:5 dilution of activated EM liquid with seawater, plus 50g of EM Super Cera Ferment C (EM ceramic powder) per 1 m2 applied.