More than a year after Typhoon No. 19 flooded the area last year, on October 13, 2019, the damage caused by the collapse of the flood banks along the Chikuma River in Nagano Prefecture has been far greater than anticipated. Generally, it takes two to three years for apple orchards that are completely submerged to return to their original state. Including the great flood in southern Kumamoto this year, flood damage due to abnormal weather is occurring more frequently.

It is predicted that such a phenomenon will continue in the near future, but there are limits to what conventional technology can do, and fundamental measures using different perspectives are required.

First, let us take a look at the power of EM graviton farming.

These miraculous apples are the result of work by from organizations such as U-net (United Networks for Earth Environment) centered on EM Seikatsu Inc.. Because it is extremely important information, I will introduce Mr. Iwase’s report of EM Seikatsu Inc. as is. This method can be applied to all fruit trees, not only in areas where disasters are a concern, and it can also make true Nature Farming, completely pesticide-free and free of chemical fertilizers, possible as well.


Recovered from the flood damage from Typhoon No. 19!
EM apples produced in Nagano Prefecture

On October 13, 2019, Typhoon No. 19 brought heavy rain and the flood banks of the Chikuma River, where the water level rose, collapsed. An apple orchard in the lowlands next to the Chikuma River was submerged over a wide range of area. Last year’s harvest and shipment had just begun in early October.

Click here for a video summarizing the situation after the flood. I used EM to control the odor of rotten apples and sludge, and to improve the soil, and worked to restore the apple orchard. At first, since all the apple trees were submerged in water, I thought this year’s harvest was hopeless, but as I continued to spray EM, the trees have regained their vitality and were able to bear fruit this year as well. Please enjoy our Iwaien’s apples revived by using EM!

2000 EM Bracon (EM rectifying blocks made with cement, charcoal, EM ceramic powder, sand and salt) installed around the base of four trees and four tree canopies.

Expanded the barrier with plastic bottles installed every 20m. The rope should be stretched higher than the trees.
(*Currently, a method without using ropes is also being developed)
◆ The damage after the Chikuma River flood banks collapsed
Fruit trees in the entire farmland area and the first floor of the shipping area were completely under water.
◆ Disaster recovery support activities
Implemented as a response from EM Seikatsu Inc.
Out of a total of 3ha of fields, EM graviton farming technology was applied to1.5ha of the most heavily damaged apple fields.

◆ Preparation for 2020 harvesting
Even during this pandemic, volunteers, mainly the staff of EM Seikatsu Inc. helped us to recover from the flood damage.

EM graviton agricultural technology was applied to 1.5ha of the most heavily damaged apple orchard.

【Support received】
EM graviton charcoal from Iwate Compost and the EM Research Organization
We performed maintenance every time we visited after the barrier was set up. (12 times in total)

(Maintenance details)
Checked whether the line of the barrier point was broken or not.
Sprayed EM・X GOLD on barrier bottles.
Added EM water as needed to the drip system that enhances the layering effect.

Throughout the whole process, we were particularly conscious of remembering the poem praising EM and giving thanks to all those who helped us.
◆ Iwaien at the time of harvest in 2020

<Comments from producers>
The results were good since 2018, the first year implementing EM graviton agriculture, and in 2020, the results were better compared to those of neighboring farmers, with the trees so fruitful it was hard for the fruit picking to keep up. Compared to neighboring farmers, the neutral varieties such as Kogyoku, Shinano Sweet and Akibae all have the highest crispness, coloring, taste and yield ever. Fuji, the main late-maturing variety, also reached mature coloring quickly and uniformly throughout the field. This year’s shipment is likely to be earlier than usual. Before working on graviton farming, it was difficult to determine the optimal harvest time because the apples were not evenly colored, and at the end of season they were often overripe and could not be sold, but this year it seems that they can be shipped without any product loss.

Next is information concerning EM-related news in Okinawa.

In April, as a countermeasure against the novel coronavirus, we markedly strengthened the functioning EM graviton barrier through the high-voltage line in Okinawa. We have seen various virus-suppressing effects, especially in plant growth. In addition, it is important to maintain one’s own health by spraying activated EM in a closed space and carrying out a complete EM lifestyle. Furthermore, in winter, put a 1:300-500 dilution of EM・X GOLD in humidifiers to create a comfortable space.


Here I would like to introduce a miraculous wax gourd reported on in the local newspaper. 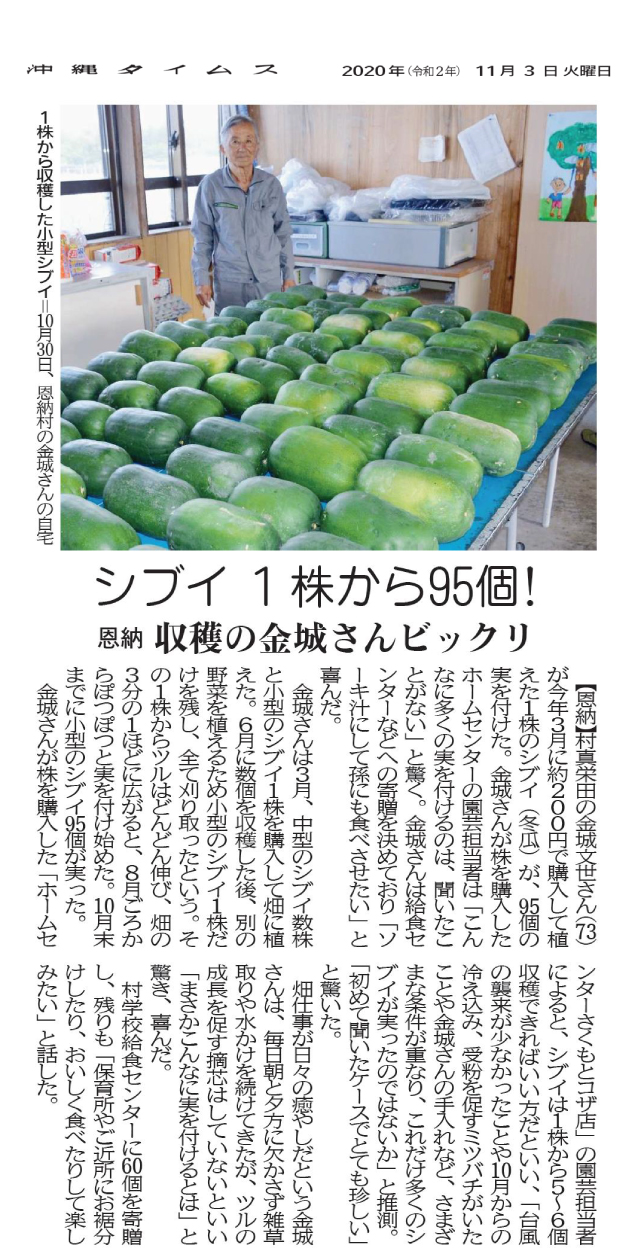 "Producing 95 pieces from one Shibui plant!
Mr. Kinjo was surprised at his harvest in Onna village"

Mr. Fumiyo Kinjo (73) of Maeda, Onna village in Okinawa prefecture, purchased one Shibui (wax gourd) plant for about 200 yen and planted it in March this year, and it bore 95 fruits. A staff member who is in charge of the gardening section where Mr. Kinjo bought the plant was surprised, commenting, “I have never heard of Shibui bearing so much fruit.” Mr. Kinjo decided to donate most of the fruit to a school lunch center, and happily said, “I would also like to make Soki soup for my grandchildren.”

According to the staff member in charge of the gardening section at the Home Center Sakumoto, Koza Store, where Mr. Kinjo bought the plant, a good yield would be five to six Shibui fruits from one plant, and he speculated that a number of conditions may have contributed to the extraordinary yield, including “the fewer number of typhoons, the cold weather from October, the presence of honeybees that encourage pollination, and the good care Mr. Kinjo took of the plant.” He added, “I’ve never heard of such a case. It must be extremely rare.”

Mr. Kinjo, who says that doing field work is a soothing form of daily therapy, has been weeding and watering every morning and evening without fail, but he says that he did not thin the vines to promote growth. He was surprised and happy at the result, commenting, “I never expected for the plant to bear that much fruit!”

He gave sixty Shibui fruits to the village school lunch center, and said that he would like to enjoy eating some and sharing with a nursery school and his neighbors.