My new book A New Earth Saving Revolution, originally scheduled to be published in February, appeared in bookstores throughout Japan on August 22nd. The long delay was because of frequent modifications made to the Pharmaceutical Affairs Law. Through the first edition of An Earth Saving Revolution the term antioxidant power became known throughout Japan and people became broadly aware of the importance of avoiding oxidation, but now the Pharmaceutical Affairs Law has called into question the sale and use of health and medical products that claim antioxidant effects.

As I have explained over and over, many times, the power of EM falls into three categories: (1) antioxidant effects, (2) anti-ionization effects, (3) and the effects it has in using a three-dimensional helical conformation to convert harmful energy into useful energy, and endowing it with energy that is catalytically effective. Because of this, EM has, without exception, revitalizing effects on both organic and inorganic, and living and non-living, material.

I wrote A New Earth Saving Revolution to explain the conclusions I reached that EM could solve the most pressing environmental problem on earth, namely measures to deal with radioactive contamination, and that most diseases can be prevented or treated with EM. However, since these results are connected to antioxidant effects, the most important chapter, one dealing with medicine and health, was completely deleted after the final editing because the majority of it violated the Pharmaceutical Affairs Law. Sunmark Company, the publisher, seriously wanted to protect EM from harm, and I finally compromised with their request. In place of this chapter, I added additional information on the use of EM in Fukushima and Thailand, and the book was finally published, though not in the form I had originally envisioned.

I would like someday to publish this phantom manuscript in a form that isn't illegal.  I published A New Earth Saving Revolution because I could see where a clear solution could be found, not just to the extreme environmental problem of dealing with radiation, but also to the issue of humans and microbes, particularly viruses. When it comes to basic measures to deal with radiation contamination, and with viruses, humans are almost powerless. If EM’s overall functions are in effect, viruses and other microbes cannot create the viral nucleus that will trigger disease. When viruses and microbes cannot create these nuclei, then immunocompetence can fully deal with them, but if they do create nuclei and cause disease, after pyrogenicity one can only wait until there is increased immunocompetence, though in most cases it is too late. There are antibiotics to treat bacteria and mold, but still drug-resistant microbes appear one after another and cases of untreatable hospital-acquired infections are too numerous to mention. If one follows an EM lifestyle, it is possible to deal with these, but I couldn’t write about people in A New Earth Saving Revolution. Instead I wrote about the foot-and-mouth disease that occurred in Miyazaki and Korea.

Foot-and-mouth disease is a virus, as virulent as the smallpox that used to threaten mankind. There is a vaccine, but if this vaccine is used over time, resistant viruses appear, and though the vaccine is useful to stop the spread of the disease, as a rule farm animals that are vaccinated end up targeted to be destroyed. In Ebino City, the distance between cattle barns where farm animals were infected and destroyed, and barns where EM was used and cattle were not infected, was less than 100 meters, something that would normally be unthinkable, since in general the disease spreads within 3 kilometers. This reality was seen not only in Ebino City, but in countless cases in Korea as well.

In 2011 there was not only the East Japan Earthquake and the once-in-a-century flooding in Thailand, but record-breaking rainfall, and this trend is continuing this year. In this book I introduced representative cases of how EM was used in crisis management to deal with damage from the unprecedented earthquake and tsunami. I would again like to express my respects and gratitude to all the many volunteers whose work I was not able to include in the book.

I was also able to report on the results of experiments in Fukushima that showed how EM fermented compost is able to inhibit the resorption of radioactive cesium. These experiments led to official recognition of part of EM’s ability to deal with radiation. In addition, though I wasn’t able to include it in my book, according to test results of a trustworthy research organization, if water or milk with radiation levels below the legal standard (below 10 bcqs for water and below 50 bcqs for milk) is placed in EM Balance pitchers, which are endowed with the functionality of EM, in six hours (for the water) and 12 hours (for the milk) the radiation level will be zero.

On October 8th at Nihonmatsu City in Fukushima Prefecture we are going to introduce many successful cases of dealing with radiation, so that as many people as possible will know about them, and so that they will know that people can live safely even in contaminated areas. All the profits from this new book will go to support the radiation measures project that needs to be supported for the long term. Profits from my previous book, The Law of Syntropy (Revitalization), will also go to support this, and I ask for your understanding and cooperation.

Mongol Project
From August 24th to the 25th the 15th Congress of Asian College Psychosomatic Medicine was held in Mongolia, and I had the opportunity to give a lecture entitled “EM Technology and EcoHealth.” Using mainly application examples from the East Japan Earthquake and the flooding in Thailand, I spoke on how EM should be a core technology for EcoHealth. In addition, there was a presentation on how EM inhibits the resorption of radioactive cesium, and five poster presentations.

At first glance one might think that psychosomatic medicine and EM are unrelated, but EM is necessary, in one form or another, as a first step in all medical treatment. In the poster sessions, in addition to presentations on how safe EM-X Gold is, the inducing of heat protein, and how EM prevents nucleation in EB virus, there were presentations on the use of EM in the Thai flood, and an example of the use of EM in large-scale construction in Malaysia.

Prof. Ishizu (professor emeritus at The University of the Ryukyus) kindly arranged for these presentations to be given. Earlier, he had also created an opportunity for me to lecture on EM and the environment when the 13th Congress was held in Okinawa. At that time Dr. Lkhagvasuren, the president of Health Sciences University of Mongolia, who was attending the Congress, showed a strong interest in EM, asked me many questions, and expressed the hope that EM would be introduced to Mongolia. Eight years have passed since then, and EM is now being used in many fields in Mongolia. At this year’s meeting President Lkhagvasuren served as chairperson, and was quite pleased at the spread of EM in Mongolia.

The day before the Congress met, an EM Technology Forum, co-sponsored by the Mongolian government, EM related parties, and the EM Research Organization, was held at the executive office of the President. Representatives from various research organizations attended, as did representatives from the Japanese embassy, and we had a very passionate discussion about the applications of EM in the problem of air pollution caused by smoke from heating in yurts, sewage treatment and public sanitation, pollution from various mines, salt damage in the desert and the greening of the desert, and various uses in primary industry, and applications in construction, medicine and health, etc.

In most of these fields we have already seen hopeful results, and thus there were almost no negative questions at the Forum. The hope was expressed that EM technology become a government policy in all these fields, and the EM Research Organization and the Mongolian government will work together on all the proposals made, to support all these businesses with the very latest EM technology.

Mongolia is a country of less than 3 million people, a large country with vast areas of desert that relies on mineral resources for its foreign currency. It is not unrealistic to think that through the use of EM it will become a model nation for the future. It is my hope that if one visits Mongolia, one will understand everything about EM, and that it will become an EM showcase for the world. 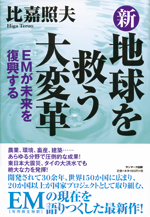 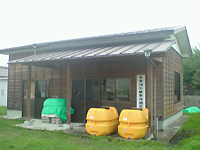 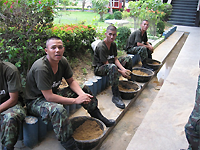 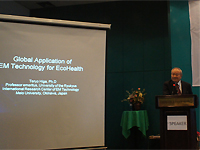 The keynote speech at the 15th Congress of Asian College Psychosomatic Medicine.