#79: Inauguration of the Federation of Diet Members Who Use and Apply Effective Microorganisms

As we begin the new year, 2014, I wish to express my gratitude to all of you who are working with EM-related activities.

On December 3rd of last year a nonpartisan federation of Diet members who use and apply Effective Microorganisms was begun. There were around fifty members in the beginning, and with new members being added since, this will probably grown to over 100 members.

The main theme is how, through the proactive use of Effective Microorganisms, which is safe, economical and pleasant to use, and creates high quality products, to create a sustainable, virtuous circle society, and achieve an overall societal lifestyle that creates a more abundant ecosystem and actively protects biodiversity.

When it comes to solving various issues that exist in society, and building a better society, political solutions have their limits. In other words, within the existing system wherein citizens pay taxes, politicians determine how this money will be used, and bureaucrats put policies into practice, there are problems that cannot adequately be addressed. Even if taxes are raised, no solution can be found if we continue along our present day course.

All problems derived from present day conditions, including our aging society, are structural, and unless bureaucrats are as free to act as ordinary citizens, and act on principles of individual responsibility and contributing to society, it will be impossible to find fundamental solutions.

For example, most illnesses are lifestyle-related, for which each individual is responsible. If that is the case, then individuals should be 100% responsible for medical expenses to treat these diseases. All personnel in medical-related fields should not charge a fee if they are unable to cure an illness. We should greatly limit sponsored care for the elderly and have each person be responsible for their own rehabilitation.

These three points can all be solved if one lives a complete EM lifestyle. If such a lifestyle becomes a duty of citizens, the federation of Diet Members who use and apply Effective Microorganisms can play a major role in making Japan a model nation for the future.

In all environmental policy, including, of course, agriculture, forestry, and fisheries, EM can be employed to save energy, to construct structures that last 5-10 times longer and that, with proper maintenance, can be semi permanent, and at the same time to construct EM houses that create a healthful environment that helps prevent illness. These are no empty dreams; it is steadily becoming a reality. I believe strongly that this is not just my own first dream of the year, but a prophetic dream that can come true, provided there is the political willpower.

The Present State of Measures to Deal With Radioactive Contamination in Fukushima
At the 2nd Environmental Forum Utsukushima EM Paradise held on November 9th, 2013, I made the following remarks:
Since May, 2011 with the help of sites in Fukushima and the cooperation of the Institute of Radiobiology, the National Academy of Sciences, in Belarus, one of the countries affected by the Chernobyl nuclear power plant accident, we have conducted joint research into various measures to deal with radiation.
In nearly all cases the results obtained by both sides are in agreement. Results up to the end of 2013 can be summarized as follows.

1. In farmland where EM has been used, where conditions have been met for its full application, and where cultivation management has enhanced the density of Effective Microorganisms, the absorption of radioactive cesium by crops has been completely suppressed. Further, the yield and quality have increased

2. On dairy farms where EM has been applied, farmers have been able to completely resolve any sanitary issues in barns. Along with this, even if the cows are fed contaminated grass from the area, the amount of radioactive cesium in the milk is below 5 Bq. (National standards call for levels below 50 Bq.) Pastures where waste (slurry) from the animals has been spread show reduced levels of radiation, and it has been established that the absorption of radioactive cesium by the grass is suppressed.

3. Where Activated EM has been applied regularly radiation levels have, without exception, become lower, and if one applies EM in conditions when the moisture content of the soil, through rain or other factors, is high, it will be even more effective.

4. When EM and EM-X GOLD are used it is possible to completely avoid damage caused by ionizing radiation. This also serves to ensure against internal radiation damage.

5. EM also is remarkably effective in suppressing the absorption by crops of radioactive strontium, which is predicted to become an issue in the future.

6. Areas from several meters to tens of meters from where EM has been applied show decreased levels of radiation.
These results have been incorporated into the EM Disaster Relief Support Project operated by the NPO United Networks for Earth Environment, and as the map below indicates nearly forty organizations are implementing this. This year the number will exceed fifty, and we are proceeding apace with preparations to systemically cover the entire prefecture of Fukushima. 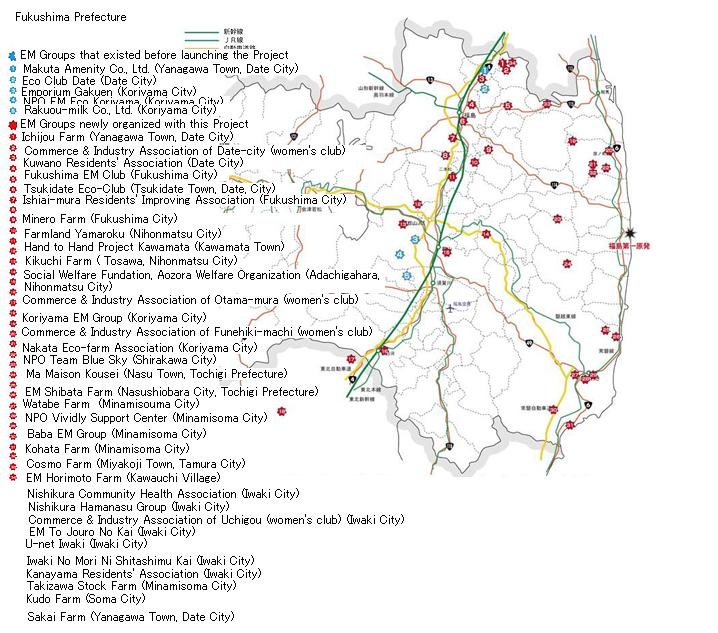 Most people reading this will wonder why such amazing results have not been reported by the mass media, why the government has not adopted this innovative technology, and why instead some people even doubt EM. This can be explained as follows.

Measures to deal with radiation are, by law, entirely the responsibility of the national government. Because of this, the country bases its response on methods that have been acknowledged as effective by academic conferences, including international fora. The mass media thus voluntarily refrains from covering technologies and methods not acknowledged by the government. 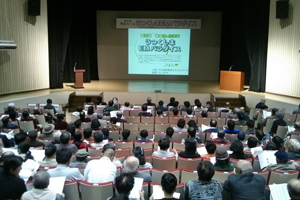 Reports in two local newspapers that radioactivity disappeared through the actions of microorganisms were, by the next day, removed from the Internet. Of course EM was no exception. At both the 1st and 2nd environmental fora we invited about 10 news companies to cover the proceedings, yet neither time did anyone come to cover the events.
The sole means to receive information is the weekly radio broadcasts on Fukushima FM (Mondays from 1:48 pm-1:55 pm) paid for by U-net.

Up till now we have lent one large scale EM cultivation system machinery to each organization, which, when tanks and storage structures are employed means that anywhere from 100-2,000 tons of Activated EM can be produced each year. To set up a system in one place costs between ¥700,000-¥1,000,000 (approximately USD $7,000-$10,000) and we plan to set the system up in even more sites. The ¥35,000,000 budget already expended has entirely come from donations from volunteers both locally and elsewhere, and I am very grateful for this support. If we budget around ¥10,000,000 annually from now on, it will be possible to cover all of Fukushima Prefecture. The government has no right to stop this, it will not be a burden to the EM group, and as a project will contribute to a broad part of the region. No academic can dispute the reality of the results we have obtained.

In hot spot areas that the government is not decontaminating, and areas where low level radiation remains, this method of dealing with radiation is good news for individuals and local administrations that must deal with radiation on their own. Not only is the cost economical, but it will simultaneously take care of environmental problems beyond those of radiation contamination; not only that, if homes and places of production are EM-ized this will greatly promote industry, and will inevitably also enhance people’s health and biodiversity.  In this new year we are planning to continue steadily along the path we have followed thus far.