The 3rd Environmental Forum Utsukushima EM Paradise will be held on November 22nd at the Fukushima Prefecture Education Center in Fukushima City, the same location as last year.  Currently, including Tochigi Prefecture, projects using EM to deal with radioactivity are being carried out at 43 locations, and we are obtaining steady results.

Last September 6th, along with a Preparatory Committee meeting for the 3rd Environmental Forum, we held an interim report meeting in Fukushima City. First of all, I believe that all the participants are confident that the amount of radioactive cesium will decrease, even if there is a difference in the length of time elapsed and the amount of EM applied.

Presenters at the forum are limited to presenters from the first and the second fora.

For other results obtained subsequently, it was decided to have them recorded in the proceedings of the forum or in an appendix.

It is important to collect as many case studies as we can of the reduction of radiation by spraying EM in various places, and to show that there is a tendency for radiation to decrease over time. In the case of Fukushima, even after decontamination (removal of contaminated soil), there are many cases where the level of radiation returned to the original level. It is believed that this phenomenon results from re-contamination from nearby forests, or re-recontamination from the scene of the accident.

It is important in radioactive contamination measures to both reduce contamination and prevent re-contamination. The interim report of this time indicated that in areas where radiation was reduced by use of EM, there have been no cases whatsoever in which radiation levels have subsequently increased.

What is most notable is that the radioactivity in land adjacent to that which has been sprayed with EM has also tended to decrease. Spraying Activated EM as a measure to counter radioactivity was carried out in the sports park in Noda City in 2012. Radiation levels were measured in plot A (227m2) where Activated EM was sprayed, an adjacent plot that was not sprayed, plot B (494m2), plot C (580m2) where Activated EM was sprayed, and the adjacent plot D (494m2), which was not sprayed. Measurements were taken at three spots even further removed (blue benches). (See Figure 1). 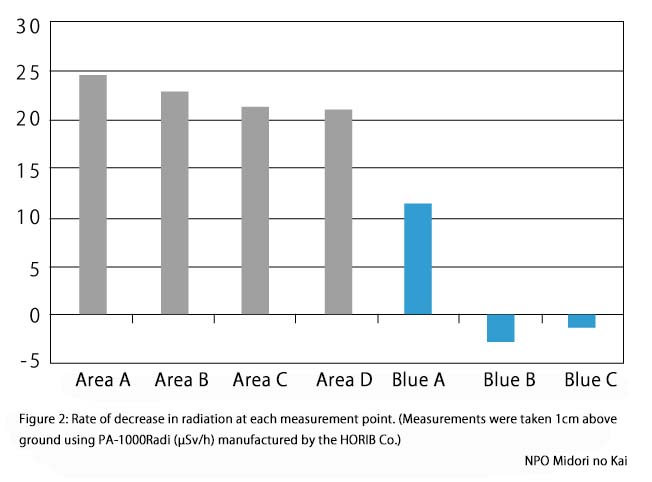 If this were a test of the reduction of chemicals, then the conclusion would be that spraying EM has no effect, but from the standpoint of radiation physics the conclusion is clearly that there is a reduction in radioactivity and that this influence has spread to surrounding areas.

This impact extends to the point of blue bench A, 60 meters removed from the sprayed area. Without exception, the same phenomenon has been observed in the fields of every farmer utilizing EM in Fukushima. The report indicates that the amount of radiation in pastures sprayed with EM-treated slurry (liquid manure) with Activated EM added to reduce odor has decreased significantly, but adjacent pastures where no such slurry has been used have also shown a similar reduction.

From many of the participants I heard that they felt, deep down, that EM has no effect, because after they sprayed EM and then measured the area several meters beyond the sprayed area, they came up with the same numbers. There was a significant reduction in radiation after spraying EM, but it certainly must be puzzling to them to find a reduction in radiation in areas that were not sprayed.

As I have described many times, in experiments in contaminated water purification and breaking down chemicals in water, we have put samples in Erlenmeyer flasks, with varying concentrations of EM added, including a control group of non-treated samples, and examined the changes over time. At first results appeared from the samples where the most EM was added. But with the passage of time all exhibited the same results. In other words, the non-treated samples showed improved water quality, the dioxin and trichloroethylene included in it also disappeared, and various heavy metals become unreactive.

Repeated experiments produced the same results, so foreseeing the presence of waves emanating through the glass Erlenmeyer flasks I moved the non-EM treated samples to the next room. As a result, no changes appeared in the control group.

If you conduct experiments with EM, the same thing will occur wherever you do the experiments, so it is best to move the control group 10 meters or more away. Research institutes that do not understand this do what I originally did, namely place the control groups adjacent to the others. That is why their results have been similar and why there are numerous cases in which researchers have concluded that EM has no effect.

From 1995-2002 joint research in using EM in radioactivity measures was conducted at the National Radiobiology Institute of Belarus, the country most affected by the Chernobyl accident. As a result of that, it was clear that EM technology made it possible to significantly suppress the absorption of radioactive strontium and radioactive cesium in crops, and that EM was effective in dealing with internal radiation and in reducing radiation levels.

We have confirmed the same things in Fukushima. After the accident in 2011 we have again entered into joint research with Belarus, and I am confident in the unwavering efficacy of EM. However, I think that it is extremely difficult to expect the people called physics experts and scientists to understand the current situation. What’s important are the actual results obtained in Fukushima. In the present report, reduction in radioactivity to one-third previous levels is almost a given, and even if certain applications were begun later, without exception they have shown results similar to the results of experiments conducted in Iidate village by the EM Research Organization.

Given the results found in the sports park in Noda, the effect of using EM Technology as wildlife control measures, and results found in areas sprayed with EM up till now, we have found it unnecessary to spray EM over the entire surface as was done before, with the exception of crop fields. In areas in which you would like to reduce the level of radioactivity, spraying in a width 5-10 meters, at intervals of 25-50 meters, is sufficient for it to be effective.

Charcoal and good quality EM chaff smoked charcoal remarkably amplify the waves that EM emits. One way to do this is, after you take out burned charcoal, to soak it in a liquid that is half Activated EM and half EM3 (phototrophic bacteria). Another way is to use the same EM mixture instead of water when you extinguish the smoked charcoal. For pre-made charcoal let the charcoal fully absorb this EM mixture and then allow it to dry. If you bury 0.5-1 kg of this charcoal at a depth of 15-30 cm at intervals of 5-10 meters (at the longest, 50 meters), over time there will be a significant reduction in radioactivity.

When you make EM Mud Balls, use chaff smoked charcoal as half of the material, make baseball-sized balls, as normally made, and bury them at 3-5 meter intervals. They can be applied to paddies, fields, residential land, pastures, and forests. In theory the results (rectification force) are semi-permanent. If the results are not sufficient, increase the amount used.