In the latter half of the series, No.130, I introduced the measurement results of the hado waves to judge the health of Chinese cabbage and strawberries grown using EM. Hado is generally understood as electromagnetic waves with two-dimensional transverse waves, but this common understanding is at the level of humans as animals, not quantum levels. Therefore, it was impossible to measure neurotransmission function, metabolic function, etc. occurring in the human body, including spirituality.

On the other hand, the quantum wave is determined by the tuning level of the directionality and frequency of electrons and magnetism, so detection that was impossible with conventional electromagnetic wave measurement methods has become possible. The waves to judge health are captured through frequency, measuring the resonance level of magnetism and the (quantum beat) *1 resonance level of electrons, detecting these with a special code and quantifying them. As the indicator is the numerical value of the tuning point of the frequency of the photon radiation (biophoton, biological photon) *2 of the living body in the quantum state, even if it is just a wave, the meaning differs fundamentally depending on which state of which part is measured.

In addition, quantum electrons and magnetism change depending on how people think, and the numerical value varies depending on the situation of the measurer, so people misunderstand this to mean that the absolute value of the numerical value cannot be determined. However, by clarifying the evaluation criteria, it has extremely high reproducibility.

With the evolution of quantum mechanics, it is becoming clear that science up till now has been is immature and extremely harmful. In other words, it is clear even by seeing an example that human beings cannot artificially resolve the harm done through radioactivity or chemical substances produced by modern science. On the contrary, medicines developed for the purpose of treating diseases are the causative substances of various intractable diseases, and the current situation including agricultural chemicals etc. presents a picture of human beings as suicidal on a mass scale. Such self contradiction in contemporary science comes about because it disregards probability theory and relies on the dogmatism of the theory of absoluteness.

To escape from this crisis facing humanity, we must abandon the evaluative methods using the dogma of modern science *3, which has produced countless original sins, consider all hypotheses, and employ the best method from a probability theory point of view. In other words, you should follow the essential improvement principle that starts with the principle of cause and result and sees all results as the responsibility of the person who put these into practice, and all results as determined by the level of that individual or group.

The EM world is one of self-responsibility in everything, and is premised on a stand point of contributing to society; introducing a methodology does not guarantee the results, which all depend on the level of individuals and groups involved.

If there is a control group, it is basically 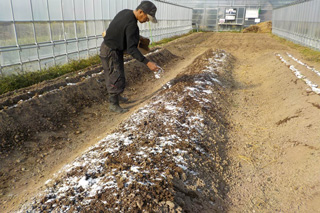 Judging of the effect of things is a comparison with the control group, and probabilistically speaking it will depend on the population parameter, that is, the amount of circumstantial evidence. Although the general measurement of the wave that determines health is based on frequency and magnetic resonance, I think a posteriori reasoning shows it is based on the measurement of the coherent (quantum beat) of biophotons (photons in living organisms).

In the hado measurement method, the conventional standard is that 21 is a perfect score and there is hardly anything that exceeds it.

Also, the reproducibility becomes clearer, and the hado value more reliable, when the same person performs a set number of measurements. The result of having the person who reached this level measure the products grown commercially and the EM grown products is shown in the results with Chinese cabbage and strawberries in issue #130.

The control group is at a not very surprising numerical value, but the EM group has a value deemed impossible based on conventional experience. In conventional EM cultivation, in order to reach 21 on the scale, it was necessary to patiently continue using EM.

This breakthrough phenomenon appears as a matter of course after changing to using activated EM liquid made with seawater, and adding a combination of charcoal and an EM boundary has dramatically enhanced this even further. In order for EM’s gravitons to function, as shown in the Higa theory described in the book All in Love and Microorganisms, the charcoal that has become rectified and superconducting gathers electrons, emits these in a coherent state, and this energy is accelerated by the ions in salt.

In general, coherent states are broken soon and thus cannot continue, but it is clear that strengthening the boundary greatly increases efficiency. 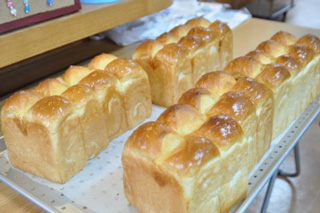 So far, I have explained about the overlapping effect of EM utilizing the principle of pie-kneading conversion, and in order to enhance the hado for judging health as described in the items in the table below, it is fundamental to always strengthen the high quality activated EM solution made with seawater, and use salt, charcoal and an EM boundary.

Table 1 is an example from Mr. Nomoto’s Arumu Farm; he is an EM goodwill ambassador who follows this principle. A natural result of strengthening the overlapping effect described so far is a significant improve in this figure. The fact that the soil is almost at the highest level means that you may even eat the soil. 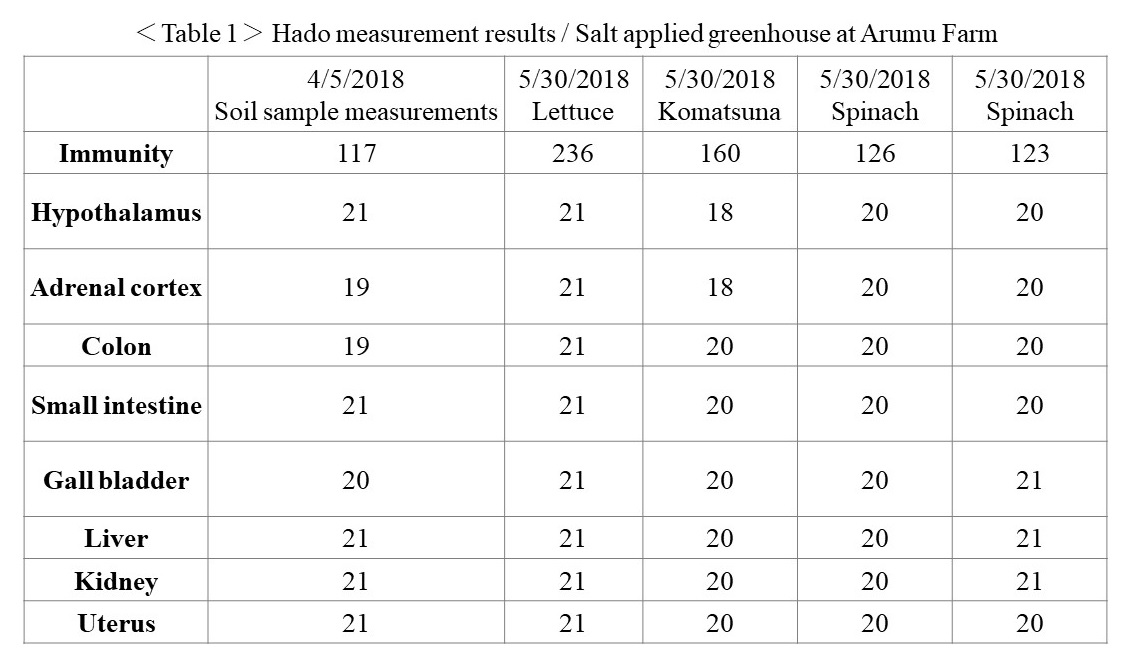 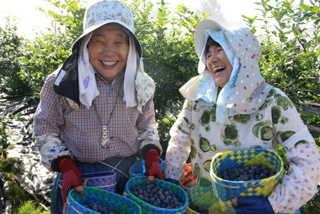 We have asked Mr. Nomoto to check various cases, and it is clear the processed products such as bread, miso, jam, etc. that have been processed with EM-X GOLD or with rectification barriers reveal increased hado that can judge health.

This rice field shows the result of the first year of using more than 500kg of salt, and charcoal and boundaries. The image of our future has become clear, in which food and agriculture produce a safe, balanced diet that prevents and cures sickness. 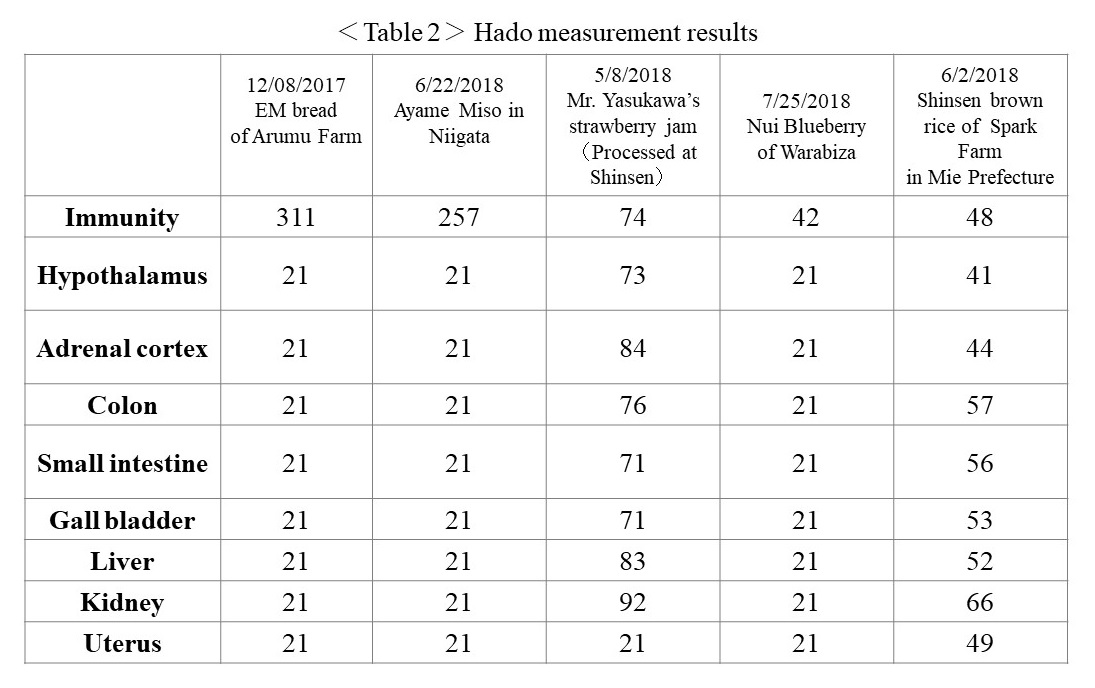 *1  Coherence (quantum beat) : A property of hado in which they interfere with each other. It means that there is a fixed relationship between the amplitude and phase of two (or more) waves. (from the Digital Daijisen)
Coherence generated by EM is considered to be revitalized energy as electrons become superconducting and give living organisms the energy of life.

*2  Biophoton: extremely weak light emitted along with the basic life activities of living things. Spontaneous luminescence associated with intracellular respiration and energy metabolism, and is distinguished from macroscopic bioluminescence in terms of intensity. (from the Digital Daijisen)

*3  Dogma: A fixed strong belief translated into principles or doctrines of a religion, etc.
(August 29, 2018)