More than a year has passed since the Great East Japan Earthquake of March 11, 2011. Many commemorative services have been held, but objectively speaking, in the midst of the global recession Japan has been a winner. Numerous problems remain that must be solved, however, including the issue of radiation in Fukushima, and there is a need for the recovery support system to be reconstituted to deal with all the different circumstances.

At the time of the disaster the main emergency response focused on preventing sanitation problems from occurring, but in places such as Kesennuma City and Shichigahama Town in Miyagi Prefecture, where a system was set up to cleanse the entire area with EM, not only were they able to deal effectively with cleaning the environment, but were able to remarkably increase the yield and quality of marine products.

Normally after a huge tsunami it is said that since the ocean is cleansed, marine products become more abundant, and the use of EM in Kesennuma City and Shichigahama Town linked efforts to cleanse the environment and restore marine products, intentionally using large amounts of EM everywhere. Since the entire region has become a kind of healing place, the people there have become healthier and more active, and visitors find they are the ones who come away refreshed and encouraged.

I mention Kesennuma City and Shichigahama Town as representative examples, but accomplishments with EM have been seen throughout the area affected by the disaster. We have seen, at an increasingly accelerated pace, EM volunteers’ efforts to use EM in daily life and in restoring local communities, and applying EM to the environment and to primary industry. As a result, the recovery support by organizations that encourage use of EM has strengthened even further the existing support systems, has cleansed the local environments even more, has helped maintain the health of the residents, and continues to help nurture the growth of industry.

There are already examples of local towns that have incorporated EM into their recovery plans, and it is my great hope that throughout the region EM will be applied to daily life and industry, and used in crisis management. At the same time, I would also like to continue various support systems so that EM can become even more an essential part of national recovery. In order to deal not just with the areas effected by the earthquake, but with the desire of local towns and organizations to revitalize their communities, we are strengthening the system whereby volunteers and all the other many support organizations—the EM Research Organization (EMRO), the International Nature Farming Research Development Center, the NPO U-Net, the National EM Outreach Association, the EM Laboratory Co., Ltd.,  EM Seikatsu Inc.,  and others—can respond at any time.

The Support System for Fukushima from Now On
Since recovery support in Fukushima will deal with radioactive contamination, it is crucial to continue to build a detailed, sustained support system. The foundation of this will be basic measures to deal with the physical damage to people caused by radioactive contamination, to revive local agriculture, so it won’t be hit by unfounded rumors that cause economic distress, and to deal with decontaminating radiation.

Since last year it has become clear that thorough use of EM will solve these issues. In my book The Law of Syntropy I presented all kinds of basic information, including information on how to deal with extreme cases of radiation contamination, and ways for Eastern Japan to recover after the earthquake. This information has been put into practice by many people, has quickly spread as the very best method for dealing with radiation, and I would like this information to be promoted and understood even more widely.

We reconfirmed in Belorus that drinking EM-X will help people deal with internal radiation exposure; after several months of using it, levels of radiation fell below detectable levels. People in Fukushima who have been taking EM-X have all, as far as I know, shown levels of internal exposure that are below detectable levels, and it is possible to solve the issue of low dose exposure.

For agricultural products in general, we found that, using a germanium semiconductor detector, which is very sensitive and can detect radiation down to the level of one Bq, farmland that measured over 5,000 Bq could produce crops that had undetectable levels of radiation when EM was thoroughly applied (at a ration of 250-300 liters per 10 are). The results are quite reliable, and have been reproduced with no exceptions found. So I am confident that EM has the power to deal with the unfounded rumors that have been negatively impacting agricultural products from Fukushima.

The group headed by Mr. Makuta, of the Makuta Amenity Co., mentioned often in this column, has had excellent results, to the point where they could easily be promoted as part of public policy. The government has rethought the level for the safe amount of radiation in food and set more stringent standards, but people who think this is enough are the exception, and it continues to be an unavoidable measure.

With present levels of contamination, using EM is the only viable option when it comes to pastured beef cattle and dairy cattle. If farmers not only spray EM on pasturelands but actively add it to their cattle’s water and feed, it will be possible to solve the issue of internal radiation exposure in cattle.

With marine products, it is possible to see a real reduction in radioactive contamination levels if, as in Kesennuma City and Shichigahama Town, large amounts of EM are sprayed. I await the results of further investigations into this.
We are also seeing steady results in many places in dealing with radioactive contamination through the use of EM. A systematic approach is needed to deal with high concentrations of radiation, but at the upper limits of contamination we have found in many cases that spraying one liter of Activated EM per square meter results in a 50% reduction in radiation. Results will be seen even more quickly if the amount sprayed and the number of applications are increased, but we have found that even 1-2 applications will, over time, significantly reduce the amount of radiation.

In areas where we have seen these results, some towns and villages have sprayed the athletic fields and grounds of local schools with EM and have plans to wash school buildings with EM. All of these activities rely on the work of volunteers. In Fukushima there are over 20 hubs where EM volunteers have taken the initiative to protect their communities, and they have created a system to culture large amounts of EM. So though they will be able to undertake work on quite a large scale this year, there is a limit to what volunteers can do, and I am hoping that local governments will participate more actively.

There are radioactive hot spots not just in Fukushima but all over the Kanto and Tohoku regions. There are no plans to pay restitution to people there, and the only solution is for residents to take the initiative to deal with the situation. TEPCO (Tokyo Electric Power Company) is entirely responsible for the situation, and districts that use EM to solve their problems have the right to demand reimbursement for expenses from TEPCO. The half-life for cesium is thirty years, and during that time it won't suddenly decrease or disappear, and since the cause and effect relationship is clear, the communities have the law on their side.

In the future we will be actively expanding our support activities to deal with radioactive contamination not only in Fukushima but also in areas where there are hot spots. We have a system in place that will provide the knowhow for people to, on their own, solve these issues. Organizations or local governments should contact EMRO or other EM-related organizations.

On October 8 we will hold a forum in Nihonmatsu City for presentations on successes in using EM to deal with radioactive contamination. Attending the forum will be the head of the Institute of Radiobiology of the National Academy of Sciences of Belarus, which has been conducting joint research with EMRO, who will present findings on the achievements of using EM in Belarus. 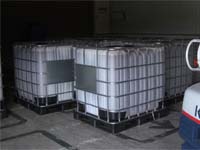 Activated EM Tank at the Agricultural Co-op in Shichigahama Town. 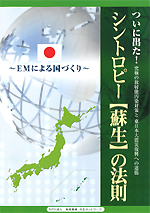 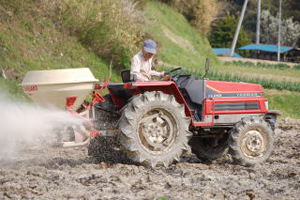