#34 EM Activities in Thailand: Finding Solutions to the Challenges Facing the Nation


In last month’s column I discussed new dimensions in the dissemination of EM in Thailand. One example of this is how, in the drug cultivation region in Ubon Province, near the border of Cambodia, Laos, and Thailand, farmers have converted to EM-based farming. I also touched on how solutions to Islamic terrorism are beginning to be found in the area bordering Malaysia by using EM to raise the standard of living of the people in the region.

The root of both problems lies in poverty and discrimination, leading to the challenges facing Thailand today: drugs, terrorism, and AIDS. With AIDS, it is clear that an EM lifestyle can enhance the immune system and be very effective in preventing the onset of AIDS. In combination with drinking EM, immune antibodies are considerably strengthened, and people who have AIDS can maintain a level of health not much different from that of healthy people, a result that was reported at the International EM Medical Conference last November.

As far as drug countermeasures are concerned, simply clamping down on drugs leads to a vicious circle, and it is difficult to find a fundamental solution to the problem. In the past, poppies were cultivated for medical use and many other applications. Poppies and other narcotic crops are rarely plagued by outbreaks of insects pests, they are unaffected by weeds and, unlike other crops, can grow in any type of soil.

For these reasons there is no special technology needed to grow them; the soil is prepared simply by burning off weeds and sewing the seeds. It is so simple anyone can do it. It is easy to begin growing narcotic crops, for they can be grown in mountainous areas and places never used for cultivation, by people who do not own agricultural land. Once they begin getting an income from the crops, it is very difficult for them to stop cultivating them.

At first glance farming looks simple, something anyone can apparently do, but it requires knowledge of various kinds, a variety of skill sets, and experience, for one must know how to preserve the land, prepare the foundation for growing, including acquiring water rights, improve the soil, and know how to cultivate various crops, and the countermeasures that must be taken against weeds and agricultural pests, how to best market one’s crops, etc.

As an aside, in Japan many industries, especially the construction industry, have tried to undertake farming, but the majority of them have failed. In Thailand the people who cultivate narcotic crops include those who have not been successful in regular farming, poor people who do not possess farmland of their own, people who, for some reason, have moved from the cities to other regions and cannot make a living except through cultivating narcotic crops. At the same time, they are unable to provide for their children’s education. Sometimes the parents die of illness, and the children wind up as orphans mixed up in drugs. Poverty and discrimination become even more pronounced as the bonds that hold together local society are lost.

Countermeasures to Combat Poverty and Drugs

Once this situation takes root, a solution becomes extremely difficult. In 1997, as Thailand faced a severe economic crisis, many city dwellers headed back to the countryside, which accelerated the poverty in farm villages. In this grave situation King Phumiphon proposed an “economy of self sufficiency not controlled by a money economy,” and promoted so-called King’s Projects in all regions of the country.

As I mentioned last time, EM has been instrumental in bringing about this “Sufficiency Economy.” The military has been the crucial in promoting the King’s Projects, using  EM in Ubon Province to combat poverty and drugs, and the key player in this has been Lt. General (at the time) Pichate.

The connections between EM and the Thai military go back to 1989, in attempts to develop farming villages in northeast Thailand that have been impoverished through years of natural disasters. The military sent several personnel to the Nature Farming Asia Human Resource Development Center in Saraburi Province where they underwent a four-day training course. As they put what they learned into practice within the military, they also trained EM leaders and began using EM in relief efforts in rural villages.

In Ubon Province they created various models to make it easy for farmers to put this into practice, and completed an intensive farming system whereby one could have a completely self sufficient farm that raised, among other things, fish, chickens, and hogs, in the space of only 300-400 tsubo [approximately 991-1,322 sq. meters]. This system, which needs no chemical fertilizer, pesticides, or farm equipment, is starting to become accepted as a natural way to farm among small-scale farmers in Thailand, but at the time it was seen as a innovative, cutting edge technology.

Training of farmers continued, and since EM leaders from the military regularly visited farmers and gave them thorough instruction, more and more farmers became independent, turning away from raising narcotic crops. As a result crime went down and the situation looks hopeful now.

At the same time, EM was introduced at a residential school that houses orphans and children of impoverished families and it began to be used in vocational training aimed at the children’s futures, and in making the school itself more self sufficient. The school has 1,600-1,800 students, from elementary school to high school age, and they are putting into practice the real, fundamentals of education; the school is like one big family, with students helping each other, studying together, with older students helping the younger ones and younger students respecting the older students. They also have a very active after school program wherein the students teach what they’ve learned about EM Technology to their parents, and all the instructional faculty at the school have become EM experts.

High Praise from The United Nations
Buddhist priests from temples in Thailand have also actively participated in this project to combat poverty and drugs, forming one corner of a strong triangle linking schools, temples, and the military. Being a Buddhist country, in Thailand any activities involving temples are given the highest priority, and priests are the most respected of local leaders in this project. As another aside, the Thai Buddhism Association is also promoting the “EM Lifestyle,” and its director has, like Mr. Somchai, Minister of the Ministry of Social Development, publically advocated that people drink EM.

Lt. General Pichate used this experience to put it into practice when he was commander of Thai forces in East Timor, greatly aiding countless refugees and helping them become independent. His efforts were highly praised by the UN and he was later promoted to Major General. Afterwards he was made commander of the south region of Thailand, where he dealt with the aftermath of the earthquake and tsunami off Sumatra, and implemented countermeasures against Islamic terrorism in the region.

Based on his experiences in Ubon Province and East Timor, Lt. General Pichate recognized clearly that the roots of terrorism in the south lay in poverty and discrimination, and he undertook to help impoverished farmers become self sufficient and to address health issues. Because of lingering issues, during the first one-two years he found it difficult to win the trust of the local people, but as good results were seen terrorism was drastically reduced. These achievements were widely recognized, he was promoted to Lieutenant General and gained everyone’s complete trust.

On February 17th I took a large military helicopter from Hat Yai International Airport to the military headquarters in Pattani Province and I visited the EM training center and electronic treatment clinic next door. I could tell right away that the center was a sort of EM model village, with a system set up whereby various kinds of training are completed in a single day. They train 300 people each day, five days a week.

They trained over 120,000 people last year, and because of my visit they arranged a leaders workshop in the Muslim region. I heard many reports of EM activities in the region and was asked many questions. The questions were very informed and full of a sense of mission that through EM Technology not only issues of poverty and discrimination can be solved, but also larger social problems such as the environment and health issues.

With the aid of the Ministry of Social Development, a similar training center has been started in the south of Thailand, and last year there too over 120,000 people have been trained. This is an unprecedented style of training, and I am confident that it will become the model for the entire world, showing how to use EM to solve issues of poverty and discrimination. 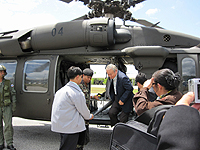 Arriving at the Army site near the Malaysian border. 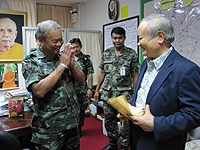 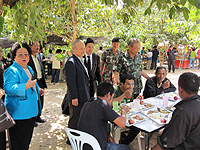 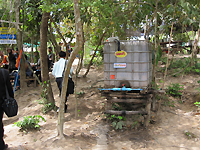 Cultivation tanks at the training center 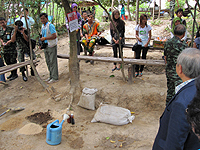 Lecture on how to make Bokashi 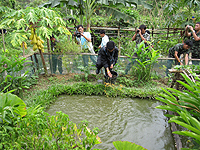 A catfish nursery, part of the “Self Sufficiency Economy” 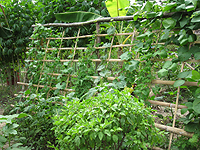 A self-supporting vegetable garden, also part of the movement towards a “Self Sufficiency Economy” 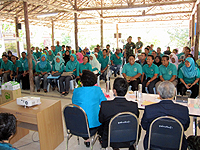 Leaders workshop in the Muslim region