When you make a high quality activated EM solution and continue to use it until it is effective, EM will make miraculous results a reality. Following this basic principle, using rectified charcoal and salt to create EM barriers and improve the quality of the activated EM solution, will lead to a series of miracles that can solve all problems. (Photo 1)

Here I would like to introduce the case of Naruto City, Tokushima Prefecture, which was presented at this year’s Shikoku EM Festa, “The Virtuous Cycle Tokushima Gathering.”

This example from Naruto City shows that if you continue to use EM, the drainage channels, rivers and seas around you will become clean, there will be increased biodiversity, and the entire natural environment will be enriched. As a result, we see the miraculous reality of storks flying in to Toyooka City on the Sea of Japan, starting to roost and raise young, and a steady increase in their numbers.

This fact has had a tremendous effect on children’s environmental education, and at the same time this purification of the environment has become a driving force in strengthening the community by helping bring local residents together in an enjoyable way. In all this we can envision the future of the Seto Inland Sea.

Case Study Presentation #3 Twenty years of EM use with the aid of local government Matsuo Fujimura, Chairman of the Naruto Federation of Environmental Health Associations

Naruto City, the gateway to Shikoku, is located in the northern part of Tokushima Prefecture and has a population of about 57,000. In the north, the Naruto Strait, famous for its whirlpools, is a marine production area, while the eastern and southern regions produce sweet potatoes grown in sandy soil, as well as lotus roots, and boasts the second largest shipment of lotus roots in the nation. In the western region lies Ryozen-ji Temple, visited by one million people a year, well known as the first stop on the eighty-eight temple Shikoku Pilgrimage. 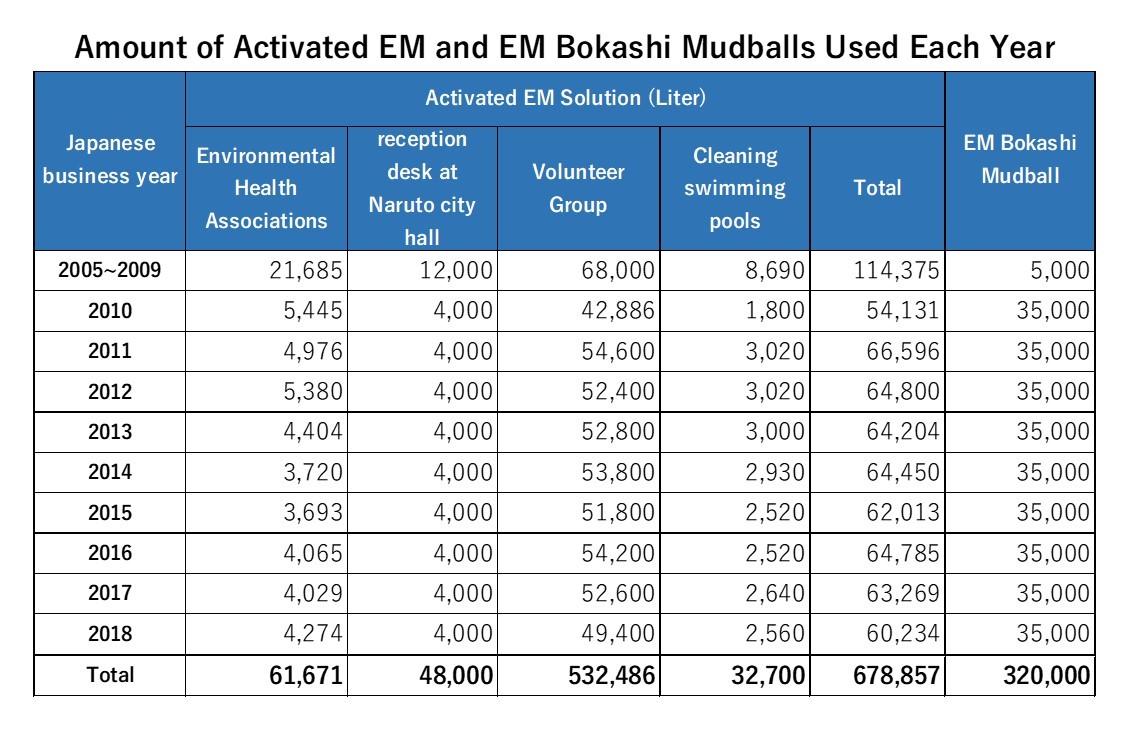 In the center of Naruto City are salt fields that have been reclaimed and converted into residential areas, so the waterway for the salt fields (called the Mizuogawa River) was flooded with rainwater and household wastewater, causing sludge to accumulate and give off foul odors. In 2001, the West Naruto Volunteer Group, with the support of the local government, worked on water channel purification using EM, and had excellent results, with a significant reduction of odors and a return of small fish and shellfish. As part of this effort, since 2006 the Naruto Federation of Environmental Health Associations has, each year, distributed two liters of activated EM solution to each member in hopes of improving the environment they live in. In the first year, people were skeptical, but after the foul odors disappeared, use of EM became increasingly popular, and many people requested activated EM solution, so we distributed two liters of activated EM solution to whoever wanted it at the reception desk at the Naruto city hall, a move that was very well received.

In Naruto City, we lent an EM culture device to the local community promotion association, and EM materials were provided free of charge to residents. The idea was to purify the water channel by having the activated EM liquid flow from each household. Currently, residents’ associations and volunteer groups in nine districts are involved in ongoing efforts. In addition, local governments and EM volunteers cooperated in 2010 to establish the Shinikegawa Cleanup Group in order to clean up the Shinikegawa, which is said to be perhaps the dirtiest river in Tokushima Prefecture. Every year they release 30,000 EM Bokashi mudballs into the river.

Recently we see more ducks and coots arriving to take a rest at the Shinikegawa River. Furthermore, a budget from the Board of Education has allowed almost all the elementary schools in Naruto City, and two junior high schools with 50m swimming pools, to clean their pools using EM. and they are pleased that it has become a lot easier to keep the pools clean than before. The following table summarizes the results of activated EM solution and EM Bokashi mudballs distributed to citizens by the Naruto Federation of Environmental Health Associations and volunteer groups with the assistance of Naruto City, and put into rivers and waterways.

I feel big changes coming as we continue our activities. One of them involves the Muyagawa River. Eelgrass grows in the Muyagawa in front of Naruto City Cultural Center, which is the mouth of the Mizuogawa River, and is likely to become a treasure trove of fish in the near future.
Another great pleasure for me is the settlement and breeding of storks, which are said to bring happiness and which as a species are a designated national natural treasure. Storks are nesting in Bando-cho, located in the western part of Naruto City, and chicks have hatched there every year since 2017, with seven birds currently living there.
They fly to the Oshirodanigawa River flowing beside EM Kobo Oshiro shop in search of food.

Furthermore, in January this year, I saw many of their companions come to Shinikegawa to rest and feed there. With the support of Naruto City, EM volunteer groups have been active for twenty years. As a result of these joint efforts over the years, I feel that the ecosystem has been greatly improved and many birds, fish, etc. have returned to the area.
We are extremely grateful to EM.
(December 12, 2019)