#92: EM Functions to Break Through Limits

The initial goal of EM was to deal with problems generated by the continuous use of chemical fertilizers and pesticides, problems such as salt accumulation, harmful pests and damage done by continuous cropping. At first glance these three issues seem unrelated, but there is a point in common that leads to all three forms of damage. In other words, soil in which such damage occurs is, without exception, dominated by putrefactive mold and harmful bacteria.


Therefore, if we fumigate with poison gas, such as chloropicrin and methyl bromide, and kill them all, the above issues in the soil will be resolved in one fell swoop. High heat treatment will achieve the same effect. However, even if it takes a different form, the mechanism of this sterilization and insecticidal leads to strong oxidation (free radicals), and afterward a very oxidized environment will remain.

Thus, after this kind of treatment, there are overwhelmingly favorable conditions for microorganisms that prefer oxidation, and very adverse conditions for anti-oxidative microorganisms. That is, since most of the pests belong to the group that prefer oxidation, each use of insecticide will promote the occurrence of harmful pests, and eventually there will be a vicious cycle that produces resistant pests.

Once you understand this kind of background, a beginner’s sort of bright idea will occur to you. In other words, it would be good to increase the microorganisms belonging to the good bacteria artificially, producing a soil micro flora in which good bacteria predominate. Certainly that’s right, and the basics behind the application of EM are based on the same idea. However, when one puts EM into actual use, things are not as simple as a beginner would imagine.

The EM we use at present is the result of a number of extremely fortunate occurrences, and at that point I was full of satisfaction that as an agronomist I had filled my responsibility to society. In other words, I was able to solve the fatal flaw of chemical fertilizers and pesticides, dramatically develop Nature Farming and organic farming, protect people’s health and enrich the ecosystem, and decisively allow agriculture to manifest its true nature of actively preserving the environment.

Use of EM brings about a number of eye-opening results: an increased yield and high quality that exceeds traditional expectations, and a significant environmental adaptability to heat, cold, drought and heavy rain. It was originally thought to be because the cultivation environment had been improved to a more desirable state, but we have seen ordinary varieties of rice that usually yield 100 grains per ear have 300- 400 grains, 2-3 cucumbers on a stalk that normally produces only one, 4-5 ears of corn on stalks that normally produce 1-2, and tomatoes and grapes producing multiple bunches, and we have ben able to produce giant vegetables one after another.

As I introduced last month, although it is normally not possible for one banana stalk to produce two banana inflorescences, for years my experimental farm has had stalks with ten or more. I recognize this situation, where forms clearly are tending to higher yield, as the phenomenon of limit breakthrough. The criteria are a yield at least twice as high as normal, over 90% of the crop rated highest quality, and antioxidant levels over twice usual levels. Naturally, taste has to be superb as well.

Crops use sunlight as an energy source to conduct photosynthesis, with yield and quality are all determined by the total photosynthesis ability. Pests and the impact of various environmental factors will have a significant impact on photosynthesis ability, but with limit breakthrough even if inhibitory factors are completely eliminated, remarkable effects will emerge that far exceed expectations. In other words, even if there is no damage by pests, and no other harmful environmental factors, if you assume a level of 100 as a normal good harvest, with limit breakthrough a phenomenon will occur that is impossible according to conventional wisdom, with crops reaching 200 on this scale.

The results of photosynthesis are all determined by the flow of electrons. That is, it depends on the rectifier force. EM has the power to rectify radioactivity and convert it to useful energy. Foliar application of EM improves the rectification of plant leaves, allowing them to use light that could not be utilized previously, capturing and utilizing the energy from the ultraviolet and infrared spectra.

Naturally, because the absorption of nourishing moisture is also determined by the flow of electrons, applying EM to the soil increases the rectification force. There has been discussion about whether it is best to use EM in the soil or in foliar application, but it is best to use it for both.

Another aspect that supports limit breakthrough involves a minimizing of crop respiration through EM’s enhancement of anti-oxidizing power. When crops are placed in unsuitable conditions such as overly high or low temperature, there is a mechanism whereby they protect themselves by changing already synthesized photosynthetic products into energy. There are many examples of negative energy balance when ultraviolet light is strong at high temperatures. Energy consumption is an oxidation phenomenon, so a high antioxidation level in a crop means it will not waste energy.

The photograph are an example of limit breakthrough with tomatoes in the Sunshine Farm operated by the EM Research Organization. I utilize liquid organic fertilizer made with seawater, and Activated EM also made using seawater (foliar spraying done once a week at a 1:50 dilution). Normally at the end of the year, such as the season we’re in now, lower leaves wither or become diseased and are removed, but since we’ve begun using seawater starting this year, the situation in the entire greenhouse has become more stable and secure. 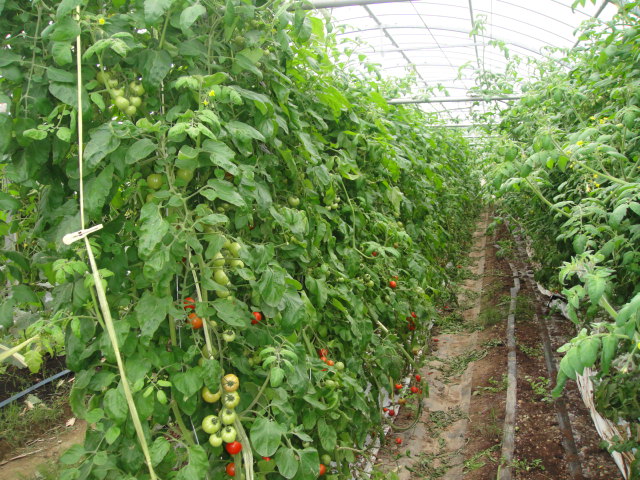 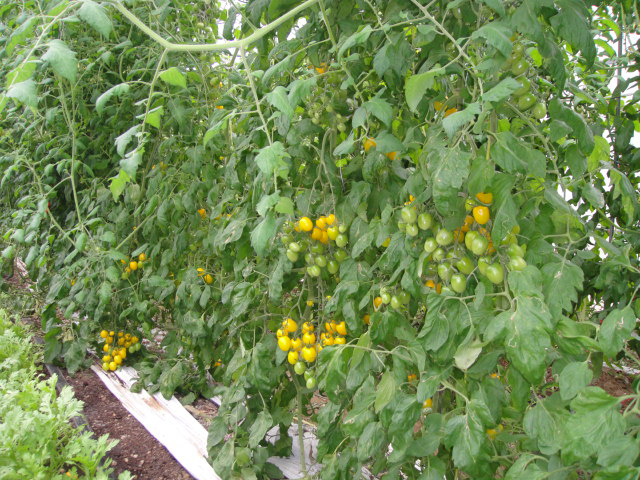 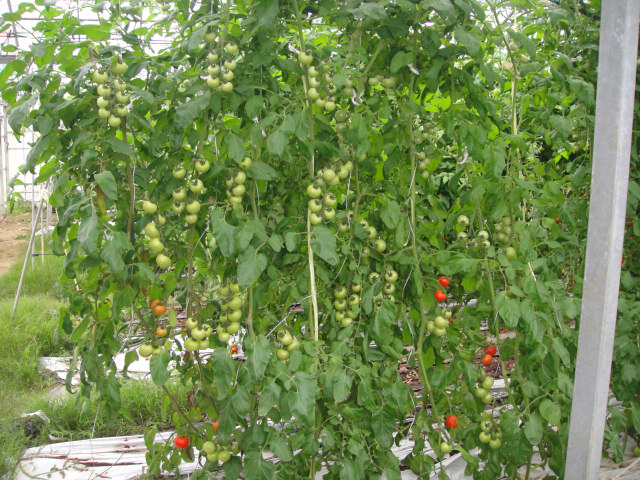 One bunch has multiple fruit and significantly larger fruit.