Takahashi Orchards and their history

Takahashi Orchards has been committed to fruit tree cultivation for over 20 years. They are located in Higashine, Yamagata, where the largest amount of cherries in Japan are produced. They grow cherries, peaches, pears, and apples, using EM.

It was in 1995 that Mr. and Mrs. Takahashi first met EM. As they were searching the ways to farm without chemicals, they found EM grown cherries. They were surprised by the taste and look of those cherries, and decided to study EM farming. It took them 1 year to learn about EM farming.

2 years later, it rained heavily and continuously in June, 1997. The rain water was pooled in their cherry orchard for 10 days. In the neighboring orchards, cherries rotted and got moldy. However, in Takahashi Orchard, the branches of their cherry trees were heavy with fruits, and the cherries were colored red. To their surprise, the cherries tasted wonderful, too. This incident convinced them that EM farming was what they should pursue.

The most important thing in their farming is the soil. They make soil with EM Compost and EM Bokashi. Using the power of fermentation of beneficial bacteria, they cultivate the soil, enhance the vitality of trees, and lovingly nurture them in order to provide safe and delicious fruit to everyone.

Recently, they started using EM charcoal as well to revitalize the trees that had lost their strength, EM charcoal was placed around the base of trees. A few months later, they checked the tree base, and found so many feeder roots! There seem to be many earthworms under the charcoal, because chickens peck around the charcoal to eat them.


When the first spring had come since the use of EM charcoal, gigantic buds appeared in the orchard. 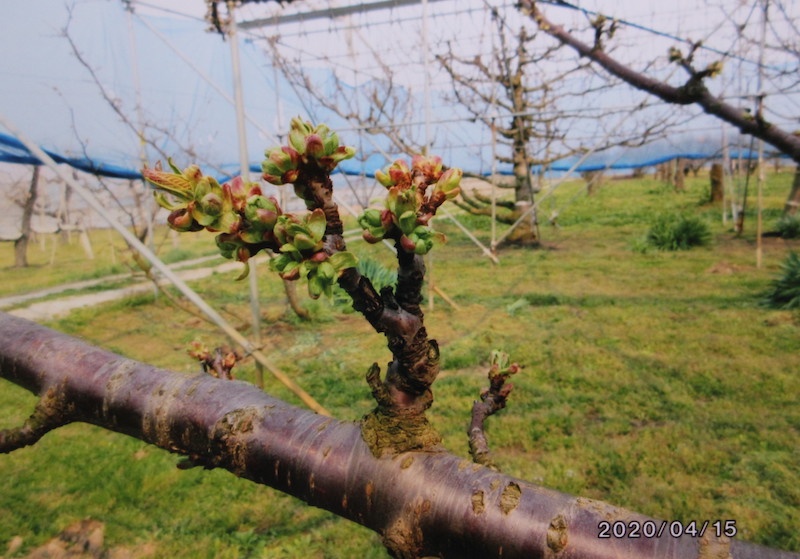 Look at the size comparison.
The branch in Mrs. Takahashi's hand was taken from another farm. 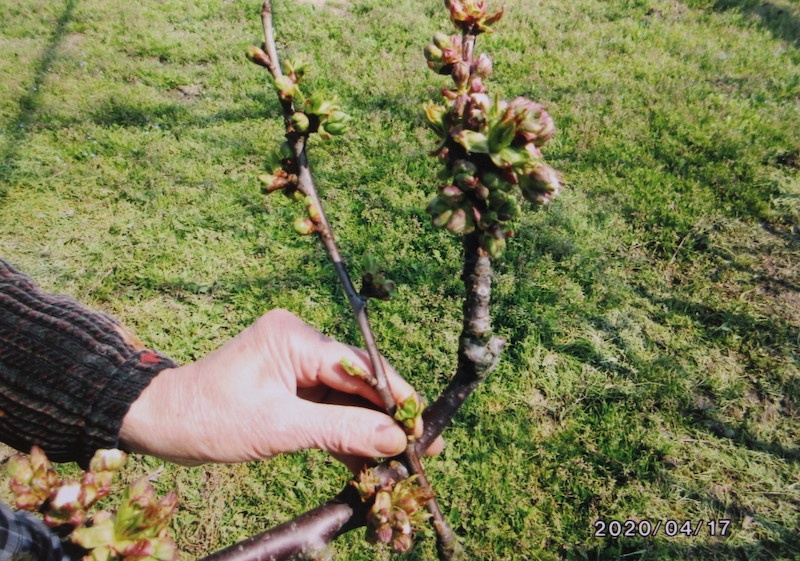 These are the cherry blossoms. 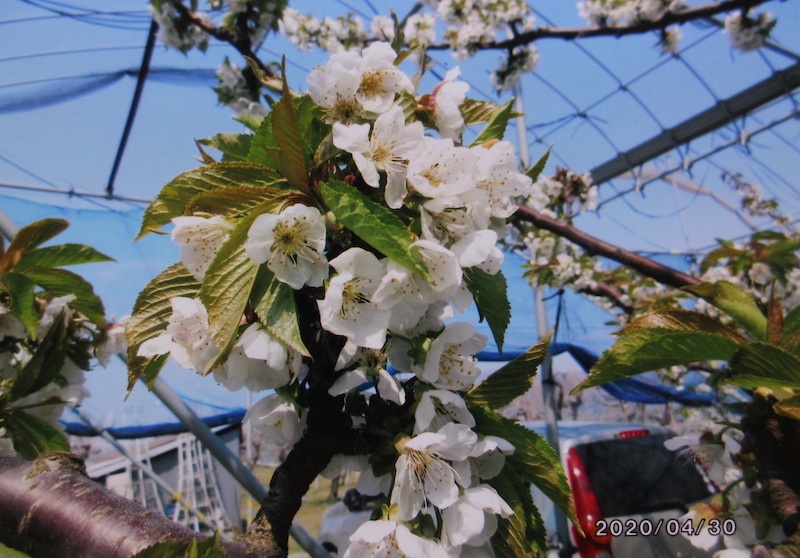 “Satonishiki” cherry is originally a species that bears fruits in small sizes. However, using EM for more than 20 years and using EM charcoal resulted in these enormous flowers.

And look at the cherries!
They shine like jewels. 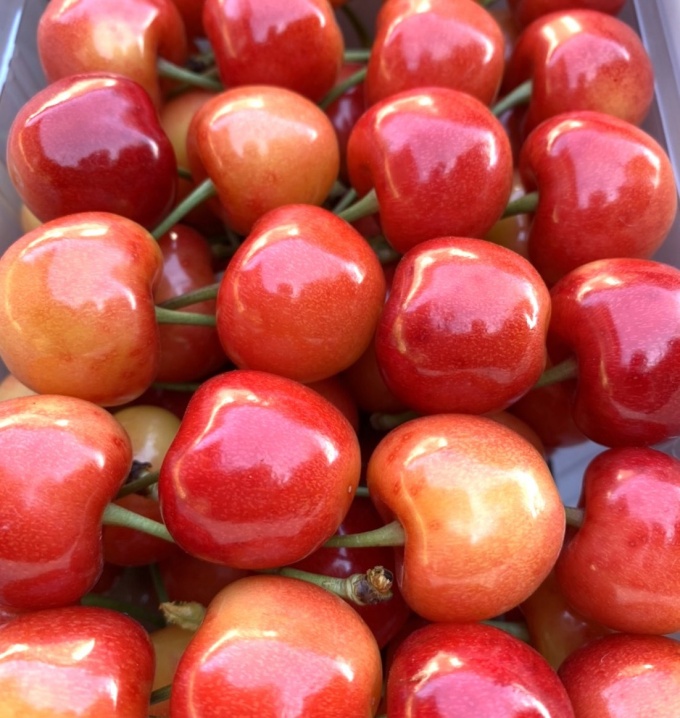 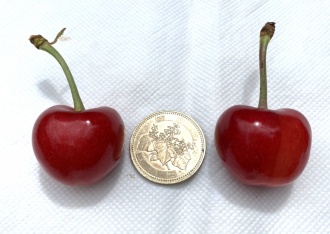 Using EM in the orchard brought an interesting effect.
When snow piles up in the orchard, which lacks a roof; compared to outside the orchard the snow melts and disappears quickly, revealing a clear boundary. Not only the soil, but also the ground has been treated with EM, charcoal, salt, etc., so it is healthy for trees and people, and the orchard is a refreshing and comfortable space to be.


Further, since all the pruned branches at the orchard are turned into charcoal and then used, the orchard’s cultivation takes into account the reduction of CO2 emissions.
Their attempt to reduce CO2 emissions by making EM charcoal using smokeless carbonizers made a newspaper article on Yamagata Newspaper. 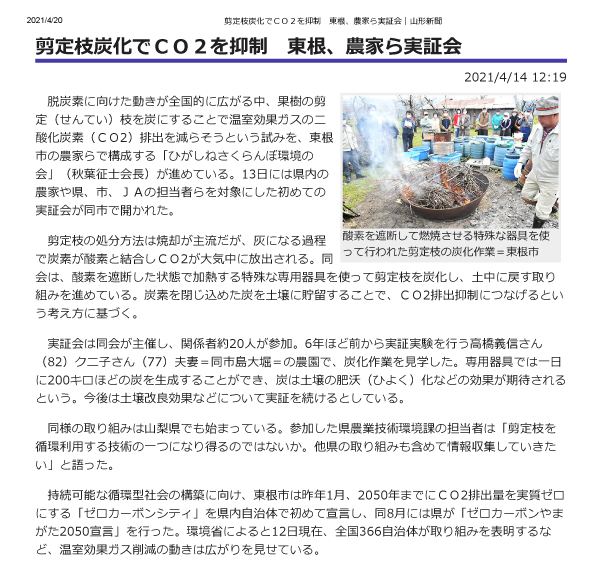 Reducing CO2 Emissions by Carbonizing Pruned Branches: A Workshop by Farmers in Higashine Demonstrates How it is Done

Photo caption:
Carbonization of pruned branches in Higashine City using a special device that shuts off oxygen and burns them

As the movement toward lowering carbon levels spreads nationwide, the Higashine Cherry Environmental Association (Chairman: Seiji Akiba), consisting of farmers in Higashine City, is taking steps to reduce the emission of carbon dioxide (CO2) from greenhouse gases by turning the pruned branches from fruit trees into charcoal. On the 13th, the first demonstration was held in Higashine City for farmers in Yamagata Prefecture and officials from the prefecture, nearby cities, and JA (Japan Agricultural Cooperatives).

The normal method of disposing of pruned branches is to incinerate them, but in the process of turning them into ash, carbon is combined with oxygen and CO2 is released into the atmosphere.

The Higashine Cherry Environmental Association is working to carbonize the pruned branches using special equipment that heats them while blocking oxygen, and then return them to the soil. The idea is that by storing carbon-encapsulated charcoal in the soil will lead to a reduction of CO2 emissions.

The demonstration was organized by the Association, and about twenty people participated. They observed the carbonization process at the orchard owned by Mr. Yoshinobu Takahashi (82) and Mrs. Kuniko Takahashi (77), who have been conducting demonstration experiments for about six years. The special equipment is capable of producing about 200 kg of charcoal a day, and the charcoal is expected to be effective in improving the fertility of the soil. They plan to continue to demonstrate the effects in improving the soil.

A similar initiative has been launched in Yamanashi Prefecture. An official of the Agricultural Technology and Environment Division of the prefecture who participated in this project commented that, “I think this could be one of the technologies used to recycle pruned branches. I would like to collect further information, including efforts underway in other prefectures.”

With the aim of building a sustainable recycling society, in January last year Higashine City became the first municipality in the prefecture to declare itself a “Zero Carbon City,” with the goal of reducing its CO2 emissions to practically zero by 2050. In August of the same year, the prefecture issued its “Zero Carbon Yamagata 2050 Declaration.” According to the Ministry of the Environment, as of the 12th, 366 local governments nationwide have announced similar efforts, and the movement to reduce greenhouse gas emissions is clearly spreading.