One of the most remarkable reports in EM application case studies in Japan is the Todaiji Temple, which was built in the begining of the 8th century and is famous for the "Great Buddha in Nara".
They are using EM Technology with excellent results not only for water treatment of the pond inside the Temple but also for the recovery of pine trees and elimination of foul odor of septic tanks and deer excreta.
EM Technology is also used for environmental protection of shrines and temples near Todaiji Temple and even in some other areas registered as the World Cultural Heritage.

Good effect of EM Technology made Todaiji Temple very serious
The manager in charge of general affairs at Todaiji Temple had tried many methods to find the best system to improve the water condition of the pond before he came to know about EM Technology through Ms. Kazuko Goto, the representative of Non-Profit Organization U-net for Nara Prefecture to him.

Ms. Goto, together with other U-net members, had been involved in purification programs by way of EM Technology with good result at Class A Komo River which is a part of Yamato  River System running in the City of Nara.

After the manager of Todaiji Temple received some advices from Ms. Goto, he did some research by himself on cases of EM application. Occasionally he visited the actual sites to investigate the effect of EM Technology, and 6 months later, in December 2007, he concluded that EM could contribute to the environmental purification.
Therefore, he purchased and installed an EM Bio-reactor and a fermentation tank to introduce EM Technology in the temple facilities.

From January of 2008, Activated EM•1 was poured into 3 ponds (Ooyuya-Ike, Naga-Ike and the most downstream, Kagami-Ike) but mainly into Kagami-Ike alongside of the approach to Buddah's Hall from Nandaimon (Great Southern Gate).

During this project, 3 staffs from Todaiji Temple were allocated to the actual work for EM application and EM Suketto-Net Co., Ltd. (in Nagoya City represented by Mr. Masanori Oka), which was experienced in EM Technology application, was in charge of device management and work planning. 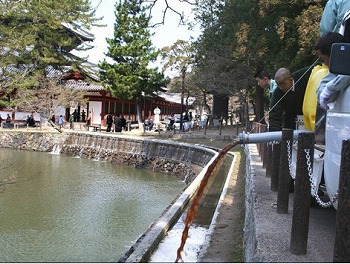 Activated EM・1 was poured into Kagami-Ike directly from the tank on the lorry. 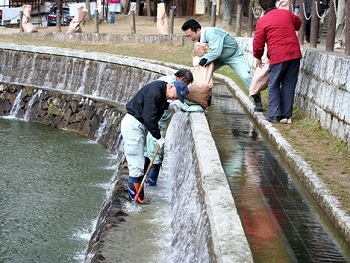 Activated EM・1® was poured into the water channels connecting each pond as well.

Approximately 500 L of Activated EM•1 was poured into each Pond weekly. The result was remarkable.
No E. coli bacteria were detected at Kagami-Ike and the transparency improved to 50 cm about 3 months after the application. As a result of the continuous efforts such as placing EM Ceramics at water channels, the summer troubles such as freshwater red tide and foul odor produced by algal blooms were solved.
In the meantime, volunteers and children of Todaiji Temple Gakuen Kindergarten made about 2,500 EM mud balls and threw them into the ponds and water channels. 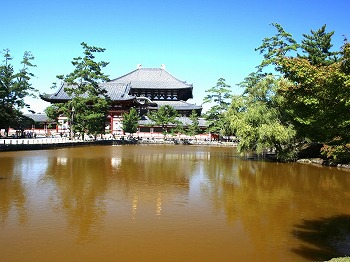 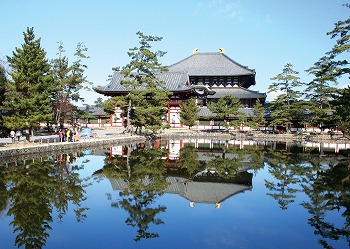 At first Mr. Oka expected that it would take at least 3 years to have a good result; however, it turned out to be only 1 year. Kagami-Ike is usually muddy when it rains to soiled water flowing from the upstream when it rains, but apparently, it returns to normal in a shorter time than before. The quality of the soil at the bottom of the pond is getting better thanks to the 5,000 EM mud balls thrown into the pond in 2 batches one year before.

Kagami-Ike used to have a stage in Japanese-garden-style, sticking out towards a small island (Nakanoshima) in the middle of the pond and it was necessary for the water to be cloudy to a certain extent in order to screen off the ground of the stage. However, the water tended to remain muddy for a longer time than is necessary. Moreover, an artificial waterfall that is to circulate and to filter the water located in the northwest of the pond dag up the algae deposited at the bottom of the pond, which diffused a foul odor.
Approximately 300kg of EM Ceramics were placed at this location this spring, and as a result, the foul odor disappeared and the water clarity improved up to 0.5-1 m.

Now ripples like fine wrinkles sparkling on the surface of the pond can be seen anytime. This is a typical found only in a pond with a good water quality. The reflection of Buddah’s Hall and pine trees at the pond can be seen on the surface of the water which brought Kagami-Ike back to what it was supposed to be in a sense that “Kagami” means “mirror” in Japanese.
Todaiji Temple requested a third party to compare pre- and post-data of the water quality.
Also, Mr. Oka and Ms. Goto collect water samples a few times a month to analyze water clarity and quality. 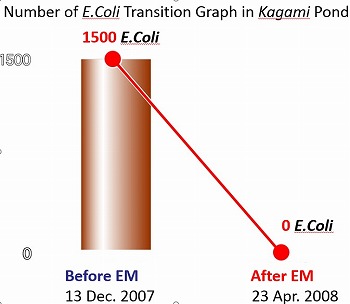 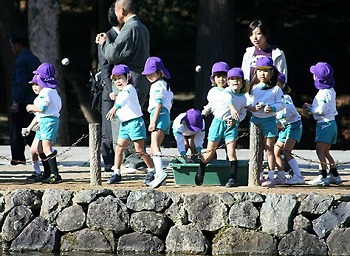 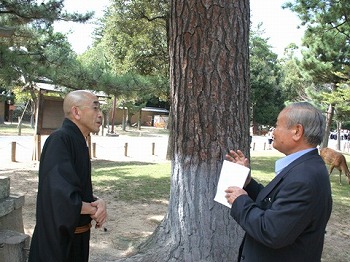 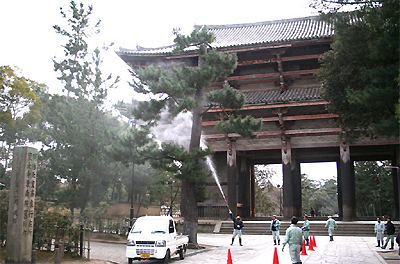 Other than the water improvement project, last year, they tried to revive approximately 200 pine trees, planted along the road from Great Southern Gate to Buddah’s Hall as a countermeasure against pine wilt disease. As a result of the continuous efforts in applying EM Ceramics Powder to trunks of the trees and spraying Activated EM•1 to the roots and the entire trees, “The tip of the branches grew and new shoots sprouted up in April to May this year with the smell of fresh green plants”, said Mr. Oka. They have a plan to give this tree treatment twice a year on more trees from now on. 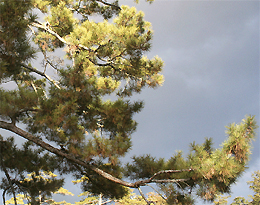 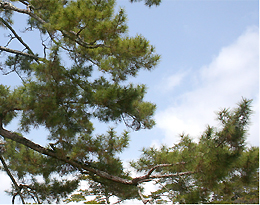 There were a lot of dead leaves before EM             Leaves became greener after 3 months.
was applied.

The garden of Todaiji Temple has a lot of wild nature deers and therefore, they are also dealing with excreta odors problems.
Staff at Todaiji Temple sprayed Activated EM•1 once a week, from a tank on a pickup truck around the Great Southern Gate where more deer are to be seen than any other areas the deer gather. "You can see an obvious effect in reducing odor in 2 months", said the staff. The owners of stalls alongside the approach to Buddah's Hall are pleased with this "good deodorization effect". 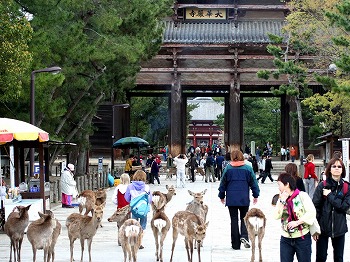 Wild deers around the temple causing foul odors with their droppings 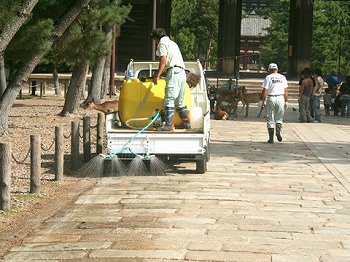 Furthermore, Activated EM•1 is applied in many different ways inside the Temple such as septic tank treatment, kitchen waste recycling, and tree planting. EM Ceramics are put at the temizuya (a Shinto water ablution pavilion) of Nigatsu-do. 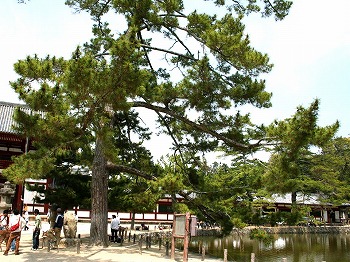 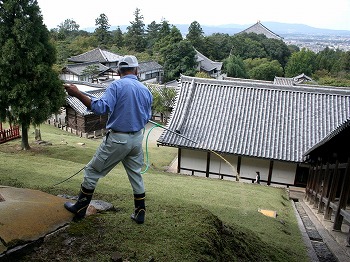 In June 2009, an unusually large numbers of fireflies were to be seen at the downstream of Oyuya-Ike. This news delighted those who involved in the “Association of Daibutsu Firefly Preservation”.
They could see that their preservative activity of long standing and EM applications came to fruition.

EM spreads to other shrines and temples
Mr. Goto thinks that this project at Todaiji Temple triggers a movement of environmental purification.
There remains some wild forests co-existing with the city area in Nara City; however, in addition to the fact that the mountains in the area cannot deal with water resource anymore. The damages caused by acid rain, deer, and the poor maintenance accelerated forest devastation. As a result, muddy water flew into ponds and rivers after rainfall and the environmental condition got worse. In addition, the deterioration of water quality at ponds is a problem not only for Todaiji Temple. Mr. Goto is appealing for local authorities and Kasuga-taisha, and other shrines and temples on this issue as a starter of the environmental purification and protection for the whole community. 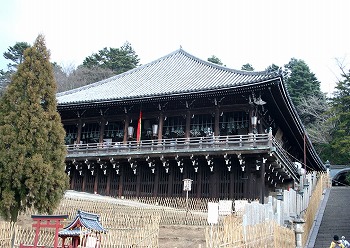 EM Ceramics is mixed with purification water at Nigatsu-Do.


Responding to the appeal from Todaiji Temple, Jurin-in Temple (the chief priest, Junshin Hashimoto), located in the Gangoji-Temple which is one of the seven great temples in Nara, has already started using EM Technology to clean its ponds.

It has been 17 years since “Historic Monuments of Ancient Nara” was listed as one of the World Heritage. Next year, 2010, is the 1300th anniversary of the relocation of the capital to Heijo-kyo and also the 1250th Anniversary of Empress Komyo who got deeply involved in construction and maintenance of various temples such as Todaiji-Temple, Kofuku-ji Temple, Horyu-ji Temple, etc.
Recreation of the capital city of Nara referred to “City of Flowers” on the surface of ponds with ripples was a dream not only for Nara citizens but also many other people including those engaged in the pond purification project. 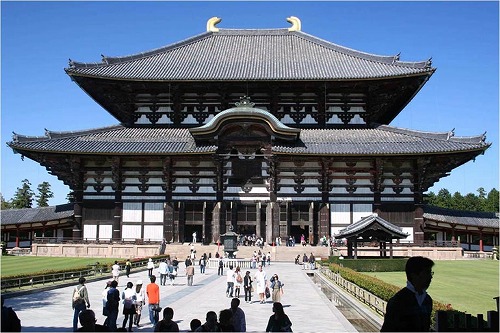 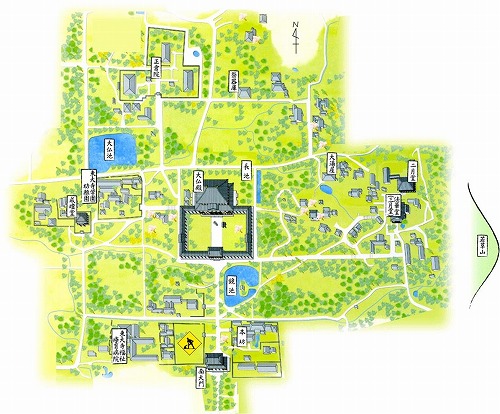 Map of the temple and surrounding gardens