Partner in Uruguay on the Japanese TV Program

Mr. Takahito Mikami is a Japanese man that started promoting EM Technology in Uruguay.
He is also well known in Uruguay because he has been dedicated to expand the forestation of eucalyptus and pine tree. The forest covers an area of 800,000ha today thank to the work of Mr. Mikami who is known as the "Father of the Foresty".

Mr. Mikami was featured in a Japanese TV program broadcast on April 25th 2014, highlighting his life as a Japanese man who emigrated to Uruguay. 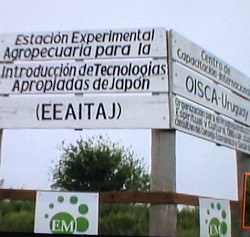